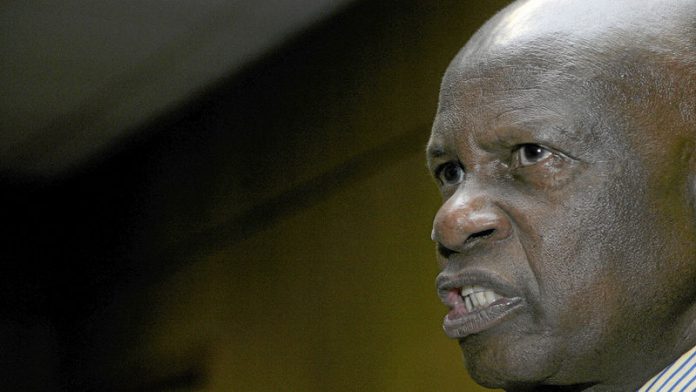 If there was any doubt concerning Zimbabwe's precarious financial position, Chinamasa revealed it all. The economy is dead, he said. But he quickly said a new one is being built though he gave few ideas on how this is being done. Last month he postponed the budget announcement, traditionally held in November, to enable him to consult extensively with other stakeholders.

"In 2014, the economy is projected to record strong growth of about 6.1%, premised on an active Zim Asset programme policy anchored on strong recovery of agriculture and improved performance of mining and construction sectors," said Chinamasa. Pressure had been brought to bear on Chinamasa last weekend by President Robert Mugabe, who subtly admitted to the tight fiscal space and directed him to come up with a better budget, during his address to delegates at Zanu-PF's annual conference.

"Find money, Chinamasa, you can't say there is no money … The budget must tell a new story. Those who work must be paid above the poverty datum line. We can't really be at peace with our hearts if we say our people must continue to work for next to nothing," said Mugabe.

Civil servants have proved to be the biggest headache for Chinamasa. Salaries alone gobbled about 70% of the budget. Zanu-PF is careful not to reject outright demands of salary increases from civil servants. It promised them huge windfalls during its election campaigns. Then came the diamonds that government hoped would finance a large part of the budget.

In a bid to reduce the opaqueness of the diamond industry, Chinamasa announced a raft of measures that will include surveillance of sorting, packaging and transportation of the diamonds, revenue sharing between government and diamond companies, and the introduction of royalty and revenue fees, which would be paid directly to the government coffers. Ironically, government itself is already a major shareholder in most of Zimbabwe's diamond companies.

'Methodical system'
To the financial sector, the industry and ordinary members of the public who have not been able to access their cash in recent weeks, Chinamasa proposed a "sequential and methodical system" to restore confidence in the financial services sector. These measures include the capitalisation of the troubled Reserve Bank of Zimbabwe. Government committed itself to take over the RBZ's $1.35-billion debt.

The AfreXim bank will assist with $100-million to capitalise and revive the interbank system.

Perhaps the biggest and clearest confidence booster was Chinamasa's reaffirmation that the Zimbabwe dollar is not returning. Several times in his speech he returned to the discarded local currency, even saying it would be demonetised, to quell recent rumours of its possible return. The multicurrency system would be maintained, he said.

Those who lost money during the currency conversion would also be compensated by way of treasury bills.

But on Thursday economic observers poked holes at the budget, which faces a large current account deficit of $3.4-billion and does not introduce any new measures to curb government expenditures.

"The only way out is spending cuts, although difficult to achieve politically or more offshore borrowing. But from whom? China is the obvious option since Harare is not eligible to borrow from the multilateral agencies because of its $7-billion arrears," said Tony Hawkins, an economics professor at the University of Zimbabwe. "Whether the long-mooted Chinese loan will come to the government's rescue remains to be seen."

Chinamasa in his address called upon creditors to consider debt relief.

'Arrogance of our leaders'
Vince Musewe, an independent economist said ZimAsset was unlikely to work "because the assumptions upon which it is based are speculative".

"Our problem is the arrogance of our leaders and this belief that they know best. The sad news is that, once again, it is the poor ordinary Zimbabweans who will bear the full brunt of this arrogance," said Musewe.

Ex-finance minister Tendai Biti, the secretary-general for the MDC led by Morgan Tsvangirai earlier this week said the budget would be "fictitious" as the government was too broke.

Chinamasa used the opportunity to call for the removal of sanctions.

Zimbabwe's manufacturing sector on Thursday looked to Finance Minister Patrick Chinamasa as he announced a largely populist budget for 2014.

But there was not much to bring relief to manufacturers. Chinamasa at least agreed that the industry was in trouble. Capacity utilisation of the sector declined from 44% in 2012 to 39.6% this year, he said.

Shockingly, Chinamasa said the sector is more than 20 years behind in technology. "The manufacturing sector needs retooling," he said. But he predicted the troubled sector would grow miraculously by between 1.5% and 3% next year. He just didn't say exactly how.

Chinamasa said the sector has been hard hit by a number of operational constraints that include a lack of affordable working capital, the unavailability of economic enablers such electricity, antiquated machinery and low domestic demand.

In addition, the lack of long-term funding has adversely affected the sector. Chinamasa admitted that the sector also required expertise, skills, research and development to improve production processes and other economic enablers in order to create employment and increase output.

Although industries had urged the government to spare the sector from the indiginisation law because it was scaring investors, Chinamasa said there was no going back on the law to empower black Zimbabweans.

The secretary general of the Zimbabwe Congress of Trade Unions, Japhet Moyo, last week said scores had been retrenched in the past three months.

"The union has noted unprecedented high levels of retrenchment of up to 150 per week over three months and, in the last two weeks of November, the figure has risen to almost 300 a week." – Farai Shoko