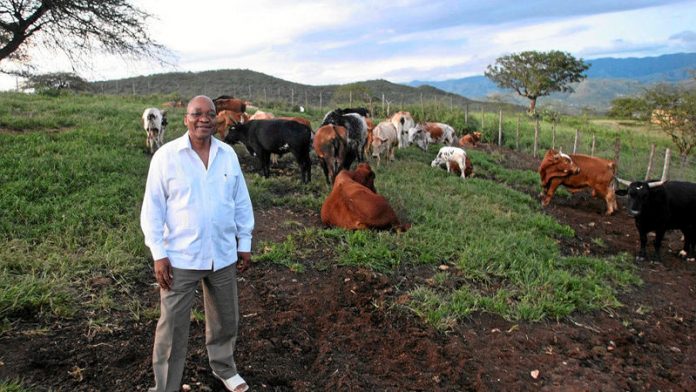 We round up our top viewed multimedia of 2013.

10. Mswati: The king and the bling

It's good to be king in Swaziland. With lavish birthdays and more wives than Maybachs, King Mswati III certainly leads a charmed life. Two-thirds of the Swazi population lives in poverty, but Mswati doesn't feel it – he got his own jet last year. He declared his mountain kingdom a "monarchal democracy" (whatever that means) because of a vision he received from God during unseasonal thunderstorms in the country, just a few days before Swaziland took to the polls in September. Seriously? You can't make this stuff up. Ahead of the Swazi election day, which – surprise, surprise – the bling king won, we took a look at the sweet life of King Mswati.

9. Malema on EFF: Today we give birth to a giant

Never one to miss an opportunity to create a scene, Julius Malema chose to launch his political party, the Economic Freedom Fighters (EFF), close to the koppie where 34 miners were killed by police in Marikana last year. In true Malema style, he arrived in a motorcade flanked by racing bikes and Harley Davidsons (what's that about economic freedom FOR ALL?). In his speech, he compared the Marikana massacre to Sharpville and apologised for once backing President Jacob Zuma, saying the statesman was neither a thinker nor a reader. Heavy words for someone who once famously said he would "kill for Zuma". As almost all Malema content, this podcast of his speech did exceptionally well and made it to number nine on our list. And while EFF seems to be enjoying huge support from South African youth who are tired of Zuma's ANC and their broken promises, it's a pity most of them have not registered to vote yet.

8. Nkandla report: Did we break the law?

Ah, that pesky Nkandla report that just won't leave our president alone. Despite the security cluster's best efforts to stop public protector Thuli Madonsela from releasing the controversial provisional report, someone still managed to leak the it to the M&G's amaBhungane. This resulted in an exhausting to and fro between Madonsela and government. First, the ANC blamed Madonsela for the leak. She then lashed out at the ANC, denying that the leak came from her office and saying that the report was only leaked after she showed it to the five ministers in the security cluster. Amidst all this backwards and forwards, the M&G was accused of breaking the law by publishing details of the leaked provisional report before Madonsela was ready to release it. In this live hangout with amaBhungane's Stefaans Brümmer, the lead investigative reporter of the story answers questions about the legality of publishing details from the public protector's provisional report into Nkandla.

In an act of terrorism that shocked Africa and the world alike, Somalia's al-Shabab Islamist militants launched a four-day siege on Kenya's Westgate Mall, killing at least 67 people. Al-Shabab claimed responsibility for the attack, saying in a statement: "We will strike Kenyans where it hurts the most, turn their cities into graveyards and rivers of blood will flow in Nairobi." Chilling and heart-breaking images emerged from the mall as Kenyan soldiers tried for four days to gain control of the situation, get all hostages out safely and capture the remaining assailants.

6. Nkandla: The developments in pictures

Upgrades to the presidential homestead have come a long way since M&G editor-in-chief Chris Roper and senior political reporter Mandy Rossouw stumbled upon it in November 2009 while interviewing residents of Nkandla on what it was like to have a president for a neighbour. What we first thought would be a R65-million upgrade paid for by state funds has turned into a R200-million renovation, including a swimming pool, visitors' centre, amphitheatre, cattle kraal, marquee area, extensive paving and new houses for relocated relatives. As the four-year anniversary of the M&G breaking the story rolled around this November, we took a walk down memory lane to revisit Nkandla during its humble beginnings and track its progress so far.

South Africans had no qualms about showing the world and its leaders, including US President Barack Obama, British Prime Minister David Cameron and all of his Brics friends, how they really feel about Zuma. Zuma was booed at Madiba's memorial service held at the FNB Stadium in Soweto on December 10, while former president Thabo Mbeki received loud cheers from the crowd. In his first interview, just days after the event, Mbeki speaks to the M&G about Madiba's legacy and the state of leadership in the country. He also dismissed any hopes that he would return to South African politics.

In a press conference with EFF commander-in-chief Malema, he spoke candidly about the ANC, which he jokingly dubs ZANC (Zuma ANC). He said the ANC died after Mbeki was ousted and claims that, contrary to what people may believe about it being "cold outside the ANC", the EFF is heating things up. He then turned his attention to the journalists in the crowd, specifically the SABC journalists, poking fun at them and what he called censorship due to ANC rule. If you have not seen Malema speak, this video would be a must-see. If politics did not work out for him, he could still make it as a comedian.

While this piece was only published this month and amid coverage of Madiba's death and funeral, it rocketed to near the top of the multimedia charts at number three. South African's could not seem to get enough of Zapiro's sharp wit and pen. His comics cut right to the point and his ability to gauge and express what the nation would be feeling at any given moment was uncanny. From Oscar Pistorius to Barack Obama, Zapiro covered it all this year.

2. Ayana V Jackson undresses the past

Artist Ayana V Jackson caused quite a stir with her controversial body of work, Archival Impulse & Poverty Pornography. In the images, Jackson restages archival images from colonial times when the black African body was a source of curiosity and intrigue for Europeans and Africans were treated like objects. The work dealt with some very difficult questions, such as, was Jackson furthering the objectification of the black female body by making this work? In the video, Jackson herself answered the difficult questions as she walked former arts editor at the M&G, Matthew Krouse through her work.

1. Reeva and Oscar in pictures

And finally, the M&G's top viewed piece of multimedia this year was unsurprisingly a piece on Reeva ?Steenkamp and Oscar Pistorius. It was a story that shocked the world when news broke on Valentines Day that paralympian golden boy Pistorius shot and killed his girlfriend, model Steenkamp. It even overshadowed Zuma's less than inspiring State of the Nation address, which took place the night before. What followed was a mass of worldwide speculation as to whether or not the shooting was intentional. Pistorius claimed he thought she was a burglar hiding in the bathroom. Almost instantly, South Africa divided itself into two camps, those for Oscar and those for Steenkamp. The trial was due to commence on March 3 next year and run for 14 days. The indictment listed 107 witnesses for the state, including at least 18 of Pistorius's neighbours in the upmarket housing estate where he shot Steenkamp, a long list of police officers and forensic experts, paramedics, former girlfriends of Pistorius's and several of his family members. This could be the biggest trial of 2014, with the whole world watching Pistorius.