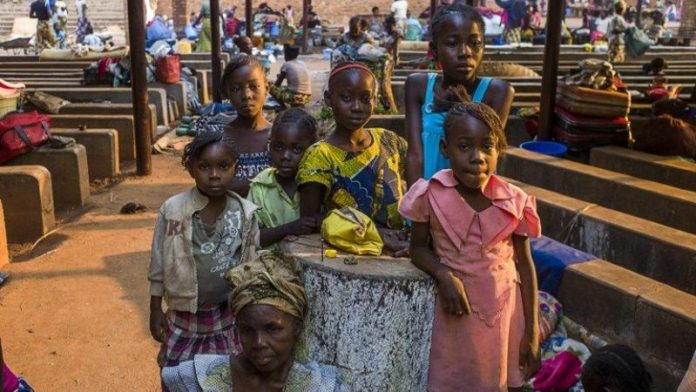 Assailants armed with heavy weapons attempted late on Thursday to attack the presidential palace as well as the residence of the Central African Republic's embattled leader, but were pushed back, officials said.

Reached by telephone, Guy Simplice, spokesperson for President Michel Djotodia, said there was heavy fighting near the seat of government, before the army was able to block the aggressors. Although the attackers could not immediately be identified, for weeks there have been rumors that a Christian militia, believed to be backed by the president, who was ousted by Djotodia in a coup nine months ago, would attempt to seize back power.

The heavy arms fire could be heard from the five-star Hotel Ledger, near the center of town, where international journalists are staying. A rocket came over the hotel's wall, landing on the hotel grounds. As the shooting died down, helicopters could be heard flying overhead.

The events are only the latest indicating that this deeply poor, but until recently relatively stable nation, is tipping into anarchy. Earlier Thursday, international forces were sent to pick up truckloads of decomposing bodies of slain Muslims, whose remains had been left at a local mosque by their friends and relatives, who were too frightened to be seen burying them in a city where Christian-on-Muslim and Muslim-on-Christian attacks have become a daily occurrence.

It also comes a day after the African Union lost six peacekeepers, who were attacked in the Gobongo neighborhood of the capital. Their destroyed car, with at least one calcified body still inside, had not been removed a day later, underscoring how dangerous this chaotic country has become, even for the international forces tasked with pacifying it, said African Union spokesperson Eloi Yao.

As the African Union was struggling to secure that crime scene, they discovered another: Close to the presidential palace, peacekeepers discovered a mass grave.

"We found around 20 bodies in a state of decomposition in an area that we call Panthers' Hill. The 20 were scattered in different graves in a small area. You found five bodies in one hole, three in another, two in yet another and so on," said Yao.

UN Secretary-General Ban Ki-moon said he is "appalled" by the continuing inter-communal violence, including reports Thursday of dozens more bodies found on the streets of Bangui, and called on the transitional authorities "to rein in those fomenting and perpetrating the violence," UN spokesperson Martin Nesirky said.

The UN chief welcomed appeals for peace by Christian and Muslim leaders, reiterated that those responsible for atrocities must be held accountable, and expressed sadness at the deaths of the six peacekeepers and a UN national staff member, Nesirky said.

The Central African Republic has been plunged into chaos, as the country's Christian majority seeks revenge against the Muslim rebels who seized power in a coup in March. Both Christian and Muslim civilians are now armed, and the foreign troops brought in to try to rein in the violence have been sucked into the conflict, accused of taking sides.

The Chadians, part of an African Union force, are Muslim and are seen by the population as backing the Seleka rebels who toppled the nation's Christian president in March. On the flip side, the 1 600 French troops who were deployed here in the first week of December are accused of backing the nation's Christian majority, and their patrols have come under fire in Muslim neighborhoods.

Caught in the middle are civilians, both Christians and Muslims, who are now bearing the brunt of collective punishment. Militiamen have been seen desecrating the corpses of their victims. An AP journalist saw Christian fighters known as anti-Balaka brandishing the severed penis of one dead man, and the hacked-off foot of another. Unclaimed bodies left to rot were found missing their genitals. Another was missing his nose.

The United Nations estimates that 639,000 people out of a population of 4.5-million have been forced to flee their homes. Altogether 2-million people need humanitarian aid – almost half the country.

The barbarity unleashed on the streets of this capital has surprised many. Although chronically poor, Central African Republic was relatively stable for the 10 years following its second-to-last coup in 2003.That military takeover brought Christian leader Francois Bozize to power. Though he was accused of favoring members of his ethnic group, and marginalizing the nation's Muslim minority, who represent just 15% of the population, the country never saw violence on the scale it is witnessing now.

On Wednesday in her home in the Gobongo neighborhood where the peacekeepers were attacked, Elodiane Baalbe spent Christmas hiding underneath her bed, her six children squeezed next to her, in the foot-and-a-half below the mattress. When it finally died down on Thursday, she made a dash for safety, hiding behind houses in her district as she fled her neighborhood.

On her way out she passed the calcified car of a unit of Chadian peacekeepers, the charred body of one soldier still upright in the vehicle inside. The sight was so horrifying that she looked away immediately. "I had my 3-year-old on my back. I looked for a second, and then I kept running," she said. – Sapa-AP