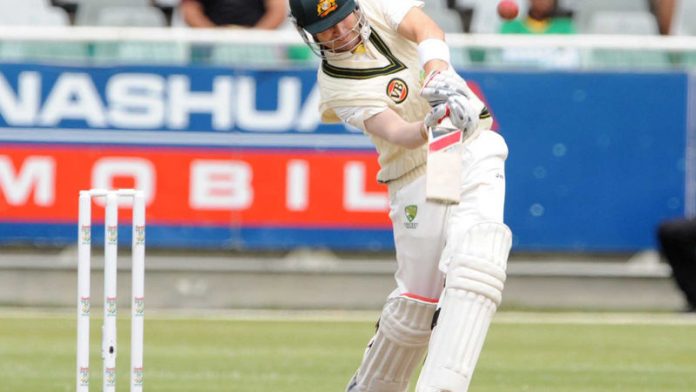 Australia cruised to an eight-wicket win over demoralised England with more than a day to spare Sunday to claim a 4-0 series lead and stand on the cusp of an Ashes whitewash.

Led by a century from opener Chris Rogers and a 136-run stand with Shane Watson, the Australians had few problems getting the required 201 runs on the fourth day to seal England's fate at the Melbourne Cricket Ground.

England contributed to their own demise with two confidence-sapping dropped catches by skipper Alastair Cook early in the day to take all the steam out of the dispirited tourists.

The two fielding blunders from the team leader were psychological body blows for England and evidence of batsman Kevin Pietersen's comments on Saturday in a television interview that the tourists were "mentally fragile".

England now face the monumental challenge of fighting off an Australian clean sweep of the series in the fifth and final Test, starting in Sydney on Friday.

Playing on his home ground, veteran left-hander Rogers claimed his second Test century after scoring 110 against England in the last series earlier this year at Durham.

Rogers, 36, was out caught behind for 116 off 155 balls cutting Monty Panesar, with his team some 31 runs short of victory.

At the end, Watson was unbeaten on 83 with skipper Michael Clarke not out six with Australia 231 for two.

It was the best fourth innings run chase in 51 years at the Melbourne Cricket Ground since England's 237 for three in 1962-63.

While England have been on the end of heavy defeats this Test series, Sunday was a particularly dispiriting loss for England, who were well on top and led the home side by 116 with 10 wickets in hand after lunch on Saturday's third day.

Man-of-the-match Mitchell Johnson and spinner Nathan Lyon staged a dramatic turnaround, with England bowled out for 179, leaving Australia with what became a comfortable task of scoring 231 in more than two days for victory.

It was Australia's fourth consecutive win over England and comes four months after they lost the last series 3-0 in England.

English heads dropped when Cook got his right hand to a snick from Rogers on 19 through slips after wicketkeeper Jonny Bairstow failed to respond, and then grassed a straightforward two-handed chance from David Warner (22) off Stuart Broad.

Warner scored only three more runs before he was caught behind off Ben Stokes and Australia's first wicket came down at 64.

Symbolic of England's malaise, Cook did not bring on his specialist spinner Monty Panesar until 90 minutes into the fourth day and he had little effect on stemming the Australian run flow until he finally removed Rogers.

There will be selection questions ahead of the final Ashes Test for an England team in decline with the most pressure on Panesar, Bairstow, whose technique behind the stumps was exposed, and seamer Tim Bresnan. –Sapa-AFP