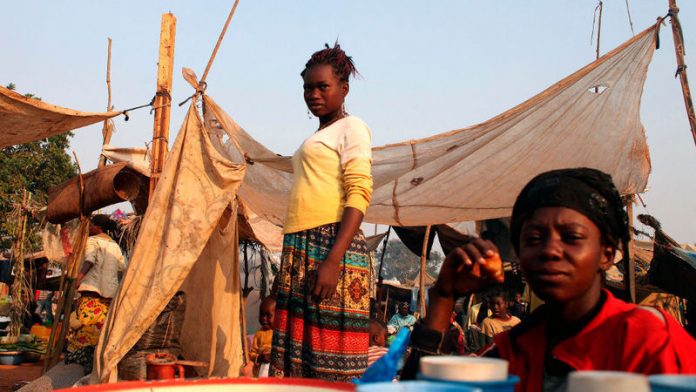 Medical charity Medecins Sans Frontiers (MSF) said on Sunday that it was receiving between 15 and 20 wounded a day at a makeshift camp at Bangui airport in Central African Republic, and has called for urgent aid.

The wounded are the result of fighting in the riverside capital, where the deployment of French and African peacekeepers in early December has failed to halt violence.

Attacks by Muslim Seleka rebels, who seized power in March, and Christian militias have killed more than 1 000 people and displaced an estimated 400 000 in Bangui this month.

The airport camp stretches for kilometres beside the runway. It lacks proper sanitation, as well as supplies of food and water, as UN agencies have failed to keep pace with the scale of the problem, according to MSF.

Risk of epidemic
"If nothing is done in the next two weeks there is a risk of an epidemic breaking out," said MSF airport camp coordinator Lindis Hurum. "MSF demands an increase in the emergency actions being taken by humanitarian agencies."

The camp lacks proper infrastructure and thousands of families are sheltering from the tropical sun under cardboard boxes or makeshift tents made of blankets tied to sticks.

Despite the conditions, a spike in violence in recent weeks has driven tens of thousands of people to the airport. It is patrolled by Burundian soldiers from the African Union peacekeeping force (MISCA) and lies next to a French military base. French troops in armoured vehicles guard the main gates.

"We are short of everything here. Food is scarce," said Samuel Degoto (49), a teacher who fled from his home in northern Bangui with his wife and seven children carrying only a few bags. "If nothing is done before the next crisis strikes, there will be a catastrophe."

Humanitarian appeal
The United Nations launched an appeal on Friday for $152-million (R1.6-billion) to help meet emergency humanitarian needs such as drinking water and sanitation in makeshift camps in the former French colony. It estimates that more than 800 000 people are displaced across the country as a whole.

Bangui was mostly calm for a second day on Sunday, aside from some isolated looting. French peacekeepers blocked an attempt by Christian youths from the northern Boy-Rabe neighbourhood to attack Muslims in the nearby Miskine district, according to a Reuters news agency witness.

The anti-balaka militia have targeted Muslims they say have supported Seleka during months of looting and killing since it seized power in March. With many Seleka gunmen coming from Chad, its citizens in particular have been singled out, prompting their government to organise flights and convoys this week to bring them home.

Chad says it has evacuated about 4 000 of its citizens in the past week.

Many say the bloodshed has little to do with religion in a nation where Muslims and Christians had long lived in peace. Instead, they blame a political battle for control over resources in one of Africa's most weakly governed states.