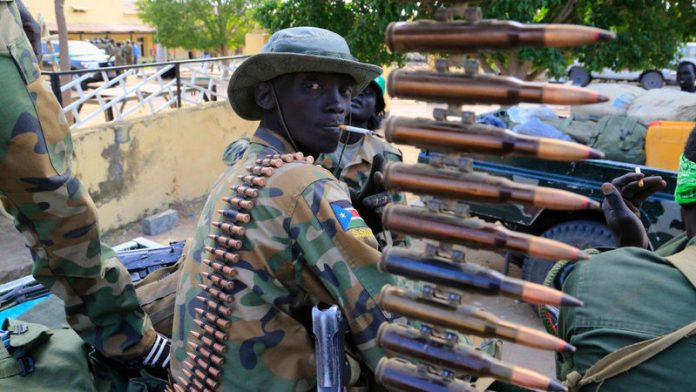 South Sudan's government and rebels sent delegates to peace talks in Ethiopia on Tuesday, officials said, but ethnic fighting raged on in the world's youngest nation and both sides battled for control of a state capital.

Militias loyal to former vice-president Riek Machar fought their way on Tuesday morning into the centre of Bor, the main town in the vast, underdeveloped Jonglei state and the site of an ethnic massacre in 1991, witnesses said.

Machar told the BBC his forces had taken the town while the army said it was outnumbered but still in control of several areas.

Western and regional powers have pushed both sides to end the fighting that has already killed at least 1 000 people, cut South Sudan's oil output and raised fears of a full-blown civil war in the heart a fragile region.

The Ethiopian government said Machar had agreed to dialogue and his representatives were due to arrive in Addis Ababa later on Tuesday.

Machar told the BBC he was not ready to accept the ceasefire demanded by neighbouring states. "We are going there," South Sudan Foreign Minister Barnaba Marial Benjamin told Reuters, referring to Ethiopia.

He added there was no chance of President Salva Kiir agreeing to share power with Machar in talks.

The clashes erupted on December 15 with fighting among a group of soldiers in Juba. The violence quickly spread to half of the country's 10 states, cleaving the nation along the ethnic faultline of Machar's Nuer group and Kiir's Dinkas.

Kiir accused his long-term political rival Machar of starting the fighting in an effort to seize power. Machar denied the charge, but took to the bush and acknowledged leading soldiers battling the government. On Tuesday he said he was also leading the "White Army" militia fighting in Bor.

'Catastrophic conditions'
Ugandan President Yoweri Museveni said on Monday east African nations had agreed to move in and defeat Machar if he rejected the ceasefire offer, threatening to turn the fighting into a regional conflict. There was no immediate confirmation of the pact from other nations.

Bor was briefly seized by the rebels early in the conflict before being retaken by government troops after several days of heavy fighting. "The town is still partly in our hands and partly in the hands of the rebels," Mayor Nhial Majak Nhial told Reuters on Tuesday from the government's military headquarters inside Bor, 190 km north of Juba by road.

About 70 000 civilians have fled Bor and sought refuge in the town of Awerial in neighbouring Lakes state, with no access to food, clean water or shelter, medical charity Medecins Sans Frontieres (MSF) said. Others were hiding in swamps. "Living conditions are verging on the catastrophic," MSF said.

Fighting across the country has displaced at least 180 000 people, including 75 000 seeking refuge inside different UN bases, according to UN figures.

The African Union said late on Monday it was dismayed and disappointed by the bloodletting that came two years after South Sudan won independence from its northern neighbour, Sudan. The AU's Peace and Security Council said it would "take appropriate measures, including targeted sanctions, against all those who incite violence, including along ethnic lines, continue hostilities [and] undermine the envisaged inclusive dialogue".

South Sudan's neighbours have given the warring sides until Tuesday to lay down their arms and begin talks, without giving a precise time when the deadline would end. – Reuters