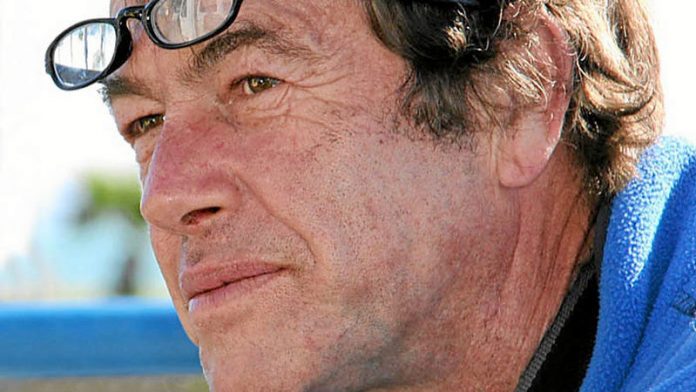 My first encounter with the work of David Rossouw (1959-2013) was in the form of an almost impenetrable steel security gate at the front door of my then-boyfriend, now ex-husband's house on the border of Brixton in Johannesburg.

Rossouw, a longtime friend, was an artist who specialised in metal sculpture work and had constructed a lattice-work of devices (bars, gates, cages for the hi-fi) in and around the home, a zigzag of strange geometries and fantastic creatures to guard us. There was a spider web on one window; a flying pig, I think, on another. Later, Rossouw built us a fence, the likes of which had never been seen in that particular suburb. It was a massive mural of rusted steel; he twisted palisade and spikes into beautiful, almost Gothic frighteners. It was unashamedly bizarre. People would stop and stare.

I still live in a Rossouw house (although not the same one); there are steel angels on my balcony and a metal cowboy shouting yee-ha from a gate. Rossouw wrought many (and also, not enough) such domestic transformations in his time.

There are a handful of public places where you can see his work – I can think of the Bus Factory on President Street in Newtown, Moyo at Zoo Lake, and on the fence of the Melrose Dental Centre at 82 Corlett Drive (who says all dentists are predictable?). There are other locations too, some outside the city. But for the most part it is private homeowners, friends of Rossouw's, who have become the custodians of his body of work.

Fine artist
Rossouw studied fine art at the University of the Witwatersrand; he would have encountered a number of renowned lecturers at Wits and during earlier classes at the Johannesburg Art Foundation: William Kentridge, Bill Ainslie, Robert Hodgins. He majored in graphics under Giuseppe Cattaneo, whom, his mother Clare tells me, he "greatly admired".

After graduating and working for a short while in the United States, Rossouw came back to South Africa and took up a position in Venda, where he built strong creative relationships (and friendships) with artists such as Jackson Hlungwane and Noria Mabasa. He became regarded as an expert in the field of Venda art, and was cited by sources ranging from art academics such as Anitra Nettleton to the New York Times.

One of David Rossouw's wrought-iron creations adorns the entrance tower of the Kagiso Mall. (Sally Shorkend)?

Clare, a retired teacher, says that her son had been "incredibly impressed" by a book she had once taken out from the education campus library, on rhyme and rhythm in African art. The book said that African art is "mostly an art of rhythm and movement, and even when [artists] worked in different materials they chose things like clay – and they wouldn't bake it very hard – so that it could disintegrate over time and would not [provide] an oppressive heritage for young, and up-and-coming, artists."

She said that Rossouw liked that idea very much and went on to justify it – "that bronzes, terracottas were buried; that Western tradition was to have these art museums and be terribly proud of this long heritage. But not in African art."

When Rossouw finished his studies, he decided to focus on sculpture rather than graphics. "He said he liked steel because it wouldn't last so long," recalls Clare. "He didn't like [the steel] to be varnished or painted. He liked it coated with rust – which, to some extent, protected the metal. But he hated it when people tried to make it last longer – longer than it would naturally."

A doer
Rossouw, typically, liked to do things quickly. Andrew Lindsay, founder of Troyeville's Spaza Art Gallery, who worked with Rossouw on a number of large projects over the years, says he "never sat around or contemplated too much. It was more in the doing. He was a doer. There wasn't great meaning or philosophical discussion around things; it was more about the practicalities."

"Rossouw was always keen to solve things the best way he could," says Lindsay. "He had an engineer's mind: scientific. It used to be a bit above me. I tend to be more artistic. He never asked: 'Should I put the leaf to the left or to the right? Is this okay?' There was none of that anxiety. He would just get on with it and you would know it would be fine."

Lindsay says he "always saw Davey like a superhero character. A lot of the work he did was in the face of sorrow, anguish, of people's houses being broken into. Every time, without fail, he would fly in. And within an hour he would sort something out. Mister Superman, saving all these people who were in a state. He would make them feel good and give them something beautiful – make them feel a bit less anxious about security and about life."

Protector of life
"Rossouw cared deeply for people," says Lindsay. "But he was always in a rush, always busy with something else. Even when we were working together, he'd pop in and say: 'No, man. Hell. I've got an emergency. I'm going to go and sort them out.' He would drop everything and 'fix them up'. There was a tremendous valuing of life, a protecting of life. It was innate."

Another clue to this persona was his nickname, Sirtinly. "The play of that is the key," says Lindsay: Rossouw as a knight in rusted armour. "David called his business Sirtinly Steel. The idea of that: Certainly, David would come." Rossouw died on October 22 after a long battle with cancer. He is survived by his wife, Kathi, and his two children, Christopher and Genavieve.

Towards a People’s Vaccine Campaign: A call to action