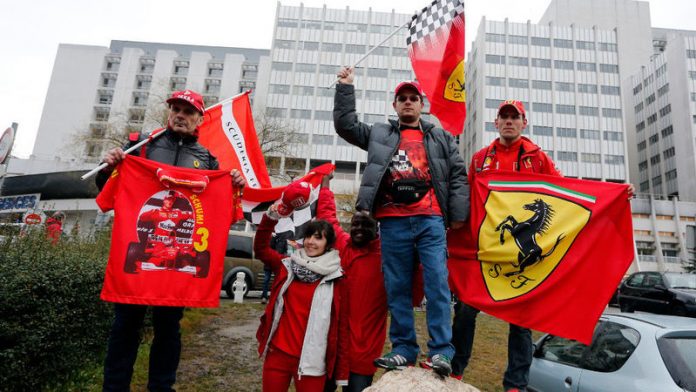 Michael Schumacher's fans gathered at a hospital in the French Alps on Friday to honour the Formula One great on his 45th birthday.

A few dozen fans assembled outside the medical facility in Grenoble where Schumacher has been undergoing treatment since falling and hitting his head on a rock on Sunday while skiing off piste in the resort town of Meribel.​

Busloads of fans from Italy, where he anchored the Ferrari racing team, France and Germany headed to the hospital in Grenoble where he is being treated.

Gulio Carissimo drove for four hours to reach Grenoble. Wearing a Formula One Ferrari jacket and hat, he said he felt compelled to come. "With all the joy he has given us with his victories, we had to be there," he said.

"For us Ferrari fans, we are just like brothers, we are just one," said fan Carlo Buschini, who raised his cap and blew kisses in the direction of Schumacher's hospital room. "We are here to celebrate and to celebrate his battle for life," he said.

Supporters of the Scuderia Ferrari Club wore red and carried a banner reading "Schumi, all our thoughts for you and your family."

Online support
Ferrari wrote in a blog post on its website that Schumacher was "tackling the most important fight of his life" and sent him "double wishes" for his birthday.

"Happy birthday my brother Michael! Be strong!! Be strong!! Don't give up!! We are praying for you," wrote Brazilian Ferrari driver Felipe Massa.

The seven-time F1 champion has undergone two brain operations since the accident. The doctors treating him are keeping him in a medically induced coma and his body at an artificially low temperature to help healing.

The physicians have refused to give a prognosis for Schumacher, saying they are focused on his immediate care.

Schumacher, known affectionately as Schumi by his fans, is the most successful F1 driver in history, racking up a record 91 race wins in a career spanning more than two decades.

The German racer won five successive titles with Ferrari before retiring from the team at the end of 2006. He retired from the sport in 2012.

Schumacher's family thanked fans for their support late on Thursday. "We all know he is a fighter and will not give up," they posted on the racing car driver's website. – Sapa-AP, Reuters