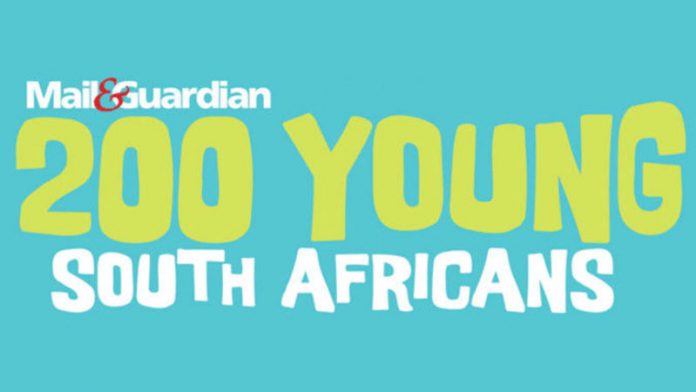 Our country is bursting with young talent in sports, politics, arts and more.

The Mail & Guardian's annual list of top 200 young South Africans has become the premier collection of the leaders of tomorrow – and in many cases, today.

Do you know any outstanding young individuals (35 years old and under) who you believe will play an important role in the future of South Africa?

This is your chance to nominate them as a candidate for the annual Mail & Guardian 200 Young South Africans.

Nomination and selection criteria
Nominees do not need to be South African citizens or born in South Africa. They do, however, need to be residing in and committed to this country.

All nominations will be considered and, should your nomination be successful, the research team will contact your nominee directly.

Nominations are now open and close on Thursday February 6 2014.

What's it all about?
If there is one thing that unites and separates Africa at present, it's a question of leadership. Whether presidential or municipal elections, our hopes are all the same – change and reform. The pessimist takes bets on whose electoral promises will fade faster than the ink on our thumbnails; the optimist wonders just how many crates of milk and honey to order; and somewhere in between we wonder if we actually have a say in our future by way of the future generation.

Our jaded eyes should start looking to Generation Z – that exceptional group of young, up-and-coming individuals whose age and ability find them fighting for their ideals instead of squabbling over tenders.

But if it takes a whole village to raise a child, you know it's going to take an entire country to raise our next generation of leaders. Which is where you come in.

A flagship of the M&G stable, this list has become the country's most celebrated hallmarks of the up-and-coming generation, a who's who of young people at the top of their field in 10 categories – arts and culture, business, civil society, environment, health, media, politics, science and education, sport and technology.

A list of this nature is only as good as the research and support behind it, which is why the M&G is once again calling for nominations to be sent in by the public to assist our editorial team, who will then make the final selection.