‘A matric pass means nothing’ 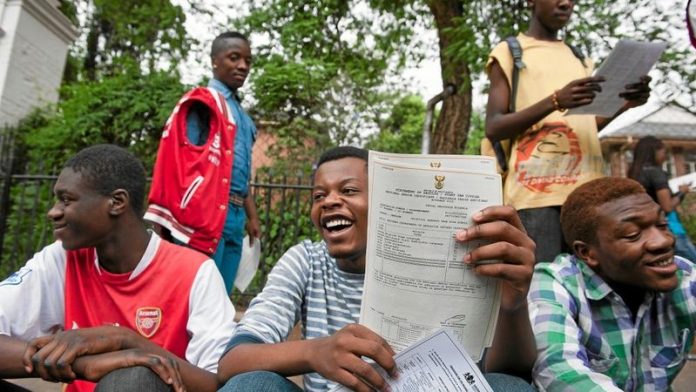 "What do you do with a matric pass? You do nothing," said Koketso Hlongwane, a 2013 matriculant from Alexandra High School in Johannesburg, this week.

Many of the pupils the Mail & Guardian spoke to when they received their results on Tuesday echoed her low regard for the matric certificate.

Their views mirrored several sceptical views from educationists, the business sector and union leaders about the dubious value of the matric certificate even before the pass rate of 78.2% was announced on Monday.

Hlongwane passed, but her marks are not high enough to make her eligible to study at university. She is not happy. "Our standard of education is too low. Thirty percent [as a passing mark]? It's nothing – 40% or 50% is something, at least," she said.

She will try to find a job or "maybe go to one of those [further education and training] colleges … but I wanted to go to university, not a college", she said.

Varsity pass
Almost 88% of her school's matric class passed. Many achieved university entrance passes. Hlongwane's classmate Anna-Marie Shabangu was one of them. She has been accepted to study political science at the University of Johannesburg.

"A matric pass means so little," she told the M&G, standing in her school's parking lot with the trash and traffic of the poverty-stricken Alexandra township just outside its walls.

"If you get just a pass, you will have to rewrite matric so you can try to get a university pass."

Boitumelo Kganyago, who matriculated at Allanridge Secondary School in the township of Kaalfontein, near Midrand, is one of those with "just a pass".

"I wouldn't get a good job now if I tried … so I'm going to rewrite matric next year and try to get a university entrance pass".

"Even 50% is too low, because if you try go to university you will see they want higher than that."

No value
The deputy vice-chancellor of the University of Johannesburg, Tinyiko Maluleke, was one of many who severely criticised the value of a South African matric the day before Basic Education Minister Angie Motshekga announced the country's highest matric pass rate to date.

The matric certificate is in "grave danger" of "meaninglessness, worthlessness and irrelevance", he wrote in the Sunday Independent.

The day after the glittering function at which Motshekga announced the results, the South African Chamber of Commerce and Industry's chief executive, Neren Rau, said the certificate "should be a fundamental signal to the labour market that a school-leaver can perform in at least a low-skilled position.

"Sadly, this is no longer the case, given a growing body of evidence of ill-equipped school-leavers as reported by the business community."

The M&G's visits to schools in Gauteng suggested at least some pupils share this scepticism.

But "the matric certificate is not enough any more", he said. "Companies want to see a degree."

And what about the 30% pass requirement? One of his classmates jogged past and shouted: "I think it's rubbish, personally!"

A degree means success
Yannick Ndjibu sat on the pavement outside his school – Barnato Park High School in Berea, Johannesburg – surrounded by friends poring over the lists of names and results in the newspapers laid out on the tar in front of them.

The group of about 10 all achieved university entrance.

"What do you know if you pass with subjects with only 30% or 40%?" Ndjibu said. "You can get that without even hardly studying."

A degree means success, said a friend on his left, Richard Lukalanga. On his right, Daniel Biyekele agreed: "Getting a degree is the best way into the professional world."

Nongovernmental organisation Ikamva Youth tutors pupils from grades 10 to matric from Ivory Park and Ebony Park townships outside Johannesburg. Its branch co-ordinator, Nyasha Mutasa, said pupils who get a non-university matric pass "are so disappointed".

"They see a matric certificate as not being able to get them good jobs or offer opportunity. A lot of them will be rewriting matric to try to get a university entrance pass," Mutasa said.

See "Matrics crisis of credibility", Page 20 and "Matric is failing SA's lost ­children", Page 32 Alexandra High School's class of 2013 check their matric results (top); Koketso Hlongwane (below left) and the Barnato Park matrics (below right) are unconvinced of the value of their certificates. Photos: Madelene Cronjé