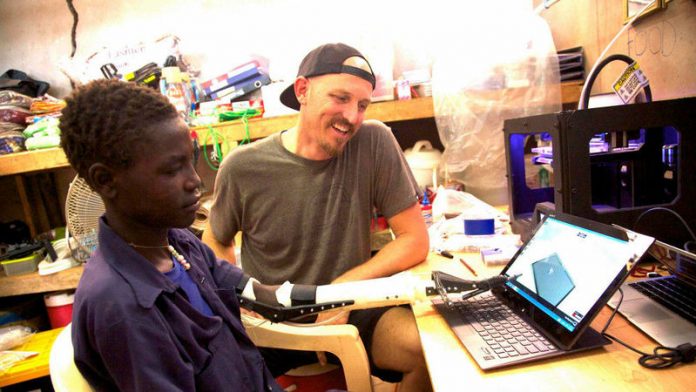 In 2010, Mick Ebeling, founder of a company called Not Impossible, spearheaded the creation of the Eyewriter, eye-tracking glasses using open-source software, to allow paralysed people to draw and communicate using only their eyes.

Then, in November last year, Not Impossible printed a prosthetic hand that allowed a teenager to feed himself for the first time in two years. But that was just the beginning.

In the past two days, Ebeling has stunned audiences at the International Consumer Electronics Show (CES) in Las Vegas with the story of Project Daniel.

Late last year, he set up the world's first 3D-printing prosthetic lab and training facility in Sudan's Nuba Mountains. The first "patient" was a boy called Daniel, who had had both his arms blown off at the age of 14.

The boy, now 16, was living in a 70 000-person refugee camp in Yida, South Sudan. On 11 November, he received the first version of a prosthetic left arm. It was named after the boy himself: the Daniel Hand. And it enabled him to feed himself for the first time in two years. According to Ebeling, he also ate chocolate for the first time.

With the assistance of an American doctor, Tom Catena, the team then set about teaching others to print and assemble 3D prostheses. By the time the Americans returned home, local trainees had printed and fitted another two arms, underlining the project's lasting benefit beyond the presence of the Not Impossible team.

Equally astonishingly, Project Daniel successfully unfolded in a region where fighting was escalating, and where the people taught to use the 3D printers had barely any knowledge of computers.

"We're hopeful that other children and adults in other regions of Africa, as well as other continents, will utilise the power of this new technology for similar beginnings," says Ebeling. "We believe Daniel's story will ignite a global campaign. The sharing of the prostheses' specifications, which Not Impossible will provide free and open source, will enable any person in need, anywhere on the planet, to use technology for its best purpose: restoring humanity."

Robohand
The Daniel Hand was originally designed at the Not Impossible headquarters in Venice, California (United States), using crowdsourcing to pull in "a dream team of innovators". Prominent among them was the South African inventor of the Robohand, Richard Van As, a master carpenter from Johannesburg.

The team also included an Australian neuroscientist and a 3D printing company owner. The project was supported by precision engineering company Precipart and by chipmaker Intel, which included Ebeling in its own events at CES this week.

"We are on the precipice of a can-do maker community that is reaching critical mass," says Elliot V Kotek, Not Impossible's content chief and co-founder. "There is no shortage of knowledge, and we are linking the brightest technical minds and creative problem-solvers around the globe. Project Daniel is just the tip of the proverbial iceberg."

While Project Daniel focuses on medical benefits of 3D printing, the project proves that the ultimate benefit the technology can bring is limited only by the human imagination. – Gadget.co.za

Robo-cases to roll travellers into the future