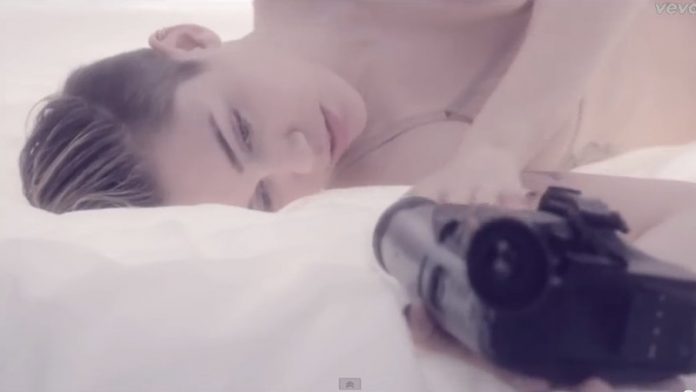 Heaven help us, Miley Cyrus has released another video.

Adore You sees the hipster starlet bathed in soft light, filming herself with a handheld camera. She writhes around in between sheets and in the bathtub, evoking imagery of being in the womb. Is that a thing now? Sexy womb imagery?

And then there is the fact that Cyrus seems hell-bent on convincing us that she has a pair of lips attached to her face.

Throughout the video, Cyrus touches her mouth – a lot. In fact, the entire thing is a series of stills of her pointing her pouter out. If you don’t believe us, here is carefully archived proof:

1. In this freeze-frame, she does your basic "it looks like I'm yawning but I'm actually just being sexy" hand-to-mouth gesture.

2. Then she moves to the baby-who-fell-asleep-in-the-bath-water position with a finger strategically placed between her lips. Also known as, "look, look how sexy I am with this finger that's almost in my mouth but not really."

3. And then, for the benefit of those who are seriously ignorant when it comes to anatomy (which, let's admit it, is basically no one), Miley moves in for the full-on grab.

4. Here, Miley let's us know that between her lips, exists her tongue. No, it was not lost in some freak disease she could have contracted during that hammer-licking session from Wrecking Ball.

5. One does wonder about whether said hammer-licking incident was 100% successful though, because she seems to have opted to lick her palm this time. Pre-adolescent kissing lesson, anyone?

7. Clearly we're just out to get her and exaggerating this whole obsessive lip thing. All she was doing was preparing to lick a stamp. See? No. More lip fixation then? Fine.

The track is not half bad – a breathy, sparse love song of adoration and admiration. If it wasn't for these obviously-made-to-grab-attention videos, Cyrus could actually be seen as a solid artist.

Ah, but that is not the nature of pop culture. And like that infamous twerking session with Robin Thicke at the MTV Video Music Awards, everything Cyrus does is a very carefully calculated "hot mess" meant to elevate her to levels of ultra-stardom not seen by the likes of Britney Spears or Madonna.

The next single off Bangerz might just be 4×4, a country-style stomper with the lyrics "driving so fast, about to piss on myself". Wonder what she'll do with that one.