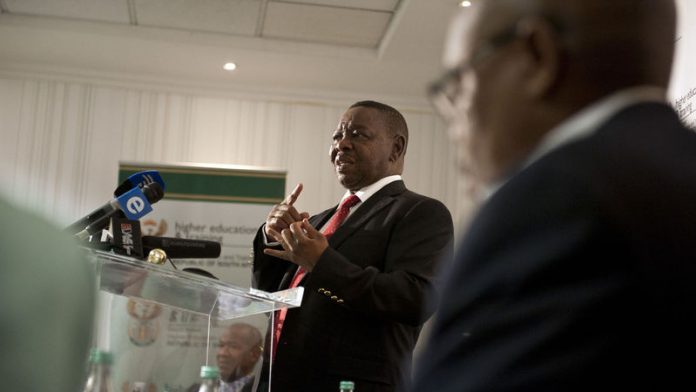 Minister of Higher Education and Training Blade Nzimande on Thursday defended the 30% pass requirement for three out of six subjects needed to pass matric, saying young people would miss out on post-school education opportunities if it was raised.

"What do we do with those who don’t get 50%?" he told a press briefing on post-school opportunities for learning in Pretoria.

"There is no dustbin where a human being goes."

He said South Africa was becoming a "dangerously elitist" country if it was considering "throwing away half of our young people" who did not achieve a 50% matric pass.

Nzimande said  the higher education system would take a matriculant who had passed matric but did not achieve a university entrance pass "to our further education and training colleges not because you are dom [dumb] but because that might be your inclination".

Education experts, teacher unions and business leaders strongly criticised the quality of the matric certificate before and after Basic Education Minister Angie Motshekga announced the 78.2% matric pass rate on Monday evening. They said it did not equip matriculants with skills to successfully enter the job market and universities.

DA 'offensive'
DA leader Helen Zille’s even questioned the credibility of the results and called for an independent audit of the matric results. Nzimande said this was "offensive".

There were 92  611 part-time pupils who wrote the exam. So far incomplete data the basic education department has released on their results suggest only 40% passed.

"This significant increase in successful candidates with predominantly bachelor and diploma entrance National Senior Certificates will have implications for the department in relation to enrolments within higher education institutions," Nzimande said.

What happens to the approximately 70 000 pupils who might find they cannot enter the post-school education system because there are not enough places for everyone?

"It is true … that is why we are driving so hard to expand and diversify the post-school system," Nzimande told the Mail & Guardian.

"But we are pushing to change this idea that you must go to university. Learners must know they can go to FET colleges."

Stampede
After a woman died in a stampede by walk-in applicants at the university of Johannesburg in 2012 Nzimande announced that a Central Application Clearing House (CACH) went live on Tuesday.

The CACH service is for pupils who "qualify for higher education studies but have not been accepted at an institution of their choice at the time the matric results were released".

Pupils looking for spaces at universities can contact CACH which will "verify the learners’ information and forward it to institutions that still have unfilled places".