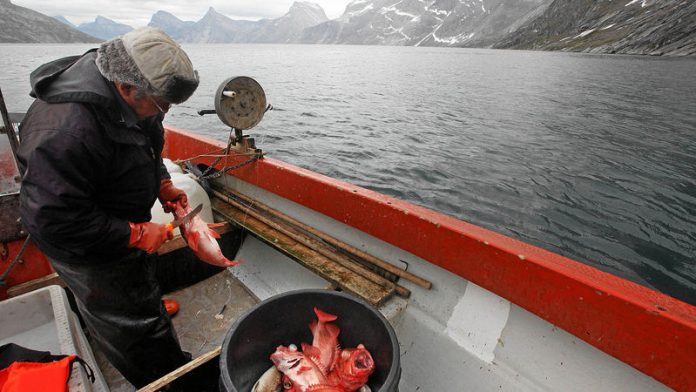 London Mining, a British mineral company, is trying to attract Chinese and other international investors to build a £1.5-billion iron ore mine just outside the Arctic Circle in Greenland.

The move comes as BP and Shell were among those recently given four exploration blocks in the unsullied waters off the Greenland Sea, amid heightened concern that the wave of industrialisation will damage the pristine environment.

Opposition to BP's successful bid for the project is particularly vocal in light of the 2010 oil spill in the Gulf of Mexico.

Greenland and the wider Arctic is seen as one of the new frontiers for exploiting mineral wealth, but uncertain national boundaries have also opened up potential political, if not military, conflicts.

Canada alarmed other Arctic states before Christmas by suddenly announcing it planned to lay claim to the north pole. The move was quickly followed by Vladimir Putin promising to step up Russia's military presence in the region.

Canada and Norway have already taken steps to increase defence spending in the far north.

London Mining opens talks with Sichuan Xinye
London Mining, whose board includes a former British foreign minister in Sir Nicholas Bonsor, has already opened talks with Chinese mining group Sichuan Xinye and others about helping to finance a new mine at Isua.

The project has received government approval and could see an influx of more than 3 000 construction workers into the country, which has a population of only 57 000, to build a port and pipeline to serve the mine.

Currently there is no mining of any kind in Greenland, but the cash-strapped and semi-autonomous country is keen to break away from financial and political dependence on its historical owner, Denmark.

In October a newly installed government in Nuuk led by Prime Minister Aleqa Hammond gave the go-ahead to the Isua scheme and a separate one at Kvanefjeld, and lifted a decades-long prohibition on the mining of uranium and rare earth minerals.

The vote in Parliament scraped through by only 15 votes to 14 amid widespread concern about the environmental and social impact of major mining schemes, particularly those involving radioactive materials such as uranium.

A social impact report undertaken by London Mining, which is backed by some of Britain's biggest pension schemes such as Standard Life and F&C Asset Management, accepted there would be some detrimental effects from its scheme.

Last March, the government of Kuupik Kleist fell in an election campaign dominated by an acrimonious debate over whether new industries such as mining and oil would damage the traditional Inuit trades of fishing and hunting.

In particular, there was criticism that the Isua scheme could lead to thousands of Chinese arriving in Greenland with a wider agenda of controlling an area of vast potential mineral wealth to feed their own country's industrialisation.

London Mining has been keen to dampen this speculation, and the new government has insisted all staffing plans will be discussed with local trade unions.

The Kvanefjeld scheme has been proposed by Australian company Greenland Minerals and Energy with the intention of producing uranium for a new generation of nuclear power stations in China and elsewhere.

The company also intends to mine rare earth minerals used in high-tech weaponry and mobile phones.

Protesters from Greenpeace re-arrested
Meanwhile, major oil firms including BP, Shell, Statoil and ConocoPhillips have been awarded licences to join those handed out to ExxonMobil and Cairn Energy. The offshore drilling undertaken by Cairn in 2011 put it into direct physical contact with environmental campaigners from Greenpeace who want drilling to stop.

The 30 protesters from Greenpeace who were jailed in Russia and released before Christmas had been arrested for trying to disrupt similar operations in the Barents Sea.

But wider concerns surround the uncertain national boundaries with Canada and Russia, which are among those keen to press territorial claims through a process handled under the United Nations Convention on the Law of the Sea.

Greenpeace said it beggared belief that a company with BP's blemished track record would be allowed to work in one of the world's most fragile environments.

The British oil company confirmed earlier this month that it had won a licence to work on the Amaroq concession off the coast of northeast Greenland — its first permit in or around that country.

BP has won permission to drill in the clear waters off Greenland, just three and a half years after abandoning similar plans to apply for a licence in the aftermath of the Deepwater Horizon blow-out.

"BP and our partners ENI and Dong Energy are pleased to have been awarded block eight in the northeast Greenland licence round, an area amounting to 2 630km2," said BP in a statement.

"Northeast Greenland is a long-term play, and we expect several years of careful planning before exploring this challenging and interesting region. We look forward to working with the BMP [Greenland's bureau of mines and petroleum] and partners to develop a 2D seismic work programme," it added.

BP applied for the licence as operator but has subsequently decided to hand that role over to ENI, in an unusual move that it would only say was "mutually agreed" between the consortium partners and the government.

Jens-Erik Kirkegaard, the minister for industry and mineral resources, insisted that safety would be paramount.

"All exploration for oil and gas is conducted by following the highest achievable standards when it comes to protecting the marine environment and living resources in the sea," he added. But John Sauven, the executive director of Greenpeace, lambasted the move.

He said the British oil group had "polluted miles of the Louisiana coastline and destroyed the livelihoods of thousands with the Deepwater Horizon catastrophe" and was now "sniffing around the Arctic, one of the world's most fragile environmental regions".

He added: "BP and its shareholders should realise the enormous risks of any move into the Arctic and the opposition they will face from the millions of people, locally and globally, who have signed up to protect the region."

BP abandoned plans for drilling off Greenland in the summer of 2010, in a move that was widely believed to have come after pressure from the government in Nuuk arising from worries about the public relations impact as much as the safety record of BP following the fire and pollution at the Macondo well in the Gulf of Mexico.

BP is also now a 20% equity holder in Rosneft, which has substantial licences in the Russian Arctic.

Since the Deepwater disaster, BP has not been awarded any new licences by the United States ­government, but has won stakes in drilling rights in the Barents Sea off Norway.

Shell had been pioneering a new round of drilling in Arctic waters off Alaska but ran into conflict with the safety authorities after its drilling rig, Kulluk, ran aground.

The French oil group Total has argued that energy companies should stay away from the Arctic because an oil spill would risk doing so much damage to the environment. — © Guardian News & Media