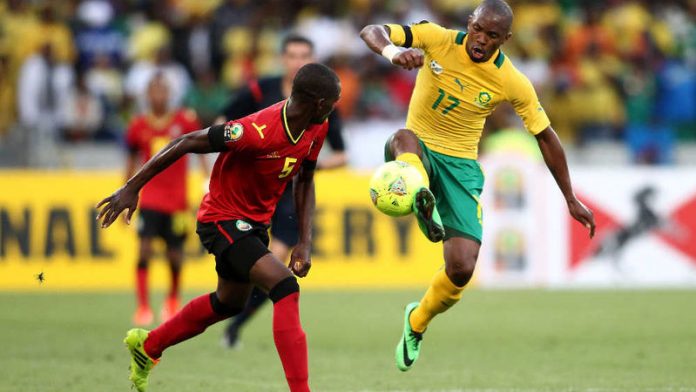 Two-goal hero Bernard Parker said that Gordon Igesund was influential in guiding Bafana Bafana to a solid 3-1 victory over Mozambique in the opening game of the African Nations Championship in Cape Town on Saturday evening.

Parker netted twice, while Hlompho Kekana scored a spectacular goal to seal all three points for the host nation, but it was only after the former Manning Rangers, Mamelodi Sundowns and Moroka Swallows boss had his say at half-time, that South Africa turned the result around.

"The way we started off, I think we took our opponents a little bit lightly and they punished us because we were too open, we lost our shape and there was just an unfortunate goal," Parker said of the national team's first half performance.

"We were not fully focused and the coach gave us a motivational, hard talk at half-time and we came out more focused and more tactically disciplined.

"Once we got the equaliser, Mozambique started opening up and then we got the other two goals."

Parker, who scored his 20th and 21st international goals, added that the home side worked themselves into excellent positions in attack, which would lay the foundations going forward in the group. "We're very offensive. We're looking good on the ball. Everyone wants to be on the ball, that's a good sign.

"Our movement has been good and as the tournament goes on, I think we are definitely getting better and I'm sure there will be more victories down the line.

"We're getting there. We started slowly and after that we got into good situations where we started to gel well, so I think this is a good start for us."

Threat
Shifting his attention to their next assignment against Mali on Wednesday, Parker said the West Africans would pose a threat on the physical side, but was confident the South Africans would be able to handle whatever the visiting side threw their way. "Going into the Mali game, we've seen the 'fellas', they're all big guys, they've got strong men.

"I'm sure we'll watch their game and we'll see how they play, and when the coach does his presentation, I'm sure we'll be ready when we face them.

"I'm definitely sure, in future, we will definitely be better than today."

Kekana, meanwhile, preferred the spotlight to fall on the team, rather than his magical second half stunner from more than 30 yards out. "I'm happy that we're applying ourselves like we should," Kekana said.

"We just have to go there and apply ourselves like we did today. I think we've got a massive chance [against Mali]."

Kekana also revealed that well-known South African entrepreneur, Patrice Motsepe, owner of the midfielder's club side Mamelodi Sundowns, paid a visit to the Bafana change-room after the game to congratulate Kekana on his goal.

"He came to congratulate me and I'm happy with that … the support of the big man," Kekana said with a smile. – Sapa