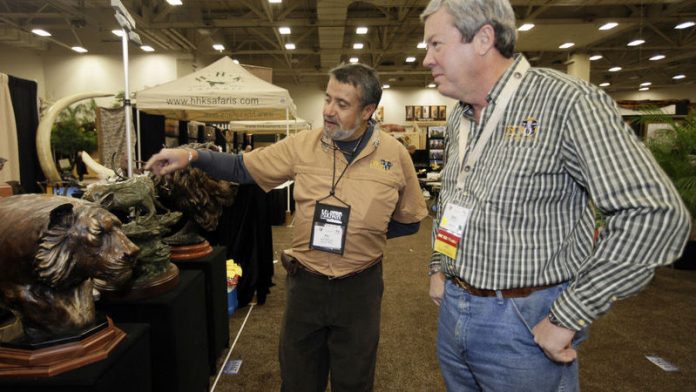 A permit to hunt an endangered African black rhino sold on Saturday night for $350 000 at a Dallas auction, which was held to raise money for conservation efforts but criticised by wildlife advocates.

Steve Wagner, a spokesperson for the Dallas Safari Club, which sponsored the closed-door event, confirmed the sale of the permit for a hunt in Namibia. He declined to name the buyer.

Ben Carter, executive director of the Safari Club, has defended the auction. He said all money raised would go toward protecting the species. He also said the rhino that the winner would be allowed to hunt was old, male and nonbreeding – and that the animal was likely to be targeted for removal anyway because it was becoming aggressive and threatening other wildlife.

But the auction drew howls from critics, including wildlife and animal rights groups, and the FBI earlier this week said it was investigating death threats against members of the club. Officials from the Humane Society and the International Fund for Animal Welfare said that while culling can be appropriate in abundant animal populations, all black rhinos should be protected, given their endangered status.

'Making a spectacle'
Critics have also said any hunting of a rhino sends a bad message to the public.

"This auction is telling the world that an American will pay anything to kill their species," Jeffrey Flocken, North American regional director of the Massachusetts-based IFAW, said earlier this week. "This is, in fact, making a spectacle of killing an endangered species."

The auction took place Saturday night in downtown Dallas under tight security and behind closed doors. Organisers hoped to at least break the previous high bid for one of the permits in Namibia, which is $223 000, and said the amount could be as high as $1-million. The nation offers five permits each year, and the one auctioned on Saturday was the first to be made available for purchase outside of Namibia.

The winning bidder could have come from anywhere in the world, and at least some bidders were expected to enter by phone.

About 40 protesters gathered early on Saturday evening outside the convention centre where the auction and a pre-auction dinner were to take place. They held signs and chanted. Most dispersed by just after 6pm.

Jim and Lauren Ries travelled with their children from Atlanta to protest against the auction of the rare black rhino hunting permit in Dallas. Jim Ries said it was his son Carter (12) and daughter Olivia (11) who pushed for them to go and participate.

"We heard what the Dallas Safari Club was doing and we thought it was just wrong that they were auctioning off to kill a black rhino and we really got upset that they were thinking this," Carter Ries said.

Passionate conservationists
Jim Ries said his children are passionate about animal conservation and were working to help adopt cheetahs in Africa. The family started a nonprofit called One More Generation, dedicated to saving endangered species.

"There are less than 5 000 black rhinos left on the planet," the father said, "and if our kids ever want to see a rhino left in the wild, we can't be pulling the trigger on every one we say is too old to breed."

Poachers long have targeted all species of rhino, primarily for its horn, which is valuable on the international black market. Made of the protein keratin, the chief component in fingernails and hooves, the horn has been used in carvings and for medicinal purposes, mostly in Asia. The near-extinction of the species also has been attributed to habitat loss. – Sapa-AP