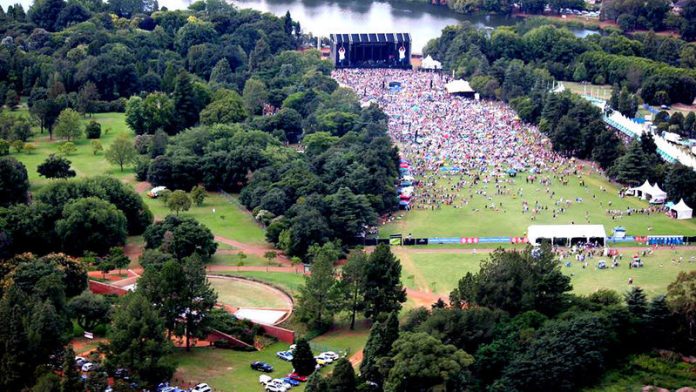 Bastille enjoyed a packed field of 15 000 smiling and eager fans on Saturday when they played at Emmarentia Dam to end off their South African tour. Lead singer Dan Smith mentioned that it was the band's biggest headline gig to date.

The UK indie-rock group was supported by singer Matthew Mole, the jazz-influenced Beatenberg and die-hard rockers Bed on Bricks. Fans waited in anticipation for one of those famous Jo'burg passing rain showers to subside before the band came on and entertained with hits like Things We Lost in the Fire, Pompeii and Flaws.

Here are some of the Instagrams shared on the day:

1. Concertgoers are seen relaxing beneath the dark, threatening clouds.

2. The long wait: Bastille ended their set with Pompei, supported on stage by Bed on Bricks.

3. Instagram user @emeales_x shared this picture of the crowd.

5. An energised crowd gets their hands in the air for Bastille's cover of the club classic Rythm is a Dancer.

6. Bed on Bricks pose with the South African flag toward the end of the show. Bastille's Smith's parents are from South Africa.

7. The crowd used umbrellas and makeshift canopies as shield from the rain just before the band played their set.

Taking place after the musician had gone back to the United States and after a short sojourn to Liberia, the Live in Lesotho concerts are a musical and thematic pivot towards home.
Read more
Thought Leader

Can a Tiger Tiger change its racist stripes?

Think you can escape white privilege and racism with a night out with friends? Think again, says Ra'eesa Pather.
Read more
Friday

Zoo Lake is set to come alive when a collaboration of music and storytelling between artists from Austria, France and Zimbabwe take to the Moyo stage.
Read more
Videos

SA's hip-hop and kwaito stars, including a hologram of the late Brenda Fassie, celebrated the country's musical history at the Hansa Festival of Legends.
Read more
Friday

Boo! not such a drag

"When I was younger I didn't care about people's feelings. But I care now" says Boo! lead singer <strong>Chris Chameleon</strong>
Read more
Advertising
Continue to the category
National