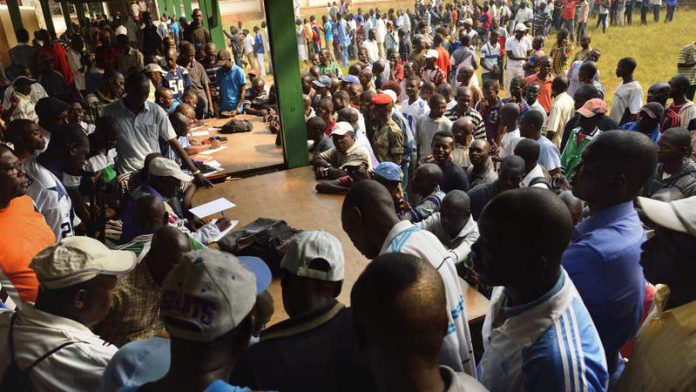 Central African Republic's new interim leader ordered the deployment of hundreds more troops in the capital Bangui on Monday with instructions to shoot troublemakers "at point blank range" in a bid to end months of religious violence.

Fighting, attacks on mosques and the looting of Muslim-owned shops have persisted in Bangui since the resignation of rebel leader-turned-president Michel Djotodia last Friday under intense international pressure.

Djotodia seized power last March at the head of the Muslim Seleka rebel coalition, unleashing a wave of killings and looting targeting the majority Christian population which in turn sparked revenge attacks by "anti-balaka" Christian militia.

A Red Cross official said its workers had collected 39 bodies from the streets of Bangui since Friday. Sporadic violence has continued despite the presence of 1 600 French troops and 4 000 African Union peacekeepers.

Alexandre-Ferdinand Nguendet, the head of the National Transitional Council (CNT) who has taken over the presidency until a new leader is chosen this month, said he was deploying 400 additional troops to the streets of Bangui.

"The party is over. The robberies are over. The chaos is over. The Central African people must regain their honour," Nguendet told lines of hundreds of military officers, some of them wearing civilian clothes, at the Ligoupou camp.

"If they continue, I order you in the name of the republic to shoot at point blank range so that order can reign in this country," he said.

He said the police and gendarmerie would be deployed around the city to start disarmament of Seleka fighters and the "anti-balaka" militia during the next 72 hours. Nguendet also said he was launching a 24-hour rapid reaction team with an emergency hotline for residents to report violence.

In the chaos after thousands of Seleka fighters swept from the north, many soldiers abandoned their posts and drifted into the civilian community as rebels took control of security operations. Some joined the 'anti-balaka' militia.

Waiting for weapons
Nguendet said any military officer who failed now to report for duty would be considered a deserter. Dozens of army officers turned up to register for service at the School of Administration and Magistrature (ENAM).

"We … have gathered here at the transitional president's request," said Patrick Kangou, a sergeant, still wearing civilian clothes. "We are just waiting for the decision of the chief of staff to give us our weapons and then we will deploy."

The United Nations estimates that months of fighting in the landlocked former French colony has displaced around one million people, or just over a fifth of the population. The national death toll is difficult to estimate.

More than 1 000 people were killed in Bangui alone last month, while the Red Cross official said on Monday that 97 people had been killed just in the northwestern town of Bozoum since early December.

Under a transitional charter, Nguendet will lead the Central African Republic for a maximum of two weeks until the CNT chooses an interim president to steer the country to post-coup elections, due before the end of this year.

Djotodia resigned at a regional summit in Chad last Friday after it became clear that France and Central African nations, which provide the backbone of the African Union peacekeeping mission, had lost faith in him. He has gone into exile in Benin.

"There are 10 days left to find a new president. We have to move quickly," French Foreign Minister Laurent Fabius told BFM television. "You cannot leave a country without a leader."

Traffic in central Bangui returned to normal, shops reopened and people went about their business on Monday. However, there were isolated reports of unrest, particularly in residential neighbourhoods towards the north of the city.

There was a standoff outside state radio's headquarters where Seleka fighters guarding the building refused to hand their weapons to French forces. They were soon disarmed and escorted away by the French troops.

At the weekend, Nguendet visited a camp at Bangui airport – home to an estimated 100 000 people displaced by the fighting – to assure inhabitants it was now safe to return to their homes.

Aid groups have warned of a possible humanitarian disaster in Bangui, where an estimated 500 000 people are in camps without sufficient running water and sanitation. – Reuters