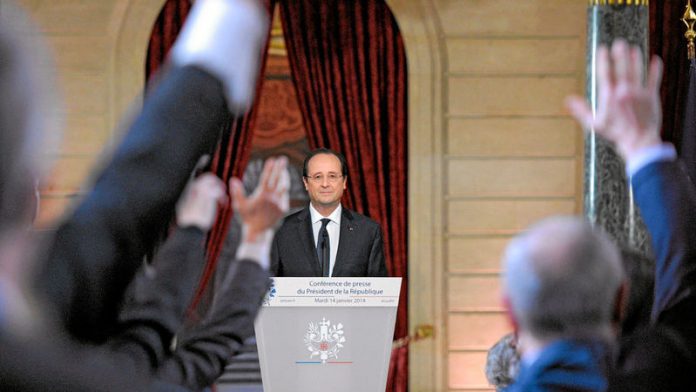 François Hollande faced the French and international press this week and staunchly refused to answer any questions about his private life.

The French president opened his press conference on Tuesday with a long discourse about his plans for the rest of his term in office.

He spoke about his "responsibility pact" to reduce charges for businesses and cut red tape in exchange for promises that they will employ more staff. He spoke about cutting public spending by €15-billion this year and a further €50-billion by 2017.

He spoke about more jobs for youngsters and teachers, about an end to the "excess and abuse" in the health system and about anti-Semitism, racism and xenophobia, which he said "will not be tolerated".

Hollande talked about assisted suicide for "every adult suffering unendurable pain"; he rattled on about Europe and pledged that it was the "future of France" and that "France is the future of Europe". He said he wouldn't let Eurosceptics, "even governments", destroy what had been achieved.

Affair scandal
But Hollande (59) refused to say a word about the scandal sweeping France about his alleged relationship with a 41-year-old actress. The first question he was asked after his long and detailed address was whether Valerie Trierweiler was still first lady, after claims by Closer magazine that he had been enjoying secret trysts with an actress, Julie Gayet, at an apartment a stone's throw from the Élysée Palace. The question drew breaths in the opulent Salle des Fêtes at the Élysée, packed with 500 journalists under the crystal chandeliers.

"I understand your question and you will understand my response. Everyone goes through difficult, painful periods in their lives and that is our case," Hollande said.

He added that "private matters must be resolved in private" and would not answer any questions on the affair, but promised to "clarify the situation" before flying to the United States in February to meet President Barack Obama. Hollande said he would not seek to tighten France's already strict privacy laws.

"I'm protected, but my indignation is total. Total," he said, his voice rising. "It's not just personal; it touches all of you. It touches a fundamental freedom: the respect for private life and dignity. France is a country of great freedom, but we need to have respect for private lives and for dignity." Then it was back to tax cuts, the economy and jobs.

Hollande was repeating a message he had first voiced in 2012 shortly after his election. "I am for a clear distinction between public and private life," Hollande said in a television interview a few weeks after he took office.

Jealous tweet
The honeymoon did not last long. A few weeks later during the legislative elections, Hollande's partner, Paris Match journalist Trierweiler (48), made a disastrous call. In what was said to be a fit of jealousy, she tweeted in favour of the political rival of Hollande's former partner and mother of his four children, Ségolène Royal, then standing for election. The ill-advised tweet caused a storm in France, where it was nicknamed "tweetgate".

The president and his children were said to be furious. The public never forgave her. "She was jealous of the past, but she'd have done better being jealous of the future," political commentator Catherine Nay said this week. French media reported that certain officials at the Élysée are furious with Trierweiler – believing that, terrified Hollande is about to leave her, she is engaging in "emotional blackmail".

"She's not the sort to react to such a thing discreetly," one told Le Parisien. The comment that she is not about to walk out and "slam the door" on their relationship and is "prepared to forgive" Hollande suggests a certain amount of face-saving after a very public humiliation.

The revelation that her partner had been sneaking out of the Élysée to make the 165m journey to a flat in a nearby street for secret trysts with Gayet hit Trierweiler like "a [high-speed train] hitting the buffers".

As her friends told journalists she was taking a few days to reflect on their relationship, sympathy was in short supply for her. François Rebsamen, head of the Socialist group in the upper house, said: "There's a more important consideration that the president of the republic should have and that is over the role and position of the person with whom he lives. There is no first lady in France. This practice is outdated, outmoded and must be banned. It would be a step forward for democracy."

"François Hollande himself said it at one point: you elect a person. And then this person can live alone, can be single, can live with another man or a woman. It's nobody's business and it doesn't come into play." – © Guardian News & Media 2014