The battle of Majuba goes underground 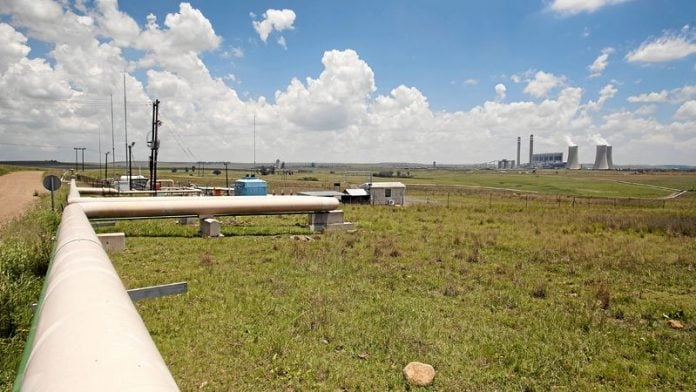 Coal trucks are a common sight on the green-flanked roads to the Majuba power station in Mpumalanga. They are either hauling 42 000 tonnes of coal daily to feed the station's insatiable appetite, or returning to Delmas or Witbank to reload and return.

Coal-fired power stations are usually built next to coalfields because they consume so much coal. But the Majuba power station had already been built when it was discovered that the surrounding underground coal seams had split, making most of the coal inaccessible.

The failure of the colliery adjacent to the 4 110 megawatt coal-fired power station has made it the perfect test site for underground coal gasification (UCG), an experimental technology in which the coal is burnt hundreds of metres underground.

At least two wells are dug into the coal seam, which are encased in steel. The coal is ignited and oxygen pumped into one of the wells. When the coal burns, it releases a synthetic gas – which mainly includes carbon monoxide, hydrogen, methane and carbon dioxide – which escapes via the other well.

Proponents say it is a cleaner way of burning coal, will cut out several steps in electricity production and is a way to avoid sending people underground to mine, but intellectual property rights mean that technical information is scarce and regulations do not include this unconventional technology.

"There's a vast resource of coal in that coal field but there's no way to get it out using man and machinery," says Mark van der Riet, a corporate specialist in Eskom's research, technology and development division.

Conventional coal mining
Eskom's first UCG pilot scheme, which was at the former Majuba colliery next to the power station, had a price tag of R1-billion and the project is now seeking another R1-billion over five years.

Unmineable coal is not the only a problem at Majuba, it appears to be a global concern. The International Energy Agency's (IEA) clean coal division distinguishes between proved reserves, which are "the amount of coal which would be economically recoverable using current technology", and the total amount of coal in the ground. In 2007, the World Energy Council estimated that UCG could potentially increase the world's coal reserves by as much as 70%.

Most of the world's coal reserves are deep underground where it is not safe for people to mine, or the coal seams are too thin, making it uneconomical to drop a mine shaft to recover the coal.

According to the department of energy, South Africa has another 50 years of coal supply, based on proved reserves, which the World Energy Coun­cil put at about 30-billion tonnes at the end of 2008. In its discussion document, Eskom estimates that "there is an additional 45-billion tonnes of previously unmineable coal suitable for UCG in South Africa" because about three quarters of the country's coal is not mineable.

For the first pilot project, the area was between only one and two hectares. Above it, the veld is green and lush, thanks to the summer rains, and there is no trace that, between 2007 and 2011, fires were burning deep underground.

In conventional coal mining, which is either open cast or below ground, a coal-seam fire is a catastrophe. Centralia, in Pennsylvania in the United States, is now a ghost town after a fire began in an underground coal mine making the area unsafe, prone to sinkholes and spontaneous combustion; and, closer to home, there are parts of Witbank where derelict mines have been burning for decades.

'Not yet a proven technology'
But the Majuba UCG project is different from an uncontrolled fire in an underground mine, Van der Riet says. "In Witbank, that coal seam is 20m below ground and there are areas where there is spontaneous combustion."

To have a fire, you need a fuel, air, heat and a chain reaction (which sustains the fire). "We're looking to apply this [UCG] technology with deep coal. At Majuba, the coal is about 300m underground, so there is fuel, but no chain reaction, heat or oxygen.

"Theoretically, it's very, very simple. Practically, there are not many people who have made it work on a large scale," Van der Riet says.

John Kessels, a researcher at the IEA's clean coal unit, says that South Africa's pilot project is one of the most advanced in the world, although there are others being undertaken in Australia, New Zealand and the United States, amongst others. UCG technology was also used in the former Soviet Union but, according to the IEA's report, "there are both reporting and translation limitations" so it is not possible to determine how successful the projects were.

According to a review of UCG technologies, published in the International Journal of Energy and Engineering in 2012, "typically, coal reserves lie too deep underground or are otherwise too costly to exploit using conventional mining methods. Conventional mining also has other issues, including land subsistence, high machinery costs, hazardous work environments, coal transportation requirements, localised flooding and methane build-up in cellars of nearby homes."

Asked why UCG is not mainstream, Kessels says: "It is not yet a proven technology and there are still economically accessible coal resources available that are more economical to use."

Limited access
Access to this technology is also limited and it is safeguarded by intellectual property laws and licensing agreements.

Lou Duvenhage, the Majuba UCG site manager, who is based at Eskom's pilot site near Amersfoort in Mpumalanga, says that Eskom has piloted and adapted technology licensed by Ergo Exergy, a Canadian company.

"The first pilot was producing 15 ?000m3 of gas per hour," he says, adding that the second pilot project aims to ramp up production to 75 ?000m3 an hour, and using this to co-power Majuba.

However, the UCG field is competitive and information is scarce. In the IEA's report, it says: "Publications about the results from current pilot projects are sketchy and are limited by the fact that developers regard some of the knowledge as proprietary."

"People don't want to give their recipe away," says Duvenhage.

Mining company Exxaro has also licensed technology, from Australia's Linc Energy, to explore UCG, although it has yet to decide on a coal field to test the technology.

"The pilot facility will be a proof of concept," says Mzila Mthenjane, executive head for strategy and corporate affairs at Exxaro. "The commercial facility will be erected with the purpose of generating electricity. Any other products such as liquid fuels and chemicals would be considered as a second phase."

Regulation remains
But the question of regulation remains. Duvenhage says: "UCG is a new technology for South Africa and the world and there are no text books and few reference plants still running. This makes it difficult to regulate."

Mthenjane defers to Eskom, saying the parastatal has "set the precedent for future UCG projects".

Duvenhage shows me the site for the second pilot project where the heat is baking the swollen summer grass – the only activity on the site as Eskom waits for permits from the departments of water affairs and environmental affairs.

"If we can prove this technology in this area then other coal fields will be easier as this is the most geologically difficult coalfield in the country."