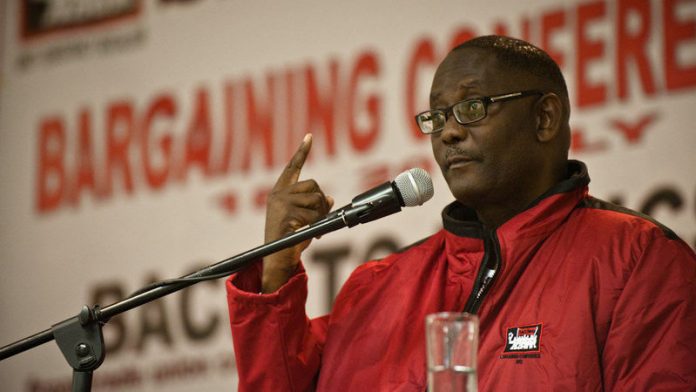 "Like the continuous selective leaks of details of the forensic probes against him during the five months of his illegal suspension, we believe the purpose of this week's latest leaks is to subject Mr Vavi to a media trial with the hope that some, if not all, of the trumped up charges against him will stick like mud," Dludlu said in a statement. "This is unfair, and in our view represents a further assault on the rights of Mr Vavi."

Dludlu said Vavi hoped the country would see through the "malicious agenda", adding that the suspended general secretary was confident of his innocence and would be vindicated.

"The basic rule at all times is that the onus and the burden of proof lies with the one making allegations. Mr Vavi is no different – he remains innocent until proven guilty."

'Media trial'
​Vavi on Saturday morning hit back at his enemies within the federation, saying the charges against him were leaked to the media to "conduct a media trial" and dent his reputation. He also said he would not "fall in a trap of answering [trumped up] charges on social media", demanding that evidence be brought forward "in a correct forum".

Leaking charges is gross violation of my rights! It's an attempt to conduct media trial hoping trump up allegations will dent my reputation

I knew their handful supporters will then jump in to conduct media trial – what this have to do with respect for alliance leaders?"@Za

On Friday, the Mail & Guardian reported that the leadership of the country's biggest labour federation wants its suspended general secretary fired from his position without any notice.

While it has been clear that Vavi's star at Cosatu was rapidly waning, the charge sheet presented to him this week confirmed that the federation wants him out.

Cosatu finally charged Vavi this week, almost five months after it suspended him on August 15 last year, for having an affair with a junior Cosatu employee.

Vavi's penchant for taking to Twitter about his strife with Cosatu might have come back to bite him. A number of Vavi's Twitter followers had over the months advised him to be discreet and not to air so much of his views on the social media platform, but he had repeatedly ignored them.

Thirteen of his tweets between September and December 2013 have been cited in the charge sheet as evidence of derogatory statements undermining the federation, its leadership and its policies.

On the charge of using a Cosatu credit card for personal expenses and personal travel, Vavi is accused of insisting between March and July 2012, that his and his family's travel expenses be paid for by Cosatu.

He also allegedly used the federation's credit card for a massage at a Johannesburg hotel.

"At your insistence a charge for services rendered to you by a body therapist at the Parktonian Protea Hotel on May 23 2013 was paid by Cosatu in the amount of R1 500," it reads.

"A ticket for Noluthando Vavi [your wife] flying from Johannesburg to Cape Town on March 28 2012 in the net amount of R7 180 for the Jazz Festival, which amount was paid with a Cosatu credit card.

"Accommodation at the Nova Constantia Boutique Hotel for the Jazz Festival during the period March 28 2012 to April 1 2012 in the net amount of R14 128 for you and Noluthando Vavi."

"The expenses reflected in the above paragraphs were not refunded by you." Cosatu claims the expenses were incurred without the knowledge or authorisation of the deputy general secretary or the national office bearers of Cosatu. "… [W]ere incurred at a time when to your knowledge the NOBs had decided in the context of Cosatu's serious cash flow problems, that no personal expenses would be incurred by Cosatu on behalf of its national office bearers."

Cosatu alleged that the expenses were incurred and processed on Vavi's behalf by the woman he allegedly had an extra-marital relationship with.

Serious misconduct
In the charge sheet, Cosatu states that in respect of each of the charges, Vavi is guilty of serious misconduct because he intentionally, or alternatively recklessly or negligently acted in breach of his general duties and responsibilities as an employee of the federation and as its general secretary as set out in Cosatu's constitution and policies.

At the disciplinary hearing, the date of which will still be determined, the federation will submit that Vavi is guilty as charged and "having regard to the gravity of the charges" but subject to the findings of the chairperson of the hearing, Cosatu will move for his summary dismissal.

The disciplinary inquiry will be chaired by one of the country's top legal minds, advocate Wim Trengove SC, who will be authorised to make findings on all the charges put to Vavi and also decide on the appropriate sanction.

The federation said the decision to appoint an external chairperson and to permit legal representation at the inquiry was taken by Cosatu in the light of the fact that Vavi occupies a very senior position within the labour federation and because "it is manifestly desirable that the charges should be heard before and determined by an independent person".

"Please be advised that Cosatu considers the charges against you to be grave and destructive of the working relationship between it and yourself.

"Subject of course to the findings of the chairperson [Trengove] it is the intention of Cosatu to move for your summary dismissal in the event of a finding of guilt in respect of one or more of them," reads the charge sheet.

Vavi will be allowed legal representation at the inquiry. – Additional reporting by Andisiwe Makinana

In the first weeks of the lockdown, workers reported that they had been left with nothing to survive on as their employers failed to apply to the UIF
Read more
Business