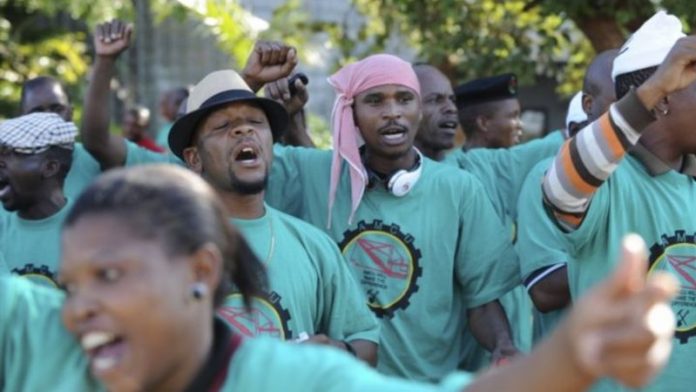 A strike over pay by at least 70 000 workers in South Africa at the world's biggest platinum mines started on Thursday's early shift.

Mineworkers slowly converged at the Wonderkop Stadium in Marikana ahead of a strike on the platinum mines in the North West by the Association of Mineworkers and Construction Union (Amcu).

A small group in the stadium were dancing and singing about President Jacob Zuma and ANC secretary general Gwede Mantashe.

"Hey wena, Zuma, Mantashe stop being an idiot," they sang.

Members of Amcu at Lonmin in Marikana, Anglo American Platinum (Amplats) and Impala mines (Implats) were pushing for an entry-level monthly salary of R12 500. According to Amcu treasurer Jimmy Gama earlier on Thursday, members of the union did not clock into work.

"People haven't reported for work" and some miners who want to report for duty are getting stopped by those taking part in the strike, Johan Theron, a spokesperson for Implats, the second-largest producer of the metal, said.

On Tuesday, the companies said Amcu's wage demands were unaffordable and unrealistic.

Impala Platinum cancelled its Wednesday night shift at its Rustenburg operations and would continue to do so for the duration of Amcu's planned strike, the company said.

This was to mitigate the risk of violence and to ensure the safety of their employees.

'Respect authority and the rule'
Earlier, North West police said Amcu leaders must ensure that their protest does not become violent.

"Police will be deployed to ensure peace and security but the strike remains a labour matter and the South African Police Service would like to urge all … striking miners to respect authority and the rule of law."

He said mine management had a duty to ensure adequate security within the confines of their property for those on duty.

Forty-four people were killed during a violent strike at Lonmin's Marikana operations in August 2012.

Thirty-four were killed on August 16 2012 when the police fired at them. Another 10 people, including two policemen and two security guards, were killed in the preceding week.

Gold-mine strike delay
Amcu’s plan to start a strike at South African gold mines on Thursday was delayed after the Johannesburg Labour Court postponed its ruling on whether the stoppage would be protected to January 30. – Sapa; Bloomberg