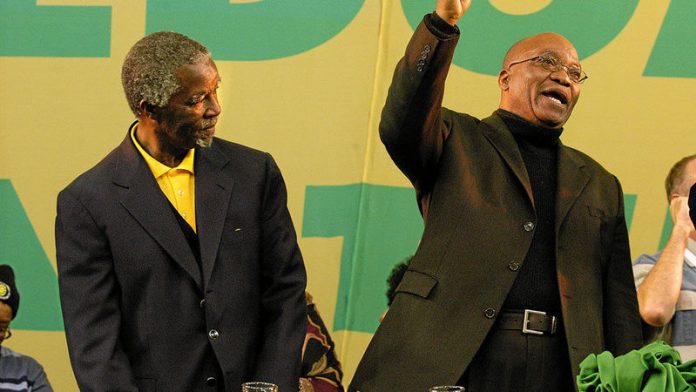 Critics want to divide the ANC

The incessant, carefully crafted attacks on President Jacob Zuma, which in most cases are baseless, are not merely directed at Zuma as an individual but are meant to sow divisions within the ANC in the main.

Zuma's critics pretend to admire the leadership styles of former presidents Thabo Mbeki and the late Nelson Mandela, but we know very well that their real wish is to see the destruction of the ANC as an organisation, since they know that the very ideology in which both Mandela and Mbeki were groomed is the same one that groomed Zuma.

By singling out and praising Mandela and Mbeki, they are merely applying the same divide-and-rule tactic that was constantly relied on by the apartheid regime when it sought to elevate some tribes above others, so that all the "lower" tribes could fight against the "higher" ones for attention from the white bosses – in the process consolidating the apartheid regime's power.

Unfortunately, some ANC members have fallen into this trap. They have assisted the opposition in attacking the ANC and Zuma. Some have, with the innocent intention of defending Zuma, attempted to expose mistakes that may have been committed by the two former presidents.

It is therefore important that ANC members stand guard against such dirty tricks from the enemy of the working class.

Voters should be aware of Mbeki's fears about Zuma

There is a principle in section 9(3) of the Bill of Rights that is relevant to the rise of ethnic politics since the accession of Jacob Zuma to the presidency. It aligns with the values of nonracialism and nonsexism that are foundational to the new order in South Africa and it reads:

"The state may not unfairly discriminate directly or indirectly against anyone on one or more grounds, including race, gender, sex, pregnancy, marital status, ethnic or social origin, colour, sexual orientation, age, disability, religion, conscience, belief, culture, language and birth."

It is a fact that the "security cluster" of the Zuma Cabinet is over-populated with isiZulu-speaking loyalists who happen to be men. This gender and ethnic discrimination has occurred despite the express constitutional accountability and responsibility to act in accordance with the Constitution imposed by section 92(3)(a) on the Cabinet and affirmed by the oaths of office that are mandatory and require the Cabinet to swear (or affirm) obedience to the Constitution.

That the Zuma-headed Cabinet is as it is can probably be attributed to his propensities on which former president Thabo Mbeki warned both before and more recently after the rise of Zuma. In Mark Gevisser's account of the concerns Mbeki harboured about being succeeded by Zuma, it is alleged that Mbeki "worried that Zuma and his backers had no respect for the rule of law, and would be unaccountable to the constitutional dispensation the ANC had put into place if they came to power.

There was also the worry of a resurgence of ethnic politics, and — given his support from the left — that Zuma's leftist advisers would undo the meticulous stitching of South Africa into the global economy that Mbeki and his economic managers had undertaken over 15 years." (The Dream Deferred, page xli, Jonathan Ball, 2007].

Voters cannot say that they weren't alerted to the trajectory on which they have placed the country by putting their trust in Zuma. Given Mbeki's many fundamental concerns listed by Gevisser, ethnic politics is but one of the grave matters that should give cause for pause when next the X is placed on the ballot paper at election time. — Paul Hoffman SC, Institute for Accountability in Southern Africa

Genocide claim is hard to swallow

Intellectual property and medicine is again in the news! The January 17 to 23 edition of Mail & Guardian carried the banner headline: "This is genocide."

The accusation was levelled by the minister of health against companies developing new medicines (so-called big pharma). The department of trade and industry wishes to change the law relating to patents, addressing, inter alia, how patents are granted in relation to modifications to existing patented items.

That is not surprising. The government has taken this stand before, and it is also aware of the concern it causes to those companies whose key investment is in novelty (that is, providing new, safe, effective and high-quality medicines).

Not surprisingly, the industry wishes to air its views on the proposed amendments.

What is surprising in the context of the "leak" is the accusation of "genocide". This is reminiscent of claims by an earlier minister of health that antiretroviral medicines were "poison".

That contentious issue was addressed by cool heads and resulted in the major successes that South Africa achieved in the management of HIV and the prevention of mother-to-child transmission of the virus. Hyperbole must not obstruct the search for new medicines.

On the same day as the M&G article appeared, an article in Business Day drew attention to a study, published in the United Kingdom journal The Lancet, on the crisis in the management of drug-resistant tuberculosis in South Africa. Multidrug-resistant TB is rampant in certain areas of the country and incurable patients are being sent home from hospital in their infected state, posing a danger to families, friends and the communities in which they live.

It is even suggested that the old approach of using special sanatoria for such patients needs to be considered again.

The issue is a challenge for the department of health. But the study also highlights the desperate need for new medicines to treat TB in South Africa. Doesn't this indicate that the government needs to work closely with the research-based industry rather than accuse it of genocidal tactics, when none exist?

Both sides, government and industry, have legitimate interests and concerns when it comes to intellectual property rights, in all areas. The issues are complex, of international interest and need to be addressed by cool heads, without hysteria.

The term "genocide" is misplaced in the context. For both parties, the welfare of sick patients takes precedence.

These are the views of a retired pharmacist. – Kevin McKenna, Bryanston

The pattern is now well established: crisis, intervention, promises by the Zanu-PF regime to behave, and then relapse after a decent interval to the sort of behaviour that prompted the latest crisis in the first place.
Read more
Friday

Taking its cues from the dimming of the hope suggested by rainbowism, ‘A New Country’ attempts to articulate the depths of betrayal South Africans feel
Read more
Opinion