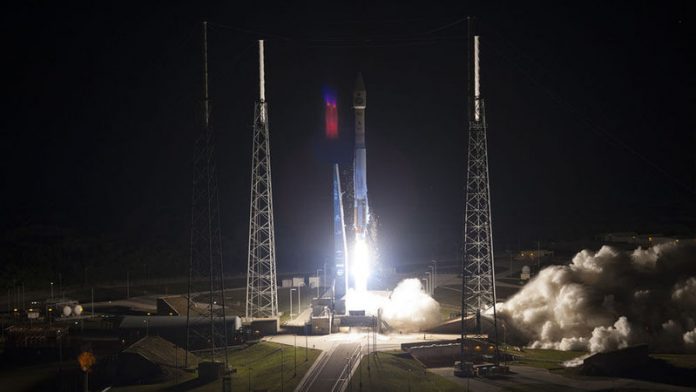 The 19-storey tall Atlas 5 rocket, built and launched by United Launch Alliance, a partnership of Lockheed Martin and the Boeing Company, lifted off at 4.33am on Friday (9.33pm EST on Thursday).

With the 3 447kg Boeing-built Tracking and Data Relay Satellite perched on its nose, the rocket blazed through clear, star-filled skies as it headed southeast over the Atlantic Ocean toward orbit.

The satellite, called TDRS, is the 12th built for a Nasa constellation that circles more than 22 300 miles (35 888 km) above Earth. The satellites are strategically positioned over the Atlantic, Pacific and Indian oceans where they can continuously track and communicate with the space station and dozens of other fast-moving spacecraft about 35 400 km below.

"This capability is analogous to standing at the top of the Empire State Building and tracking an ant as it marches its way down the sidewalk in front of the building," Boeing programme director Andy Kopito told reporters during a pre-launch press conference at the Kennedy Space Centre on Tuesday.

Satellite network
Eight members of the network currently remain in orbit. Two have been decommissioned and were incinerated as they fell back into Earth's atmosphere. A third satellite was destroyed in the 1986 space shuttle Challenger accident.

Nasa ordered a 13th and final TDRS satellite to ensure the network can operate through to 2030. By then, Nasa expects to transition to laser communications and other upgrades that will significantly boost capability and cut costs, said Nasa deputy associate administrator Badri Younes.

Nasa paid a combined $715-million for the TDRS satellite launched on Thursday and its predecessor, launched in January 2013, Younes said.

That amount covered ongoing upgrades to its prime ground communications station in White Sands, New Mexico. The next satellite, which should be ready for launch in 2016, will cost about $290-million. TDRS network operation and maintenance add another $70-million to $80-million a year, Younes said.

Multipurpose satellites
Besides supporting the space station, a $100-billion project of 15 nations, the TDRS satellites are used by Nasa's fleet of Earth-observing satellites and telescopes, such as the Hubble observatory.

Other agencies, including the US military and non-US space agencies, use the TDRS network on a part-time and as-needed basis. The tracking and communications services are also available to commercial companies, including United Launch Alliance, which uses TDRS to track its rockets during liftoff.

One minute on TDRS's highest bandwidth, which is 300 megabits per second, costs $139, Younes said, although many non-Nasa users barter for time on the network. Nasa is shifting from per-minute fees to charging based on percentage of use, he added. – Reuters