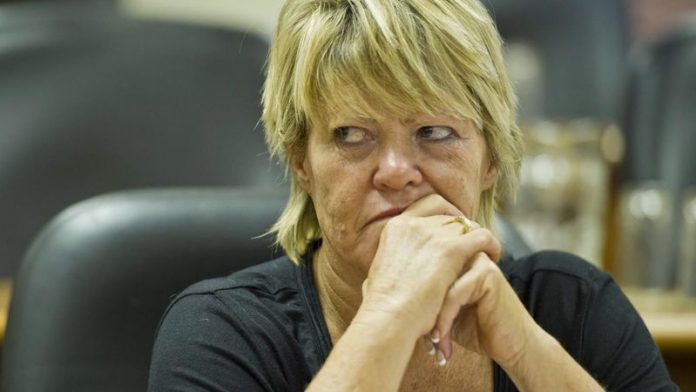 One has already been called a spy, one will face highly suspicious colleagues, and the third will likely see a whole new category of allegations against her.

By the middle of the year, they will very likely have special legal privileges and will be given the honorific "honourable" as members of Parliament for the Democratic Alliance (DA). But first ministerial staffer Ricardo Mackenzie, police brigadier Pule Thole and public prosecutor Glynnis Breytenbach are all going to have a tough last few weeks – or perhaps just days – in their current government jobs.

"To us there is no turning back, trust has been irrevocably damaged, the ministry is reviewing its relationship with him," said Paena Galane, spokesperson for sports minister Fikile Mbalula on the weekend, on what he termed the "coming out" of Mackenzie. "We long suspected that he is a DA mole in the minister office planted amongst others with the ulterior motive of disrupting our programmes and hurting our movement, the ANC."

Mackenzie, a former staffer for Thabo Mbeki and ANC members, is technically still the private secretary to Mbalula, a position that makes for access to the most sensitive information that flows through his office. On Friday he informed a superior that he was joining the DA, and would probably hold office for the party. On Saturday the DA trumpeted his defection. The response from his employer did not skimp on the sarcasm.

"We wish him all the best, as we believe he will be a useful 'rat' for us in the future," Galane said on behalf of the ministry.

But Mackenzie at least has some distance from his putative boss. He was seconded to the World Anti-Doping Agency some months ago. The sports ministry now says that was done because his duplicity had been detected and he was moved to isolate him, although Mackenzie’s own account is rather different.

Tough working days ahead
Pule Thole does not have the benefit of distance. The South African Police Service brigadier said on Saturday he would tender his resignation in time to leave the police force by April, but indications are that he’ll find his job tough until then.

"We have enough politics here just with the MK thing and the ANC factions," said a police member of similar rank on Sunday. Although he dismissed Thole as "a nobody", he also said the brigadier could expect a bumpy ride of office politics not dissimilar to that experienced by the managers of police crime intelligence in recent years.

"If you are a brigadier you know things. There are things people don’t want to hear about in [Parliament]. You think he’s not going be discredited before he leaves?"

While both Mackenzie and Thole have been essentially dismissed by ANC loyalists as minor figures, Glynnis Breytenbach already has national stature, and her inclusion on the DA ticket will be a sore point in a National Prosecuting Authority (NPA) regularly accused of allowing political consideration to sway decisions in criminal matters.

Political intentions
Breytenbach was initially treated as a "confidential candidate" in the DA list released on Saturday, but that secrecy did not last the day. By Sunday both she and the party had confirmed her inclusion.

The party said it looked forward "to what will undoubtedly be an exciting election campaign and partnership with this incredibly talented candidate."

Breytenbach will be leaving a post that she had regained – possibly only temporarily – despite a war of attrition fought by the NPA. Breytenbach has steadfastly claimed her disciplinary and legal troubles with her employer stemmed from interference in the failed attempt to prosecute crime intelligence head Richard Mdluli.

While she is due to work out a notice period before leaving the NPA, an insider said finding a mechanism for her to vacate her position sooner than later would suit all involved. But her move into politics would also cement the belief that her motivations in pursuing cases involving government officials or empowerment deals had not always been pure.

"She can tell us she wasn’t working towards an office, but we don’t have to believe her."

Jiba calls on Mokgoro inquiry to protect the NPA’s independence