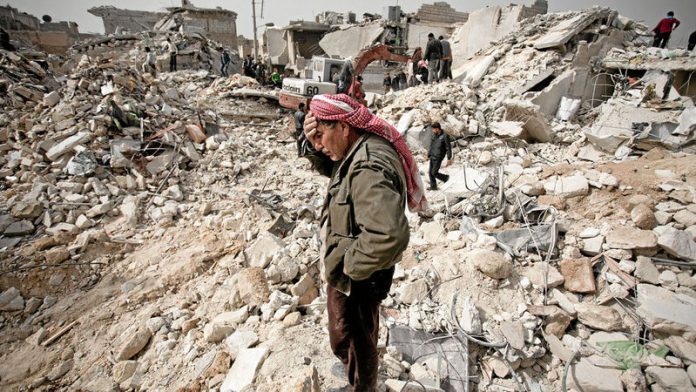 The Syrian government has demolished thousands of buildings, in some cases entire neighbourhoods, in parts of Damascus and Hama, to punish the residents of rebel-held areas, Human Rights Watch has found.

Satellite imagery taken over the two cities has revealed seven areas where neighbourhoods have either been largely destroyed or totally demolished. None of the destruction was caused during combat. Rather, the buildings have been systemically destroyed using bulldozers and explosives placed by troops who first ordered residents to leave, then supervised the demolitions.

According to a report released on Thursday, the Syrian regime claims the demolitions were part of an urban planning programme to remove illegally ­constructed buildings.

But Human Rights Watch says the motivation was to punish areas that were deemed to be sympathetic to opposition groups. It says the destruction violates international law and the laws of war.

Widespread abuse
Claims of widespread abuse have routinely been levelled by both the government and the opposition during almost three years of war in Syria, which has killed more than 130 000, displaced close to eight million, led tens of thousands to disappear and battered the country's renowned heritage sites. But the scale of the physical destruction has been difficult to document, with reporting limited by government visa restrictions and the intensity of the fighting.

"Wiping entire neighbourhoods off the map is not a legitimate tactic of war," said Ole Solvang, emergencies researcher at Human Rights Watch. "These demolitions are the latest additions to a long list of crimes committed by the Syrian government."

Using satellite imagery, the organisation has compiled a dramatic series of before and after shots that it says show 145 hectares, the equivalent of 200 football fields, where the state policy has caused near total­ destruction. Some demolitions took place near areas such as the Mezzeh airbase and the international airport, which the opposition views as strategic.

The Mezzeh and Tadamoun areas of the capital, both opposition strongholds, have been particularly heavily hit, the images show. In Hama, where former president Hafez al-Assad killed tens of thousands of residents and wiped out neighbourhoods over several days in 1982, widespread destruction has again taken place. Satellite images show that the Masha al-Arb'een area has been wiped out.

Researchers compiled the report after viewing 15 satellite images and speaking to 16 witnesses to the demolitions. Government statements, interviews with officials, and videos depicting the destruction were also used.

"No one should be fooled by the government's claim that it is undertaking urban planning in the middle of a bloody conflict," said Solvang. "This was collective punishment." – © 2014 Guardian News and Media