A legacy of empowerment 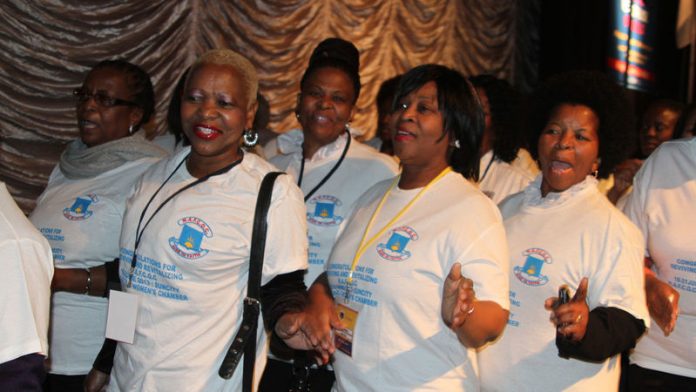 The history of black economic emancipation would be incomplete without the substantial role played by the National African Federated Chamber of Commerce and Industry (Nafcoc) over the past 50 years.

Nafcoc’s origins were in the early 1940s when informal black trader organisations in and around Johannesburg began to recognise the need to sharpen their business acumen and raise the level of business awareness among their members.

This movement led to the formation of the National African Chamber of Commerce (Nacoc) in May 1964 at a conference held at Orlando, Johannesburg.

This certainly put the former government on notice with what was then considered a very serious challenge to the way it perceived the role of black business.

In 1969, in circumstances that required a more regionalised approach to its economic agenda, Nacoc was reorganised into regions under the umbrella of a National African Federated Chamber of Commerce and the new name Nafcoc was coined.

This was done despite a government injunction against the forming of a united multi-ethnic chamber of commerce in South Africa.

The apartheid government was at the height of its drive to segment the African population and isolate each ethnic group in its own so-called homeland.

The government had passed innumerable laws and regulations meant to restrict and stifle business initiatives and enterprise among black people in the country.

Under such a policy, black people were essentially relegated to operating insignificant businesses outside the periphery of all commercial centres in the country.

In 1979 legislation was passed that allowed black businesses to trade in their own areas, although still not in the designated white areas.

During the 1970s and 1980s Nafcoc continued its struggle for a place in the South African mainstream economy for black business people. Its stance in the economic arena was becoming even more combative, with policies pushing for changes in the way corporates did business.

Hardships and achievements
Nafcoc embarked on a number of ventures to meet the aspirations of its members in doing something for themselves.

It initiated a number of black-owned enterprises such as The African Bank (in 1975), Blackchain (supermarkets), Black Business Publications, Sentry Assurance (insurance), Nafcoc Via (travel agency), Soshanguve Shopping Centre, African Development and Construction Holdings (building construction) and its Management and Leadership Development Centre to train managers for the future.

Nafcoc’s bursary fund, the Masekela-Mavimbela Scholarship Fund, has contributed to the success of many leading lights of today. Nafcoc was blessed to have counted among its members a number of successful entrepreneurs at the top of their game in the current economic landscape.

Some became politicians and others, such as Dikgang Moseneke, Vuka Tshabalala and Willie Seriti, served Nafcoc notably in the upholding of legal justice.

With the early release in 1989 of the Rivonia trialists, Walter Sisulu, Govan Mbeki, Raymond Mhlaba, Andrew Mlangeni, Ahmed Kathrada and Elias Motsoaledi as well as Wilton Mkwayi, Oscar Mpetha and PAC leader Jafta Masemola, Nafcoc’s provincial arm, Soutacoc, was the first organisation to host and acclaim their release at its conference in late 1989.

On February 2 1990, the date on which Nelson Mandela was freed, the political scenario changed dramatically.

On April 27 1994 the country went to the polls and elected its first non-racial democratic government into power.

Nafcoc was now poised to meet the challenges and opportunities that arose in the new South Africa.

Having endured years of fighting for the upliftment of those disenfranchised by apartheid, Nafcoc was seen as the leading voice of black business.

Even with its eminent leader, Dr Sam Motsuenyane, retiring in 1992 after 24 years of yeoman service, his successors were of a high calibre.

Nafcoc continued to drive key policies and developed an economic policy document under the chairmanship of Professor Wiseman Nkuhlu as well as a land policy document.

The presidency of Archie Nkonyeni initiated the early forays into potential black economic empowerment (BEE) deals and, during his term of office, a strategy committee was set up in 1993 under the chairmanship of Joe Hlongwane, his then deputy, to look at a Nafcoc going forward post-1994.

One of the committee’s resolutions was the incorporation of an investment company, Nafcoc Investment Holding Company Limited (Nafhold).

After Joe Hlongwane was elected president in 1994, Nafcoc continued to drive policies through forums such as Nedlac, address the tax issues of its members with government, instituted two policy studies relating to barriers to entry to trade and to the South African investment Climate, and made a presentation to the Truth and Reconciliation Commission on the state of black business during the apartheid years.

Nafhold was later incorporated in October 1994. Its intention was to create a vehicle that would create opportunities for Nafcoc members and empower them at grassroots level.

With the advent of a new democracy, many Nafcoc leaders were headhunted by other organisations to play a role in their development in addressing the new challenges they faced with a change in government.

Nafcoc was no different. Its secretary-general, Michael Leaf, joined Deloitte in 1994. Nafhold pursued deals since its incorporation in 1994, but the company was insolvent by 1998.

Hlongwane, concerned about the state of affairs at Nafhold, approached Leaf in 1997 to consider coming back to the fold to revitalise Nafhold. Leaf duly obliged in May 1998. Nafhold faced a series of challenges in its early years.

Good deals were hard to come by. Some members referred to Nafhold as a “spaza company”.

Attempts at various conferences to get members to buy shares in the company drew a blank. The only ones prepared to make any contribution were Hlongwane, Leaf, Mandla Ndlovu (president of Nafbi, later Nafcon), Steve Skhosana and Abram Napo.

Skhosana later disposed of his interest and Napo withdrew his funds due to financial problems.

A war of attrition arose in one particular quarter with a certain JSE-listed company that attempted to decimate the wealth that Nafhold had built over the years.

Nafhold management then came up with an ingenious strategy to not only secure funding for the Nafcoc constituencies but, at a time, to generate value for Nafcoc members who had served the organisation well over a number of years.

The whole purpose was to make the affiliate chambers self-sufficient, to ensure Nafcoc had sufficient resources to be on an equal footing with other major business chambers in South Africa.

Its first initiative was to secure funding through a preference share arrangement with Makalani Holdings in 2008. This ensured that R115-million was raised, which was distributed to all 17 Nafcoc structures in tranches to ensure proper accountability and responsibility.

What the effect of this transaction had on Nafcoc and its members was a “legacy of true empowerment”.

A dividend of R1.14-billion was paid out; R500-million in preferential shares was re-invested in Tsogo Investments to ensure that Nafcoc and its constituencies received R40-million each year in dividends over seven years and still have their R500-million available to them at the end.

This would ensure that Nafcoc and its 17 structures would never be short of resources to run their operations.

A sum of R471-million (of which R201-million was paid to settle the Makalani debt) was distributed through certain special purpose vehicles to qualifying Nafcoc members in their personal right.

With 85% of its wealth distributed in this way Nafhold has ensured that not only are its structures secured for life, but its members can make a valuable contribution in uplifting their communities with their new-found wealth.

The National African Federated Chamber of Commerce and Industry (Nafcoc) is an independent and voluntary business support organization that serves primarily, but not exclusively, the black community.

Its main objective is to promote and encourage the development of black business in South Africa and thereby draw the black majority into economic activity and decision-making.

It aims to promote a spirit of co-operation and unity among black business people, to encourage self-help in the black community and full participation in the economy of the country.

It consists of 5 000 members, concentrated in the merchandising, building, transport, agricultural, services, manufacturing and informal sectors of the economy.

Nafcoc is a federation of nine provincial Chambers of Commerce and Industry consisting of 218 regional, municipal and township chambers which represent black businesses across the country.

The text and phographs on this article we supplied and signed off by Nafcoc. It forms part of a larger supplement that has been made possible by the Mail & Guardian's advertisers.