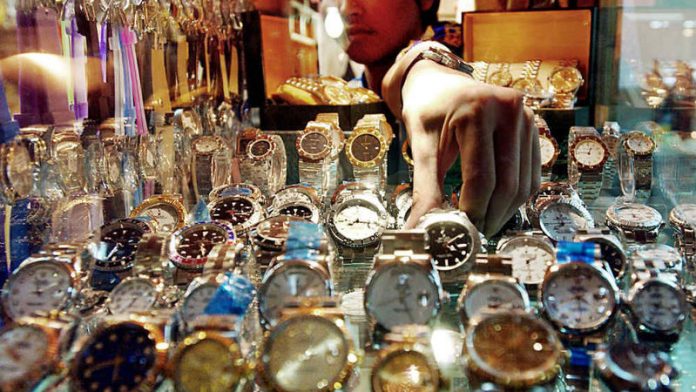 Swiss watchmakers are devoting 2014 to convincing women like Mo Oshodi to covet timepieces the way she does her shoe collection.

"I have three watches, but probably 300 pairs of shoes," said Oshodi, a 38-year-old buyer for fashion brands in London. "It's such a big investment, I'd rather just buy one and hold it. And buy more shoes."

After 2013 marked the slowest sales growth since the global financial crisis, companies from Audemars Piguet to Richard Mille have said they are targeting women, seeking to secure new customers from a segment that only accounts for 35% of sales at the moment. Industry executives acknowledge that females have been overlooked by the $50-billion industry in recent decades in the race to outfit the wealthiest men with wearable status symbols.

"For many, many years, the watch industry didn't communicate with women, period," said Francois-Henry Bennahmias, chief executive of Audemars Piguet, who aims to boost his brand's percentage of sales to women to 35% from 25% in the next three years.

The industry's expansion slowed last year as a crackdown on extravagance in China wiped an estimated $1-billion from watch sales, with Swiss exports to the country falling 15% through November. To offset that impact, high-end brands including Patek Philippe are using new approaches to appeal to women, such as advertising more in fashion magazines like Vogue and opening stands in department stores rather than expecting women to frequent watch shops. At the Geneva watch show last month, attempts to lure consumers ranged from bling to see-through dresses.

'100% macho'
While some may see the approach as sexist, companies are still trying to figure out the best way to garner female interest. After Richard Mille wrapped its hostesses at the fair in transparent frocks to highlight a spider-themed women's watch with black sapphires named for actress Natalie Portman, it had them buttoned up in high-collared shirts a few days later. Richard Mille said the two different fashion statements reflect "the multifaceted and demanding lifestyles of our lady clients", according to Beatrice Giusti, a spokesperson for the brand.

To Jean-Marc Jacot, chief executive of Swiss brand Parmigiani, Richard Mille's approach showed that watchmakers aren't sure how to reach women. "We're in a very conservative industry, 100% macho," Jacot said. His tactic is to engage Italian jeweller Pomellato, known for its gemstone stacking rings, to design colourful women's watches that Parmigiani can display in Geneva.

Aviator watches
Wristwatches were predominantly women's jewellery until the 1900s, when World War I and industrial work made men's pocket watches impractical. Cartier made a wristwatch for aviator Alberto Santos-Dumont in 1904, and companies began churning out chronographs meant to survive diving and auto racing.

There is plenty of upside in getting women to shell out $125 000 for the latest diamond-encrusted Ballon Blanc watch from Cartier, though it may take another 10 years to reach equilibrium with sales to men, said Luca Solca, an analyst at Exane BNP Paribas.

Companies successful in reaching women may win in the profitability game, as bejewelled timepieces can have higher margins than what the industry calls "mechanical" watches, Solca said.

'Guy thing'
Montblanc learned the lesson without even asking women what they want.

It stumbled onto the female watch market last year with the Star Classique, a smaller timepiece intended for men. Women bought so many that Montblanc added diamonds. The most expensive runs about $8 300, compared with $4 700 for the priciest of the Star Classique models meant for men.

Diamonds and movie stars like Portman aren't enough to entice women to buy a watch, said James Dowling, co-author of The Best of Time: Rolex Wristwatches. Women are more likely to buy a dress or shoes to display status, while watches are still "such a guy thing".

Dowling said the industry needs more women in leadership to figure out their feminine marketing, a point made by Johann Rupert, the billionaire who controls Cartier-maker Richemont. "We need to listen to their views," Rupert said in September. "We need people who can actually say, 'hang on, that's rubbish. No woman will ever buy that'."

Bejewelled watches
One exception is Nayla Hayek, the chairperson of Swatch Group. She helped lead last year's $1-billion purchase of Harry Winston to expand in bejewelledwatches for women.

Jaeger-LeCoultre, known for its iconic reversible watch for polo, now touts a timepiece "destined to be a girl's best friend".

Baume & Mercier aims to "seduce and surprise all women" with a new collection in June, chief executive Alain Zimmermann said. Its Linea watches have straps in orange and poppy red that women can change to liven up their wrists.

Still, many watches remain priced out of even the most fashionable woman's budget. In its first-ever offering for women, Gruebel Forsey showed one of the priciest watches at the Geneva show. With 272 diamonds, it goes for 750 000 Swiss francs ($835 000). That would buy about 1 000 pairs of Manolo Blahnik Cetto pumps, according to the current retail prices. – Bloomberg

Who cares about Johann Rupert anyway?

Baleka Mbete: ‘Throwing stones at each other is very unANC’

When CEOs call themselves activists and activists become CEOs