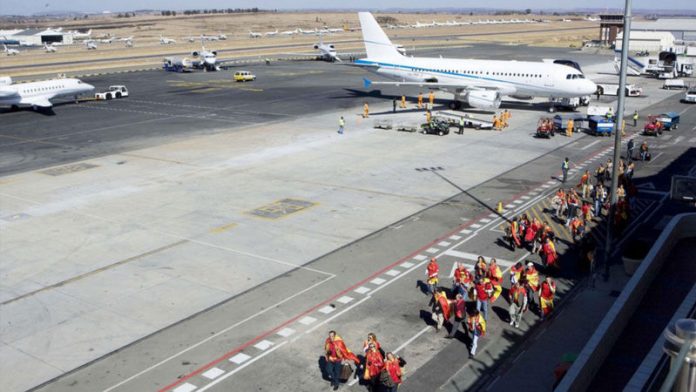 Paramedics from Netcare 911 initially confirmed two deaths in the crash on Monday morning but this was later revised to three by the airport's chief executive Gavin Sayce.

"Something happened and it crashed on landing. It was flying in from one of the local airports," said Sayce. "All three people on board have died."

The King Air 90 plane reportedly went down in heavy rain and burst into flames while attempting to land in bad weather at the airport north-west of Johannesburg.

ER24 spokesperson Russel Meiring told the South African Press Association earlier in on Monday that passengers on the plane died but could not immediately confirm the number.

A photograph on Eye Witness News' Twitter page showed a fire raging at the airport, amid lashing rain.

"Smoke came out and I saw fire and a few minutes later emergency vehicles arrived," an eyewitness told EWN.

It had reportedly missed the runway, and crashed in an open area near the ExecuJet building.

The identities of the deceased have not yet been released as their next of kin are yet to be informed.

Public Enterprises Minister Malusi Gigaba extended condolences to the families of the victims.

"Our sympathy to the families, even though we do not know what happened yet. We send our condolences and hope God will comfort them."

The King Air 90 is a twin-turboprop aircraft produced by Beechcraft.

Sayce said the crash has not affected airport operations, as the wreckage is far from the runway. – additional reporting by Sapa.