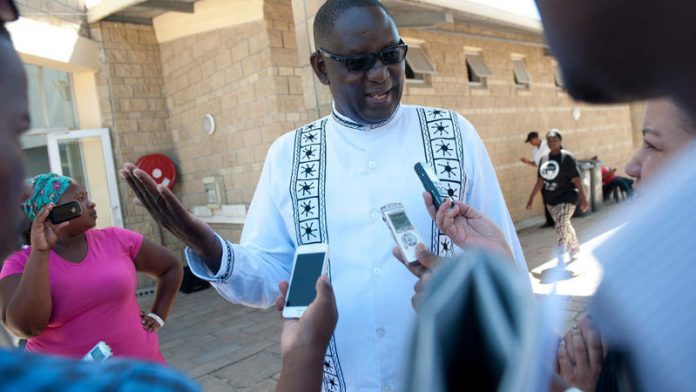 When suspended Cosatu general secretary Zwelinzima Vavi attended the Khayelitsha commission of inquiry into policing on Monday, he could not contain his anger as he described a series of alleged police blunders after his sister's grandchild was murdered in the township.

Vavi said the police had taken five days to inform the family about the murder of  25-year-old Busiswa Sizaba in Harare, Khayelitsha two weeks ago.

"Tuesday, the police arrive to say your granddaughter was found dead somewhere in Khayelitsha on the Friday," said the labour leader, who was wearing a black and white shirt reminiscent of those favoured by the late Nelson Mandela. "When they arrive, it's on the fifth day since she has died."

While Sizaba had frequently been a victim of domestic violence in her shack, Vavi said police had failed to apprehend a known suspect, who he described as "the king of the reign of terror" in the community.

"The police have been investigating this guy, clearly now a murder suspect. Nothing has happened," Vavi said furiously as a small crowd of residents and social justice activists gathered around him. "It is now the end of the second week since that murder has happened. The guy is still roaming the streets."

What really upset Vavi was that police had also told his family Sizaba's body was found in the street, yet when the family went to the shack where she had lived with her boyfriend, the police's story had changed.

Vavi flew to Cape Town on Sunday to bury Sizaba and his pain was still raw, he said.

Many tragic stories
The Mail & Guardian sent questions to police on Sizaba's case, which is one of the many tragic stories that will eventually come before the commission. Police wrote back to say they would attend to the query.

Vavi's appearance at the commission caused a stir, as it was appointed following a court dispute over its establishment by Western Cape Premier Helen Zille in August 2012.

The commission was delayed by a year when Police Minister Nathi Mthethwa unsuccessfully challenged its validity in court, only starting up again last week. It was mandated to investigate the alleged inefficiency of the police in the area and the breakdown of relations between the Khayelitsha community and the police.

Commissioners Justice Kate O'Regan and advocate Vusi Pikoli are overseeing the commission in a community hall in one of Khayelitsha's main tourist sites, the Lookout Hill.

Vavi spoke to journalists outside the community hall, while expert witnesses were being heard by the commission.

Now working as an activist during his suspension, Vavi said he had still not been given a date for his disciplinary hearing by Cosatu. "There are no dates, and they are bringing charges," he said. The next battle would be over the fact that he had been told he would have to have a senior counsel, and Cosatu is refusing to pay for it.

Vavi was suspended in August last year, and Cosatu charged him with financial irregularity and bringing the federation into disrepute for having sex with a junior employee at work.

More family time
Asked if he was getting more family time with his wife, Noluthando and 12-month-old twins, Vavi said: "My children can't be more happy. They can't believe they are seeing me more at home. Finally, the man is around."

Accompanied to the commission by Zackie Achmat, the community activist who was involved for years in pushing for a commission in Khayelitsha, Vavi's visit was seen by some activists as a show of support for the work being done.

While Vavi had been hoping he could give evidence on his own experiences, it was too late to put him on the long witness list as the commission has already commenced. However, his family will still be able to submit affidavits to the commission.

After sitting and listening to a morning of expert testimony on the problems facing police, forensic experts and families of victims in Khayelitsha, Vavi said he felt aggrieved. Not just for his own family, but for all those who fall victim to crime and policing in the country.

"I think Bheki Cele did very well during his term. What is going on now is about basic management and basic leadership being missing," said Vavi. "And I have been debating in my mind what has gone wrong and what we need to do about this position of police commissioner. My feeling is that you can't just pick up anybody in the street as a police commissioner."

Vavi said he could not make a judgement about Riah Phiyega, after being asked by a journalist: "Is Phiyega not the worst police commissioner South Africa has ever had?"

"Phiyega has been handed a poison chalice and she can never win," he said. "She is a not a police officer. She has no experience, and she has no background and should come and learn here, just like I am learning. Then you can't expect anything. Then all of those things like these forensic aspects, she doesn't know anything about it. She will have to learn, just like I have had to learn all about it."

Phiyega had been given a job she should not have, said Vavi.

Achmat said he would probably submit the affidavits for Vavi's family." The commission is still accepting affidavits but they won't be able to go on the witness list," he said.

"It is a sense of justice for people. It has been excellent from a point of view of learning more about Khayelitsha. It has been like school for me, to hear these expert witnesses."

Achmat said he had talked to police and its legal representative at the commission. "For us it is about trying to fix it together. People have real power to do something."

Vavi's visit was seen as a boost for the Khayelitsha community, which is plagued by crime, said some residents outside the hall.

"I have come to assist civil society formations. I am happy that I have come here," said Vavi.

"This is one of the great initiatives they have taken. My hats off to all of them as they forced, first of all the Western Cape government, then the national government, to allow this commission to be heard. And what we are hearing is horrifying."