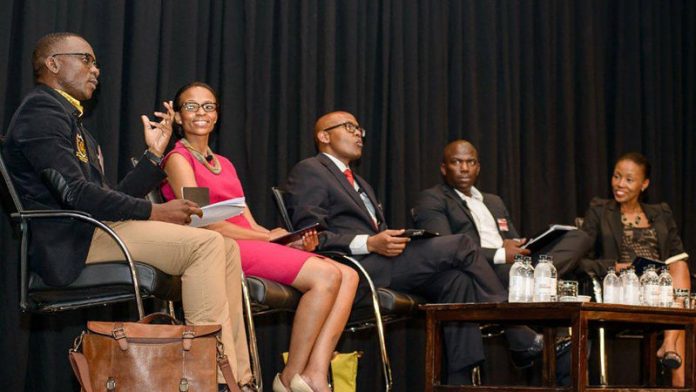 The afternoon session of the 20 years of economic transformation debate was summed up best by audience member Sifiso Memela: “I was quite disappointed when I looked around the room and realised there were too may black folks that attended this discussion.”

Memela, an entrepreneur who supplies the mining industry, spoke of his frustration from operating in a market in which the odds are still heavily stacked against black entrepreneurs.

“The economy of this country remains very much in white hands and that means we should be having discussions with the people who control this economy. For us to be sitting here amongst ourselves suggests it is a meeting of the have-nots talking about trying to dissect that cake that we do not have,” he said.

This exclusion from entrenched networks and opportunities was at the core of the discussion about the potential for entrepreneurship to address youth unemployment.

The prevailing sentiment, however, was one of an audience frustrated by the failure of the political freedom won two decades ago to translate into economic freedom.

Xolani Mtshizana, a young businessman who has won multiple entrepreneurship awards, bemoaned the fact that he and many others like him are still hamstrung by the lack of support – particularly access to capital and markets.

“I’m a frustrated entrepreneur,” he said. “Who benefited from BEE? It’s the political elites and their friends. It should not be as hard as it is for someone trying to get out of a rut. We need to revisit the policies to say: how can we make them work? They need to be more inclusive. We need to find a way to make the policies more lenient.

“It is very difficult for an entrepreneur, and the danger is it leaves the space for political populists to destroy the democracy we have been fighting for.”

The politics of the economy were taken up by Jimmy Manyi, president of the Progressive Professionals Forum, who suggested that legislative changes lie at the heart of the solution.

Providing goods and services to the public sector may be seen as low-hanging fruit by some, but given the scourge of tenderpreneurship and the many hoops businesspeople have to jump through, the sustainability of this as a case for youth entrepreneurship has to be questioned.

In an apparent argument against youth entrepreneurs, Manyi warned that they are setting up to fail unless they build up some market expertise and networks.

“I advise young people: for the first five years find some work somewhere, but work with an attitude. In that period build your brand and your networks, because without those you have a problem.”

Manyi’s solution, and one that the trade and industry department is currently pursuing, is to establish incubators that enable young entrepreneurs to build their capacity to participate successfully in the mainstream economy.

Fellow panel member Rapelang Rabana, a young tech entrepreneur, echoed Manyi’s concern over the type of entrepreneur emerging in South Africa, saying too many are “entrepreneurs of need, not opportunity”.

Manyi had suggested that true entrepreneurs are those who come up with innovative ideas and that those who “run a spaza shop” are merely self-employed.

The reality, as pointed out by Rabana, is that entrepreneurship is not for the faint-hearted, nor is it everyone’s cup of tea.

Simply telling people to get into business – whether as a true entrepreneur or the ‘self-employed’ spaza shop owner – is no guarantee theirs will be a sustainable business, let alone one that can create employment.

“No matter how much government invests through development institutions, you can never solve the problem of unemployment in South Africa unless you encourage large-scale, very small business ownership by the millions of young people who are the majority of our population,” he said.

Addressing the recurring complaints about access to capital, he noted that his agency was exploring the possibility of establishing a venture capital fund for and by young black South Africans.

“We want more blacks to become business owners, yet when you go to any bank they will ask for surety and guarantees that you don’t have. We have government [funding] institutions giving money back to Treasury because of these regulations that are not supportive of the youth of this country,” he said.

“Why can’t young people start their own venture capital fund?”

Rabana added that the traditional venture capital market in the country lacked depth, with finance skills centered on the banking and private equity sectors.

She suggested that government could reverse this by introducing incentives. She pointed to the case of Israel, where government matches foreign venture capital firms’ financing to attract this money and their expertise to the market. The growth of Israel’s small-business tech and innovation sectors is testament to the success of the scheme.

Matsi Modise of the SA Black Entrepreneurs Forum also raised the concern about the lack of an innovative culture. She cautioned that “South Africa is not a startup nation. We do not have enough innovative self-made entrepreneurs”.

She pointed to the rise of the tenderpreneurs and political entrepreneurs who relied on connections to win deals that benefited a few.

She added that this overshadowed the work of the likes of Herman Mashaba and Richard Maponya who had done the hard yards prior to democracy to build strong, sustainable businesses.

“It is very clear that a lot has to happen in our country and I think it’s a no-brainer that enterprise development is one of the few solutions toward developing an entrepreneurial culture and to progress this economy,” she said.

Commenting on the morning session in which it was suggested that BEE be scrapped as it had appeared to fail to meet expectations, Modise said it was too early to make such calls.

“The reason people deem BEE as not working is there is not enough monitoring and evaluation – it is too soon for us to say simply remove it. How are we to monitor its impact if we don’t have the models and tools to measure this?”

Returning to the issue of entrenched networks, Mtshizana made the poignant observation that while someone like Steve Jobs is held up as an icon of entrepreneurship, he had certain basic advantages that most black South African youths lack.

“He started in a garage in his mother’s house. Do South Africans have a garage to work from? Do they have a phone to make those sales calls?”