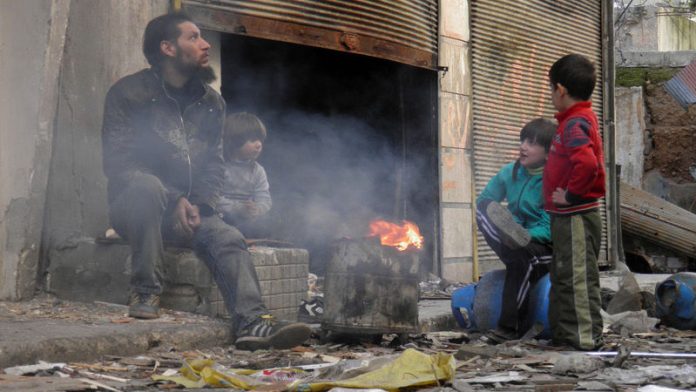 Syria evacuated three busloads of civilians from a besieged area of Homs on Friday, the first stage of a planned three-day humanitarian ceasefire in the city that has suffered some of the worst devastation of Syria's three-year conflict.

The buses carrying dozens of weary looking evacuees and accompanied by Syrian Arab Red Crescent officials arrived at a meeting point outside Homs, watched by soldiers and police.

The deal is the first positive result of peace talks that were launched two weeks ago between Syria's warring foes and resume on Monday in Geneva, with little prospect of resolving core grievances behind the war.

Under the Homs deal, women, children and old men are allowed to leave the Old City, which has been under siege by President Bashar al-Assad's forces for a year and a half, while humanitarian supplies will be allowed in to those who remain.

The World Food Programme said it had trucks ready to take a month's supply of food on Saturday to the estimated 2 500 hungry and malnourished people who have been trapped for months in the rebel-held heart of the city.

By Friday afternoon, about 80 people had been evacuated, a UN official told Syrian television.

It was the first time the Red Crescent had gained access to the centre of Homs since the siege began, the aid agency said.

Russia said a three-day ceasefire had been agreed in the city, which was one of the first areas to erupt in protest against Assad nearly three years ago and where street after street has been destroyed in heavy fighting between Assad's forces and rebels seeking his overthrow.

Syrian authorities had announced that evacuees would be given medical treatment and shelter. They said residents of Old Homs who preferred to remain would be sent humanitarian aid as well.

West sceptical
Moscow, which has supported and armed Assad throughout the civil war, hailed the Homs deal as a "landmark agreement". But Western officials gave a sceptical response, saying Syria had an unconditional obligation to civilians trapped by conflict and that the issue should not have required weeks of negotiation to allow aid to enter.

"The regime should let the humanitarian convoy in. Then the population should decide to stay or leave," said Jon Wilks, Britain's diplomatic representative to the Syrian opposition.

US officials said they feared for the fate of anyone who moved from rebel areas into government control. "We have reason on the basis of history to be very sceptical," US ambassador to the United Nations Samantha Power said.

Rebels have rejected similar offers to evacuate women and children in the past because of concerns about what might happen to any men, including fighters, who are left behind. Dozens of men were detained and disappeared after a deal last year reached in Mouadamiya, west of Damascus.

Unknown destination
Reports differed on where the evacuees were headed. Officials said they could choose their destination, but an activist in Homs said they were being taken to Al-Waar – a neighbourhood on the northwestern edge of Homs where many of the city's Sunni population have already fled.

"We are very concerned that some of the people who will arrive in Waar today will be arrested by the regime later," said Hassan Abuzain.

"Last night the regime shelled the Old City and this morning it shelled Waar, the very place we are sending these people to for safety."

He said one man who approached the first bus for evacuation had been shot and wounded by a sniper, blaming Assad's forces for the shooting. There was no comment from officials, who have frequently blamed rebels for firing on humanitarian convoys.

Television footage of one bus that brought the evacuees out appeared to show several bullet holes in the back of the vehicle, though it was not clear when the damage occurred.

First out
Homs governor Talal al-Barazi said earlier that the first group of evacuees from Homs would include children under 15, men over 55 and women.

He said reception centres had been set up to receive and treat people leaving the old city, although those evacuated were free to go wherever they liked.

"We are ready today to receive any number, even it exceeds 400, but according to the United Nations yesterday the expected number is 200, or it could be lower," he told Syrian television.

"We hope this first step will succeed and will continue tomorrow and after tomorrow and so on to ensure safe exit to all civilians who want to leave the old city."

"The atmosphere is positive," Barazi added.

He said some Christian residents were trying to leave the city centre but officials had not yet managed to secure them safe passage from their homes in the Hamadiya and Bustan al-Diwan districts of the city.

"God willing, we'll be able to provide better conditions for those who are in the old city to safely exit."

The Homs deal is potentially the first modest result to emerge from deadlocked peace talks in Geneva. The first face-to-face negotiations between Syria's warring sides began in the Swiss city two weeks ago and are scheduled to resume on Monday.

Humanitarian access to Homs had been the first item on the agenda a fortnight ago, intended to be a relatively consensual issue that could build momentum to address the far more intractable political divide between Assad and his foes.

State news agency Sana cited Deputy Foreign Minister Faisal Mekdad on Friday confirming that the government would attend the second round of talks and demand a discussion "article by article" of the 2012 Geneva Communique.

"Restoring peace and stability throughout the Syrian Arab Republic requires putting an end to terrorism and violence, as is said in the Geneva communiques," Mekdad said.

Armed insurgency
Syria's conflict began with peaceful protests against four decades of Assad family rule and degenerated into an armed insurgency after a fierce security crackdown.

Now the major Arab state is in a full-scale civil war that has killed more than 130 000 people and forced more than six million – nearly a third of the population – to flee their homes.

In the northern city of Aleppo on Thursday, the Islamic Front, Syria's largest Sunni Islamist rebel alliance, joined forces with the Nusra Front, an al-Qaeda franchise in Syria, to launch an assault dubbed "The just promise approaches", a reference to a Koran verse about Judgment Day.

The queen bee syndrome, whereby women in power consciously impede the development of other women in the workplace, is slowly gaining ground in South Africa
Read more
Advertisting
Continue to the category
Politics