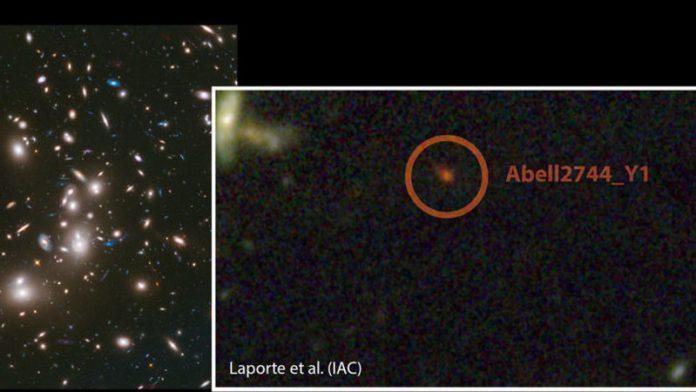 Astronomers have found an old and distant galaxy that is believed to date back to a time when the universe was just 650-million years old, a fraction of its current age.

The galaxy, known as Abell 2744_Y1, is about 30 times smaller than the Milky Way, but pumping out stars at a prodigious rate.

Another candidate galaxy, which was discovered in 2012, dates back to just 500-million years after the birth of the universe.

Abell 2744_Y1 is the first distant galaxy to be found during a new Hubble Space Telescope project that makes use of naturally occurring zoom lenses in space. These occur when objects with extremely powerful gravity, such as a cluster of galaxies, bend and magnify light from more distant objects, relative to Earth's line of sight.

Occasionally, the warped space will bring into focus a more distant object, such as it did with Abell 2744_Y1.

Distant galaxies
"The cluster of galaxies act as additional lens and can convert the mirror of the Hubble Space telescope to a mirror at least 10 times larger," astronomer Nicolas Laporte, with the Astrophysics Institute of the Canary Islands, wrote in an email to Reuters.

The technique, known as "gravitational lensing" has been used before to ferret out distant galaxies. But the new initiative not only taps the resolving power of Hubble, but combines its images with observations by sister telescopes that detect infrared and X-ray light.

With the right alignment, astronomers hope the cosmic lenses will reveal galaxies that formed as early as 300-million years after the Big Bang, Laporte added.

The research will be published in the journal Astronomy and Astrophysics Letters. – Reuters

Is maths any of their beeswax?