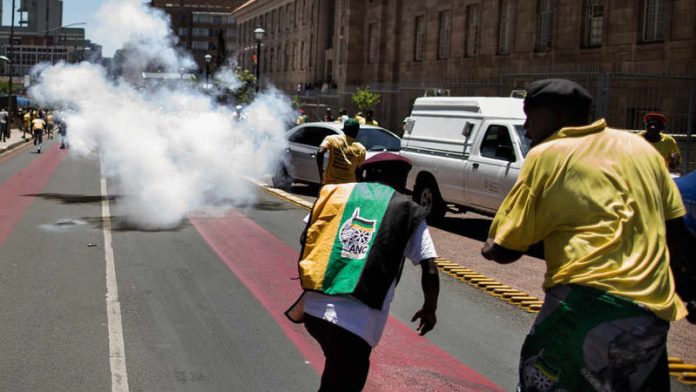 Matters turned violent as DA members arrived in Rissik Street, where ANC supporters allegedly threw bricks at police and DA members. "Our members [police] were stoned and petrol bombed. The stones were coming from the northerly direction of Rissik Street," said Mogale.

The DA supporters dispersed, but there was still a heavy police presence in the Johannesburg city centre.

Mogale said police would keep an eye on the situation and monitor ANC supporters gathered at Luthuli House. Police were not aware of any injured people, she said.

Meanwhile, DA leader Helen Zille said the ANC is a violent organisation that does not respect the Constitution.

"The ANC behaved like the ANC normally behaves," she told reporters after the disruption of the DA's march for "real jobs" in Johannesburg earlier.

"They can't be trusted to lead a democracy."

Illegal
She said the ANC held an illegal march and came armed. She questioned why the police did not stop them.

DA members boarded buses and left. Zille said she would consult her lawyers about taking legal action against the ANC.

DA spokesperson Mmusi Maimane said the ANC could not be allowed to carry on that way. "We can't accept this behaviour," he said.

"It is a violation of our democracy."

The DA never made it to Beyers Naudé Square, a block from the ANC's headquarters, Luthuli House, where it had planned to hand over a memorandum to the ANC.

Maimane said they were assured that a ruling party delegation would be there to receive it.

He said the DA came to march peacefully and it was the ANC that was violent.

Well-behaved
ANC ​spokesperson Jackson Mthembu, on the other hand, defended the ANC members, saying they were well behaved.

"I didn't see any violence. I only see people running and marching," he said. "If there was any violence, we would condemn it … but from where I am seated ours member have been well behaved. There was no threat from ourselves."

Police stopped the march on Marshall and Rissik streets saying it was too dangerous for them to continue.

A short while later, a group of people wearing ANC attire ran towards the marchers, forcing police to fire stun grenades at them.

On Miriam Makeba Street a group, also dressed in ANC attire, threw petrol bombs at police. Mthembu said he had not witnessed either of these incidents.

"If we saw anybody doing that we would have acted on that. We have heard of people carrying bricks but I didn't see that," he said.

"We don't accept any throwing of bricks on any matter."

Ill-advised
Mthembu blamed the alleged violence on the DA, saying they knew the march near Luthuli House was ill-advised.

"The DA hired a private security company, they were well armed. They are helmeted. They came to attack Luthuli House," he claimed.

"The march ended because the DA leadership decided on it. They did it on their own accord."

The march was stopped by police around midday and it was re-routed back to the Westgate transport hub.

Maimane told supporters to disperse peacefully. He said the ANC were losers.

"Comrades, victors are here and losers are there. When you get to the townships don't fight. We are not fighting with anyone. – Sapa