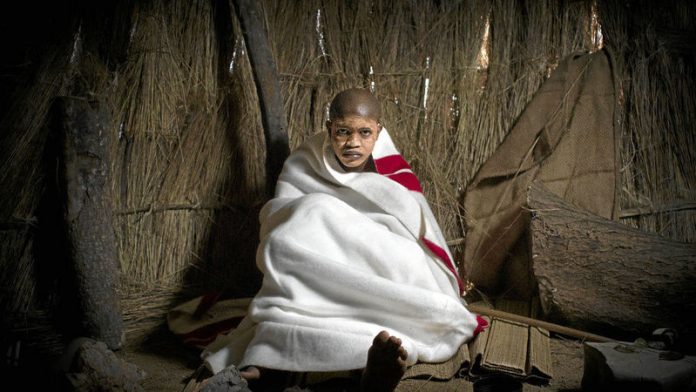 It's been touted as the first film to explore homosexuality within the context of traditional Xhosa initiation.

IBhokwe: The Goat, screened at the Berlinale in Germany last week, is partially adapted from Thando Mngqolozana's book A Man Who Is Not a Man. It follows the story of a young man who has been isolated from the other initiates.

Abandoned by his elders in a makeshift hut in the mountains, the young man is left with just his little brother to help him to recuperate following the traditional circumcision procedure. During this period of isolation, he suffers not only the obvious physical pain, but also emotional pain as he agonises over observing this traditional custom as a young gay man.

The result is a 13-minute-long, engaging movie written and directed by award-winning local filmmaker John Trengove. After two years of research, with the view of producing a feature film that explores this complex intersection between gay sexuality and tradition, Trengove and his producers, Batana Vundla and Elias Ribeiro, hope iBhokwe will generate enough interest as they look ahead to producing their feature-length film based on the same theme.

"The homoerotic possibilities of this world, which is a secret ritual among men, centred around the penis, have always been fascinating and compelling to me," Trengove tells the Mail & Guardian prior to the screening of the film in Johannesburg earlier this week.

When he and Vundla began research, they started by interviewing gay Xhosa men who had gone through this traditional rite of passage. "What we found was immediately fascinating," Trengove says.

Stories of young men who live double lives as out-of-the-closet gays in Jo'burg, but are completely closeted to their communities back home in the Eastern Cape, came to the fore.

What they also found is that there is a belief that initiation has the power to cure their homosexuality. "That obviously leaves a bit of a dilemma for gay men because firstly this is an important landmark of their lives as men, but at the same time there's an expectation that they must now marry and have children," says Trengove.

Most interestingly, and what iBhokwe is based on, is the reality faced by gay boys at initiation schools.

"There are boys who are ostracised in the communities either because they are bastard children or gay boys," says Trengove. "They are often neglected and completely abandoned over the period of three weeks, which is supposed to be the healing period after the initiation. There's a kind of rejection or discrimination that happens there."

These findings are confirmed by actor Nkosipendule Cengani, who plays the lead in iBhokwe. This movie, he says, contradicts the idea that only straight boys participate in this ritual. "In my opinion, after going through the initiation, one must be considered a man regardless of one's sexual orientation; but the reality is that, if you are gay, you are very likely not to get the same treatment as the straight guys."

At 19, Cengani himself has just been to initiation school – as recently as December last year.

According to reports, by the end of December 2013, 30 young initiates had already lost their lives in the Eastern Cape alone as a result of botched circumcision. But the discrimination against gay men during initiation barely makes headlines.

IBhokwe is being released at a time when homophobia is sweeping through the African continent, with many nations, most recently Nigeria, passing anti-gay legislation, citing African tradition as the justification. This idea, that homosexuality is "unAfrican", is something the film's producers believe is unfounded.

Although iBhokwe is entirely independent of the feature film Trengove and his producers are planning to make, he says the short film is a good way of introducing the idea of this story to potential investors and to generate audience interest.

"It's a very complicated terrain where you have to observe this tradition but also deal with modern-day realities. One of them is: Who are gay men in this culture?" he says.

"They are there and they've always been there. As an outsider, it is very interesting to me. My process, having done a lot of research, is a very personal one. I'm not trying to represent an entire culture. This is my own subjective hypothesis: What happens when people have to oppress who they are?"