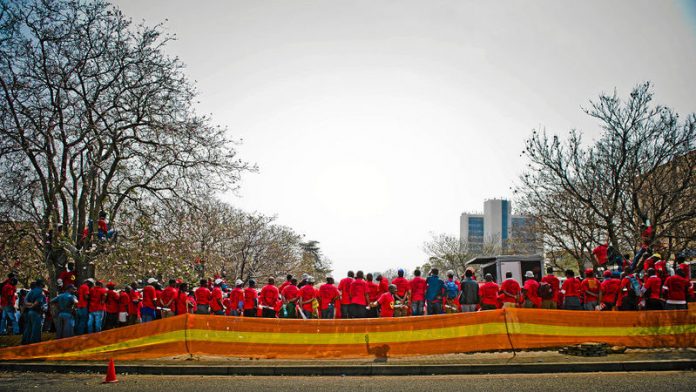 Hearts are being hardened among trade union federation Cosatu's affiliates. They want suspended general secretary Zwelinzima Vavi reinstated, but a powerful faction in Cosatu’s central executive committee is refusing to convene a special congress at which Vavi could be returned to power.

Threats of suspension or expulsion have so far failed to shake the disgruntled rebels, who want Cosatu president Sdumo Dlamini removed and the federation’s transformation into a radical workers’ movement that will not shy away from disagreeing with the ANC.

They include, among others, the withholding of support for the ANC in the May 7 general election and the call on Cosatu to dump the ANC-led tripartite alliance, which has the South African Communist Party as its other partner.

In response, Numsa has demanded from Cosatu the minutes of the committee meeting held on Monday, a full register of attendance with names of affiliates and their representatives, and the details of a discussion that led to a decision to write a letter to Numsa. It also wants details of resolutions and policies that Numsa is accused of contradicting.

"You will appreciate that we cannot respond to phantom allegations or alleged transgressions without being provided with the substrate and context giving rise to the federation’s current position," read the letter.

Numsa faces resistance from a powerful faction in Cosatu over their call for the federation to reinstate general secretary Zwelinzima Vavi. (Gallo)

Suspension
Numsa also warned Cosatu that its posture of considering suspension or expulsion against its biggest affiliate "communicates to us as potentially having the greatest impact, post-1994, on Cosatu".

Meanwhile, union leaders said this week they suspected that, if anyone was going to blink, it would not be the nine affiliates.

"We won’t walk away from Cosatu, they’d rather expel us, but if we are expelled we’ll take the legal route," said Katishi Masemola, general secretary of farm worker’ union Fawu.

"We can’t hand over Cosatu to some factional fellows."

A Numsa official said: "Even ourselves, we don’t want to leave Cosatu. But we have been asking ourselves, why should we be in Cosatu if there is nothing to gain? But we can’t leave. They must expel us."

National office bearers of the nine pro-Vavi unions were scheduled to meet on February 14 to plot their next step, which may include convening shop steward councils in all the provinces to lobby support for a court intervention to force Cosatu to agree to a special congress.

Dlamini told the Mail & Guardian he knew about the plan for shop steward councils and had their programme of action. "They are trying to mobilise workers to push for the special national congress of Cosatu and kick the current leaders out," he said.

"They say they want to claim Cosatu back."

The nine accuse Cosatu, under Dlamini’s leadership, of being meek and unquestionably dancing to the ANC’s tune.

'United front'
At a special national congress in December Numsa discussed plans to establish a new "united front" to co-ordinate workplace and community struggles, the same way the United Democratic Front did in the 1980s.

Numsa’s ultimate goal, however, would be to form a labour party by 2015.

Fawu’s Masemola said the accusations against Numsa were an attempt to "rubbish the call for Vavi’s return and turn the whole thing into politics while it’s about Cosatu issues".

He said the accusations would not force the nine unions to backtrack on their demands.

To ensure they participate in Cosatu’s decision-making meetings, Numsa has paid its monthly affiliation fee of R800 000 in full. The union had initially resolved to withhold the monthly subscription. All the nine pro-Vavi unions boycotted this week’s committee meeting, but there were "all indications" that they would be at next week Samwu spokesperson Stephen Faulkner.

Satawu’s Mahlangu slammed Vavi for questioning the disciplinary action being taken against him.

"You can’t have somebody saying I’ve been elected so I can’t be disciplined. How many people have been disciplined in Cosatu before, including the former president [Willy Madisha]? Madisha … really was a victim of circumstances. He was raising genuine issues but became a ­victim of political disagreements of the day."

Both Mahlangu and Dlamini claim Vavi is being used by the nine unions as a convenient reason to fight the Cosatu leadership for their own selfish gains – that of forming a ­workers’ party.

"They are using Vavi to be the face of their campaign," Dlamini said.

"They are destroying him. I don’t know if he is aware."

"I don’t think the eight unions that are with Numsa agree with it on every­thing. They are enjoined on the matter of the [reinstatement] of Vavi and the call for special congress for different reasons to what Numsa is saying. The unions support the ANC and are campaigning for it. That gives me hope. Soon these unions will declare they are not part of Numsa."

Pro-Dlamini unions this week sought to separate Numsa from the other eight. Those in the same camp as Numsa defended the metalworkers’ union.

"We are not the eight unions and Numsa we are nine unions who are Cosatu affiliates," said Samwu’s Faulkner.

"The strategy of those who differ with us is to isolate Numsa. The approach is to silence Numsa if you can’t push them out of Cosatu." He said, calling Numsa "enemy number one".

Jim accused Dlamini of violating the Cosatu constitution by failing to convene the special congress, which he said is the only thing that can avoid the fragmentation of the federation. "If the leaders of Cosatu behave the way they are doing, we will have to think hard about the way forward at some point."

Survival
Mahlangu said Cosatu could survive without the nine affiliates.

"The affiliates that remain are the largest portion of Cosatu. They contribute almost two-thirds of membership," he said. "These others were no longer paying their affiliation fees anyway, we know Numsa has been paying for them.

"Whether we keep them or they go we will still suffer the same results [of a wounded Cosatu]. Even in the Bible they say the branches of a tree that no longer bear fruit should be removed. It’s the same with these unions."

Masemola said despite the nine unions’ unhappiness with the Cosatu leadership they still hold "sentimental attachment" to both Cosatu and the ANC.

He said if the split did happen the strongest formation would be the one that includes Numsa because of its spirited battles for workers’ rights and they way it fought for socio­economic justice.

"There will be change in the rank and file of those unions that will remain in Cosatu. In fact, there would be a revolt."

The finance minister will cut departments’ allocations according to their cloth as one measure, and savings will have been made from underspend during the lockdown
Read more
Advertising
Continue to the category
Politics