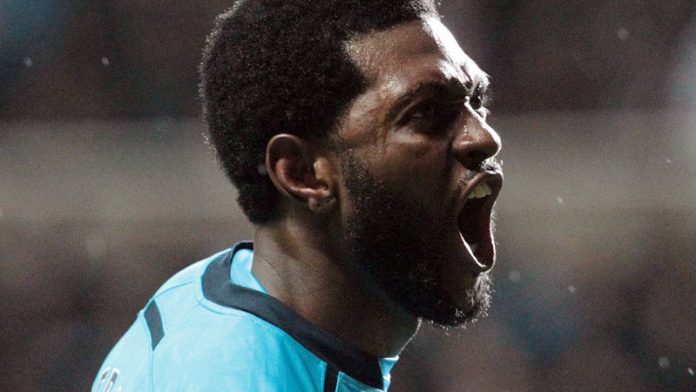 Liverpool's surge towards a first league title since 1990 continued on Wednesday when they beat Fulham 3-2 with a last-minute penalty while Arsenal's challenge took a knock after a 0-0 home draw against Manchester United.

The most open Premier League championship race for years continued on a wild and windy night across Britain, leaving Chelsea top, just seven points ahead of fifth-placed Tottenham Hotspur who chalked up a superb 4-0 win at Newcastle United.

The other match that survived the weather ended in a 1-1 draw between Stoke City and Swansea City at the Britannia Stadium, a result that left both sides mired in the equally tight battle to avoid the drop that has 11 teams in its grip.

The storms caused Manchester City's game against Sunderland at the Etihad Stadium and Everton's match at Goodison Park against Crystal Palace to be postponed because of dangerously high winds.

After drawing 1-1 at West Bromwich Albion on Tuesday, Chelsea lead the way with 57 points, one in front of Arsenal with 12 matches to play.

Manchester City are third on 54 with a game in hand on the top two, followed by Liverpool on 53 and Spurs on 50.

Most dramatic game
Everton, who also have a game in hand, are sixth on 45 points, three clear of United who have won just two of their last seven league matches.

The most dramatic game of the night was played at Craven Cottage where bottom-of-the-table Fulham, who forced a 2-2 draw at Old Trafford on Sunday, twice led against Liverpool who were heavily fancied to win following their 5-1 demolition of Arsenal on Saturday.

It was Fulham who took the lead when defender Kolo Toure, guilty of a terrible error that cost Liverpool victory at West Brom earlier this month, sliced the ball into his own net after eight minutes.

Daniel Sturridge equalised, scoring for the eighth successive match, four minutes before the break before Fulham stunned the visitors by going ahead again through Kieran Richardson.

Brendan Rodgers's side equalised for a second time when Philippe Coutinho found the net from 20 metres in the 72nd minute.

Sascha Reither then brought down Sturridge in stoppage time and skipper Steven Gerrard scored from the penalty spot.

"Gerrard's peerless in situations like that," Rodgers told reporters. "He showed brilliant composure.

"We had to show the character in our team tonight coming from behind twice. This team has not just grown technically in the way of our work but we're showing great characteristics mentally."

Weekend setbacks
Arsenal and United needed victories following their setbacks at the weekend but, despite chances at both ends, neither could find a goal.

United should have taken the lead in the second minute when former Gunner Robin van Persie, booed by the home fans every time he touched the ball, fired straight at goalkeeper Wojciech Szcz?sny after Mikel Arteta gave the ball away.

Laurent Koscielny's bullet header was then cleared off the line by United's Antonio Valencia in the second half while Arsenal should have had a penalty when Nemanja Vidi? pushed Olivier Giroud off balance with an elbow in his back.

The home fans booed Arsenal, who face tough matches against Liverpool in the FA Cup and Bayern Munich in the Champions League in the next week, off at the end.

"It's absolutely open for any of the leading teams now," said manager Arsene Wenger.

Spurs are unlikely to win the title but they crushed a poor Newcastle team to record their sixth victory from their last seven away matches.

Goal of the season
The Londoners have also won seven of the 10 league games they have played since Tim Sherwood succeeded Andre Villas-Boas as manager in December.

Emmanuel Adebayor, shunned by Villas-Boas, scored twice on Wednesday to take his tally to nine goals in 12 matches in all competitions since being recalled.

Paulinho was also on target while Nacer Chadli's 88th-minute strike that curled past Newcastle goalkeeper Tim Krul was a contender for goal of the season. – Reuters