The many lives of Julius Malema 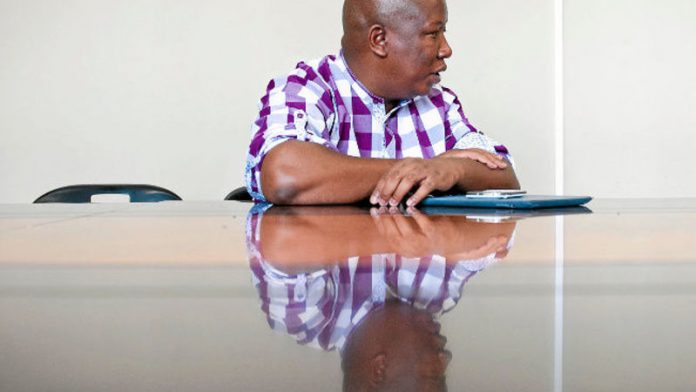 Economic Freedom Fighters (EFF) leader Julius Malema has money on his mind – or, rather, the lack thereof. When they said it was cold outside the ANC they weren’t kidding.

These days, sans Breitling or bling, Malema must sing for his supper – by delivering speech after speech to put bread on his party’s table.

"Being poor doesn't mean you can't afford anything," he said of EFF's current financial status. "You can afford a shack, you can afford a bread without a cold drink." He shrugs. "It's not a hopeless situation."

The same could be said of his own personal financial status.

Gone are the watches and the suits tailored to impress. He's not quite wearing his revolutionary makeover gear of beret and combat boots for our interview but he is keeping it real in blue jeans and a casual shirt. Does he think he can pull of this man of the people gig given his past excesses?

"But why would you want to talk about youth leader and EFF? They are not one thing," he asks with a touch of irritation. He has just outlined the EFF's policy that leaders live humble lives. I had wondered out loud how this squared up to the flashy life he led when he ANC youth league leader.

"We live according to the policies of the organisations we lead," he points out. "There was no such policy in the youth league." The irritation is gone now. This is the wiser, more patient version of the man who kicked journalists out of press conferences in his previous political life.

R16m in outstanding taxes
But his history of financial abandon isn't far away. As we settle into the video part of our interview at a venue in Braamfontein the news drops that he been provisionally sequestrated thanks to R16-million in outstanding taxes, which will effectively prevent him from becoming an MP.

"I heard the judge sequestrated me," Malema said. "I don’t know."

But his solution is simple: appeal to the highest court in the land and, if that doesn' work, he'll respect the courts and strengthen the EFF from beyond Parliament.

But the EFF are still struggling to chump up the nearly R600 000 they need to contest all provinces and national elections in May.

"What happens if people are poor and want to contest elections? They cannot be denied that right because of money," he said.

No funding
He points out that the IEC will give money to ailing parties such as Congress of the People because of their presence in Parliament. His party will receive nothing, despite their superior membership. It's a genuine contradiction in a country that has a deeply problematic party funding model.

It may take Malema's human mega-phone abilities to draw attention to the issue now that it has become one for him.

The same could be said for his sudden drop in economic status: you can count on Malema to empathise when he's facing the same problem.

And empathise with the poor he has – criss-crossing the country at a dizzying rate in something of a protest mega-tour.

"The EFF is the vanguard of the protest movement" is a phrase he repeats throughout the interview.

Police Minister Nathi Mthethwa might disagree, as would a number of actual grassroots protest movements and researchers.

Ayanda Kota of the Unemployed People's Movement has accused the EFF of parachuting into distressed communities and co-opting their causes. And academic Dr Carin Runciman, who has studied 2 000 protests over the past decade, said the EFF may be first on site, but it may not mean all that much.

"The important thing to remember with that is that, yes, they are hooking into the general grievances of people, but at the same time people in the community are aware of being used for other people's interests," she said. "But they're hoping it'll help them and open up an avenue. For a lot of the communities we speak to it seems strategic: get a member of the EFF or Malema, if you can get him there, [because] the media will hopefully follow."

Opportunism
The more serious charge from Mthethwa is that of political opportunism: the EFF is actually increasing the intensity of the service delivery protests mushrooming across the country at alarming levels – 500 in Gauteng alone in the past three months, with a quarter of those violent.

Malema fiercely denies any such allegations: "If you look at the images that are coming out of the areas where people are protesting you can see poverty, you can feel poverty with your own hand. These are genuine demands of our people."

But there is fire in his voice when he talks about the protests, which he repeatedly likens to uprisings in other parts of the world. The idea of an Arab-style revolution isn’t far away. "Twenty years into democracy we shouldn’t be talking about protests, we must talk about uprisings where society says enough is enough."

Malema is talking the language of Marxist revolution, not unlike the National Union of Metalworkers (Numsa). Rumours were rampant at one point that they might hook up. But last week the Mail & Guardian quoted Numsa as saying that the EFF liked to give the impression it was talking to them, but it wasn’t true. They had reservations about the EFF: Were they true socialists? Did they value democracy? And more importantly, what was with Malema's title of commander-in-chief?

It made Malema angry in our interview, even in his cheery purple and-white checked shirt with flowers decorating his upturned sleeves.

Numsa and the EFF
"In all the pronouncements I have made it very clear we have never spoken to Numsa, and we are not speaking to [Zwelinzima] Vavi."

The idea was clearly a repulsive one to Malema – that he should be thought of forcing himself where he was not wanted.

But there is a regret at the state of things. Numsa and the EFF are playing in the same sandbox: both broken away from the ANC, and both trying to create a united left including grass root social movements.  But the heavyweights won't play with the newcomers and Malema doesn't understand why.

"For any revolution to be sustainable and successful it will need unity of like-minded formations," he points out. "People celebrate the disunity of formations that should be united to advance the interests of the working classes. And we would like to speak to them.

"But if they don't see a need to speak to us it’s fine, we can’t impose ourselves on people who are so proud of not speaking to us."

A gentleman at heart
It doesn't take a psychologist to detect the hurt. But it's far more palpable when he talks about his old friend and predecessor at the helm of the ANC Youth League Fikile Mbalula, who stayed in the ANC despite rumours that he might join Malema by exiting the party in 2012.

"I saw Mbalula for the first time since I formed the EFF [last October] with comrades when I bumped into him in Cape Town in January. And you could see the man was uncomfortable – he was not himself, not welcoming."

Choosing his words carefully, Malema said: "It was such interactions that have made me more convinced that I should not impose myself on these guys for acceptable reasons … If they were to be seen with me they would be victimised. They would be accused of actually financing the EFF and all that.

"As a person you need to avoid crowding people's space if people feel uncomfortable with your presence."

Malema, it turns out, is a gentleman at heart: unwilling to impose himself where he was unwelcome.

His attitude towards Mbalula, or Mbaks as he still calls him, is particularly gentlemanly given the background: ?Malema staked his political career in the ANC on Mbalula making it into the top six as secretary general in Mangaung in December 2012, but was booted out beforehand, whereas Mbalula turned tail and has been trying to make amends ever since.

'All kinds of tricks'
However Malema is not entirely uncritical of Mbalula, and others he has broken with in the ANC. "Many of them do not have any other skill except political skill and if it's taken away from them then they may not be in a position to provide for their family. They are not survivors, they are not like some of us who survived through difficult times … "

There is a glint in his eye and the old rambunctious Malema makes an appearance. "You know a cat with many lives: they try everything and it keeps on rising. Today it's sequestration.

"They try with all kinds of tricks but a black cat keeps on emerging."

The people's wishes make it into the manifesto

The EFF is launching its manifesto on February 22 at the Mehlareng Stadium in Tembisa, Johannesburg, and "financing the revolution" is going to top discussions.

"The manifesto is the product of the consultation with the people," Malema says. "They have raised issues that they think need to be taken up by the organisation.

"They want a practical programme of action and policy that will also change their living conditions. We are going to prioritise those and indicate where the financing of such priorities will come from once we are in government.

Malema believes his party’s manifesto will help them to trump the ANC.

The EFF is "expecting tens of thousands" at the launch.