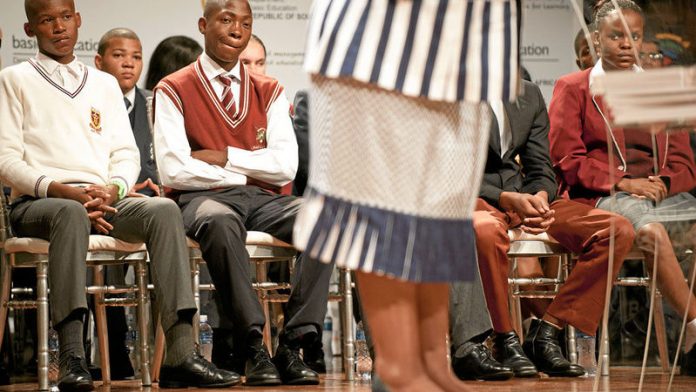 As has been the case for several years, the matric 2013 season saw many people complaining that the pass mark is too low. But a newer development is the argument we have seen this year that the pass mark for each subject should be 50%.

Right now, a basic education ministerial review is under way to investigate the appropriateness of the national senior certificate (NSC) pass requirements. Given the growing chorus of disapproval around the current requirements, the task team will be under pressure to recommend some changes.

In the meantime, I would suggest that, although 50% sounds like a nice idea on paper, it would be unwise in practice. Before I explain why, let me debunk two widespread myths that continue to fuel the public outcry about this:

• Myth 1: "The pass requirements were higher in the past." This is simply not true: the pass mark for a subject was never 50%. Not during apartheid. Not in recent years. Never.

The NSC requirements, introduced in 2008, are somewhat different from the old "senior certificate", but they are not more lenient. For example, the old senior certificate required only five subjects to be passed, and the lowest possible pass mark was 25%, which was known as a lower- grade pass.

But let us now imagine what would happen if the pass mark was suddenly raised to 50% for all six subjects.

Firstly, considerably fewer than half as many  pupils would pass matric.  Using matric data, I estimate that about 120 000 pupils would have passed matric in 2013, compared with the 440 000 who did in fact pass.  This means that less than 20% of all South African youths would successfully complete matric.

This would be totally unacceptable to all stakeholders. There would be widespread unhappiness among pupils and their parents. Schools, in the hope of achieving respectable pass rates, would force more pupils out of the system in grades 10 and 11.

With far fewer young people completing matric, there would be a major disruption to the labour market. There would also be confusion among employers because matric would mean very different things, depending on when people went to school.

The only way to avoid this extremely undesirable scenario would be to make the exam papers easier so that the knowledge previously needed to score 30% will get you 50%. This would satisfy the argument about the symbolism of 30% versus 50%, but it would really make the entire pass mark change a farce.

If the papers were made easier to accommodate the higher pass mark, many pupils would get very high marks. The NSC would therefore be compromised in its power to differentiate between high-end  pupils — making it even harder for universities to make optimal course selections.

Importantly, the perception of a low pass mark currently does not affect universities because there already is a higher-level pass category (called the bachelor pass) for university entrance. Ironically, raising the pass mark would thus actually worsen things for universities by making it harder to identify top candidates.

So, raise the pass mark substantially and you either consign many more youths to being educationally disenfranchised (by lacking any qualification), or you let standards slide, making a farce of the system and weakening the ability of the NSC to do its job.

These are the only logical consequences of this nascent proposal to raise the pass mark to 50%. The idea has wide emotive appeal, but it is completely out of touch with reality. The consequences of the proposal have clearly not been thought through by the proponents.

Of course it is important to raise expectations and encourage excellence in the school system, but the right way to do this is to focus on what actually happens in the classroom. We need to raise the fundamental quality of learning and teaching, rather than fiddle with the pass mark.

We especially need to raise aspirations and strengthen accountability for learning outcomes in primary school, so as to improve the acquisition of foundational literacy and numeracy skills. This is where the real battle for educational opportunity is won or lost.

I actually do think it could be a good idea to raise the pass requirements incrementally over the next five to 10 years. One possibility is to introduce an average mark requirement, which would require candidates to achieve an average of at least 40%, for example.

But such changes must happen together with the development of meaningful alternative educational pathways. If we raise pass requirements, there must also be meaningful opportunities for those who do not complete matric, such as a recognised grade nine certificate and better opportunities at further education and training colleges.

Sudden and substantial changes to the pass requirements will, however,  lead either to unacceptable levels of exclusion, or to a lowering of standards through easier papers. Neither of these is desirable.

Let us focus our time, energy and resources on improving the quality of education, not just a symbolic pass requirement.

Dr Stephen Taylor is an adviser in the office of the director general in the department of basic education. The views expressed here are not necessarily those of the department