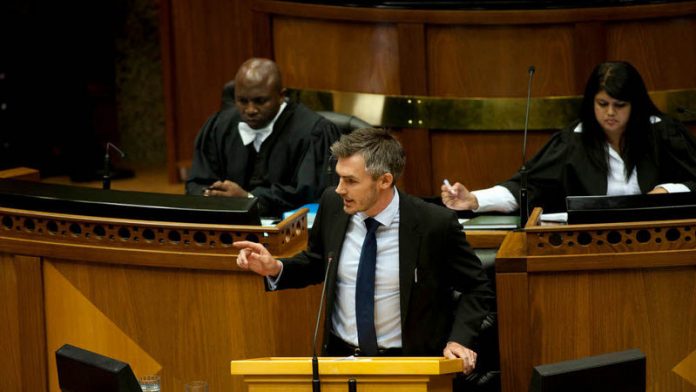 Does the ANC have a good story to tell or not?

That seemed to be the main ­question on Wednesday at the second day of Parliamentary debates, following last week's 2014 State of the Nation speech. President Jacob Zuma focused on the achievements of his administration after his first five years in office, as well as the ANC's achievements in the past 20 years of democracy.

The ANC's election phrase: "We have a good story to tell" was peppered throughout his speech, as it was in his manifesto speech in January this year in his capacity as ANC president.

He will give a second State of the Nation speech after the elections when Parliament is reconstituted, outlining his plans for the next term.

Phrase dissection
But last week's history-heavy and backward-looking address ­coalesced Wednesday's debate into discussion of the phrase, which made an appearance in nearly every speech, albeit sarcastically when it was used by anyone in the opposition.

Democratic Alliance MP Tim Harris quipped at the end of his speech that the "voters have had enough of the ANC's stories", and Independent Democrats' MP Lance Greyling outlined the energy problems facing the country, pointing out that this is "the real story South Africans should know".

Cope's Willie Madisha said the "president's good story is 90% fiction". The DA's Wilmot James dwelled on the ANC's most damning mistakes in the area of HIV and Aids, saying Zuma, who "thought a shower could wash away the virus", was not responsible for the turnaround. "This is a disgraceful story," he said.

DA MP Dianne Kohler Barnard also got in on the action. "During this speech, 25 people will be raped in our country. Before the day is over, 45 South Africans will be murdered," she said. "South Africa has had enough, South Africa deserves a much better story."

But ANC members at the mic, who got the majority of speaking time thanks to their majority in the House, fought back hard, listing story after story either painting the ANC government in a good light or the DA-led government in the Western Cape in a bad light.

Public Service and Administration Minister Lindiwe Sisulu ran through her take on the DA's failures in the Western Cape and the ANC government's successes.

Rural Development and Land Reform Minister Gugile Nkwinti, meanwhile, deviated from his prepared speech entirely, treating the House to a rundown of why he believed Zuma had achieved much on his own, instead of riding on the coat-tails of his predecessors or reversing their gains, as was claimed by the opposition taking issue with the "good story" narrative.

"It's not them, it's your government, Mr President," he repeated earnestly, looking directly at Zuma, who warmly shook his hand at the end of his 20-minute speech.

Health Minister Aaron Motsoaledi, along with Sisulu, delivered the greatest tongue-lashing to opposition parties in general, and the DA in particular.

"We never had to look at a leader from another party or organisation," said Motsoaledi, who was first on the list of speakers and got the debate off to a fiery start. He was referencing the DA's failed partnership with AgangSA leader Mamphela Ramphele.

"You have a party [that] starts [its] story with one Helen, and ends with another Helen … who is not sure if she can lead or not," said Motsoaledi, adding that Zille had tried to "hire another leader".

Sisulu also made reference to the embarrassing incident for the opposition in an even more fiery speech, calling the DA a one-person party under Zille, ­"hunting for any black face to bring you legitimacy".

Motsoaledi also took aim at other parties with leadership problems. "We never had to go to court" to choose a leader, he said.

Harris retaliated in his own speech, saying that the ANC didn't have to go to court to choose a president, but it had a leader who avoided going to court in order to be a president.

Harris reiterated that his party did not disagree that the country was in a better place in 2014 than it was in 1994, but it should have done more by now.

"We can do better than benchmark ourselves against a racist system," he said, responding to the ANC's comparison of the two eras.

To remind the house that this really was an electioneering showcase for all political parties, Freedom Front Plus leader Pieter Mulder drew on an even older story to conclude his speech, saying: "The Bible doesn't say when Jesus is returning", referencing Zuma's previous statements that the ANC will rule until Jesus returns. "It could be tomorrow, or May 7. Nobody knows."