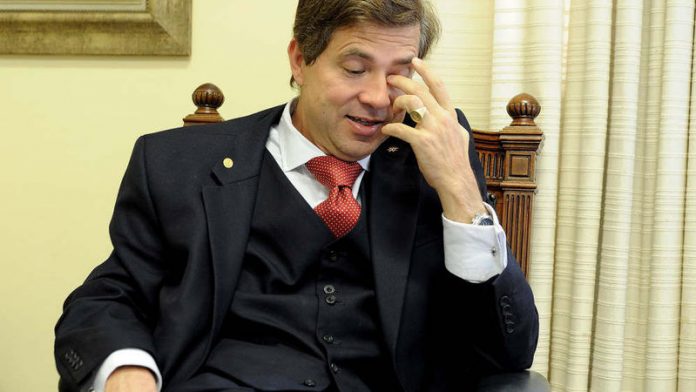 Briefing the media at Parliament on Thursday, he confirmed what he told MPs in the National Assembly the day before – that he was using marijuana, also known as dagga, medically.

However, he was not smoking it.

"I … want to clarify some press reports suggesting that I smoke cannabis [also known as] marijuana or dagga. I have lung cancer; I cannot smoke.

"Yes, I do take it, rectally. I think I don't need to expand on that notion. It doesn't affect my brain … It's an extract of the oil, the THC [TetraHydroCannabinol] oil."

In May last year, Oriani-Ambrosini announced he had been diagnosed with stage-four lung cancer.

On Thursday, he tabled his private member's Medical Innovation Bill, which seeks to make provision for innovation in medical treatment and to legalise the use of cannabinoids for medical purposes and beneficial commercial and industrial use.

'Impairment to progress'
Oriani-Ambrosini, who at times struggled to draw breath, told reporters the current law was "an impairment to progress". There were many suffering from diseases such as cancer who could benefit from access to legal marijuana and other treatments.

"This Bill wants to remove the problems created by the law, creating a space in which doctors can follow the dictates of their professional experience in cases where there is nothing else better to be given."

It further aimed to legalise treatments that would otherwise not be allowed. "It will shield doctors from liability."

The current prohibition on the medical use of marijuana was "irrational".

Oriani-Ambrosini revealed details of the treatment he had received. "I received treatment that extended my life expectancy beyond what the statistics say. I am now in the 0.01% survival rate because of doctors who administered bicarbonate of soda to me in my thoracic cavity, and did so illegally."

This treatment was given at unregistered private clinics in Europe, where payment was in cash, and administered by "top-notch university professors … who realised it was a duty of conscience to do therapy that would work better than what is otherwise available", he said.

'Fearsome monsters'
Also at the briefing, Inkatha Freedom Party leader Mangosutho Buthelezi said he had travelled a long road with Oriani-Ambrosini. "He has taken on one of the most fearsome monsters at this time and I do hope that … he will do something, not only for himself but the whole human race … with what he's started through this Bill."

Sitting next to Oriani-Ambrosini at the briefing, advocate Robin Stransham-Ford, who revealed that he too had terminal cancer, said he had been briefed to mount a constitutional challenge against the laws making cannabis illegal.

Stransham-Ford is representing the recently-formed Cancer Treatment Campaign. The campaign wants to see doctors allowed to "promote innovative and alternative treatments" for the disease.

Further, it is calling on government to "liberalise" the medical and industrial use of cannabis.

Oriani-Ambrosini said tabling the Bill to get the law changed was something he had to do. "This is my contribution to something that had to be done. I did not look for this fight … It found me." – Sapa

Do monarchies in Africa serve their people?