Kiev burns as Ukrainians rise up 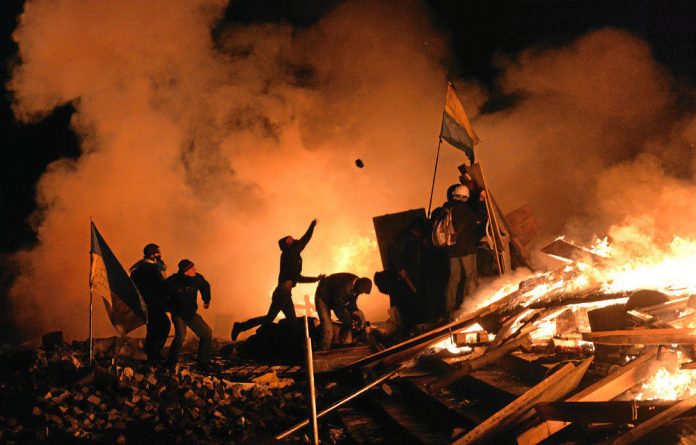 Beneath the gilded column known as Stella, which towers over Kiev's Independence Square, the charred remains of Ukraine's battlefield bore witness to the saddest, grimmest 36 hours in the young country's history.

On Tuesday morning, the public space was an encampment of tents and soup kitchens occupied mainly by youthful and peaceful protesters sick to the back teeth of the corruption, cronyism and misrule of their president.

By Wednesday afternoon, the area was occupied by ranks of interior ministry troops, special "Berkut" security forces, and regular police in full body armour. They lined up on a wasteland of burned-out buses, smouldering fires, collapsed sodden tents, almost three months of thriving protest ruthlessly reduced to shards of timber and rubble.

"This night is one that will never be forgotten in Ukraine. This will stay in the minds of people until they die," said Aleksandar (57). "Our government is slaughtering people. This is the action of a dictator."

The security forces' unexpected assault on the square, known as the Maidan, was shocking. The health ministry confirmed at least 26 deaths, 10 of them police officers — by far the worst day of bloodshed the country has seen since it gained independence from the Soviet collapse more than 20 years ago.

Burning bright
Ahead of the police lines on the edge of the square, the large headquarters of Ukraine's trade union federation was gutted and still ablaze from the day before.

"That was where the ‘Right Sector' was based," said a policeman, referring to the young nationalist radicals taking a lead in the increasingly violent campaign to topple President Viktor Yanukovych, who triggered the three-month revolt in November by ditching a trade and political pact with Europe in favour of cheap loans and gas supplies from the Kremlin's Vladimir Putin.

The move turned Yanukovych's eastern and Russian-speaking power base against Kiev and the pro-European west of the country in a confrontation that has lasted almost three months and has now shifted menacingly.

In the wake of Ukraine's Black Tuesday, the country is on the brink, with a recalcitrant president, seemingly egged on by Moscow, digging in his heels and unleashing massive force while the opposition is becoming more radicalised towards armed resistance.

"The people either have to rise up, or if there is a big crackdown, they will go underground as partisans," said Andrei Poznyakov (23).

Failed talks
Whether the violence that left more than two dozen dead and hundreds wounded will shock the two sides into compromise or spawn riskier polarisation is not clear. Talks between Yanukovych and opposition leaders were an utter failure, with both sides angrily blaming the other.

"Blood is shed on the streets," said Vitali Klitschko, the boxing champion who is one of the troika of opposition leaders. "The main reason for this is actions of the authorities. People today demand Yanukovych and his government resign. The sooner this happens, the less blood is shed." 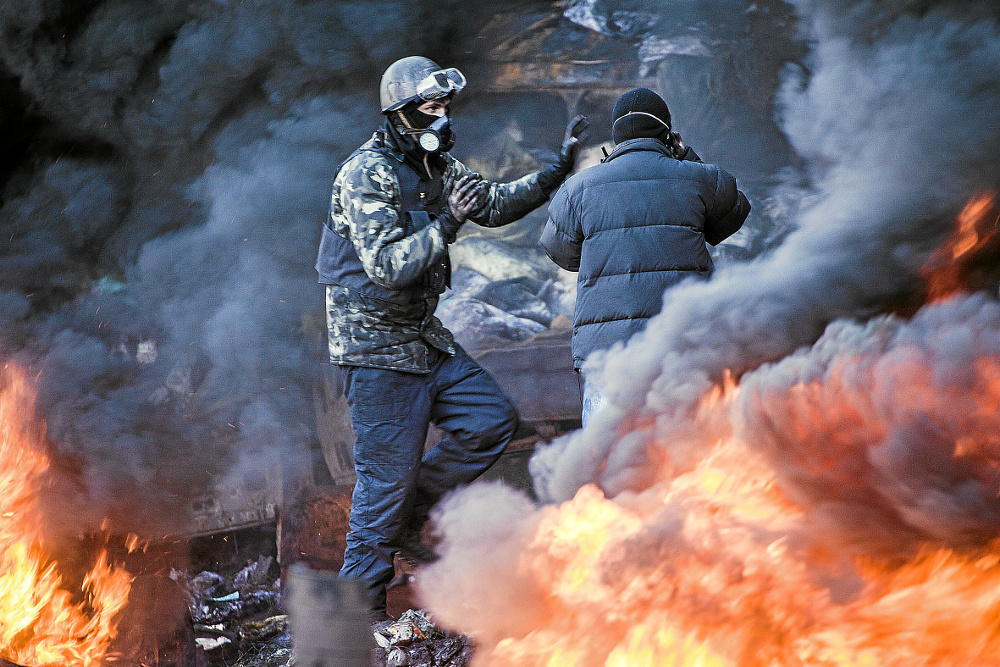 The government countered that the opposition leaders had blood on their hands. "Opposition called on radical protesters to blockade the Ukrainian Parliament," said the foreign ministry. "The opposition has assumed full responsibility for the unprecedented outbreak of violence and lawlessness."

As the riot police took control of a chunk of the square, several thousand remaining protesters sought to keep a ring of fire ablaze around their perimeter, to keep the security forces out. Svetlana (27) poured petrol into glass bottles, part of a mini-Molotov cocktail factory building up its armoury. "I am not for violence: I am for peaceful protest. But what choice do we have when we are being shot at?"

Some speculated that hot tempers would be calmed by some form of international intervention, from Moscow, from Washington, from Berlin, from Brussels. But events since November have tended to underline Russian resolve not to "lose" Ukraine and highlight Western disarray.

Ongoing sit-in
The protesters still command most of the square and the city's main post office. On Wednesday night speakers roared themselves into a frenzy on the stage at the square's centre. Ukrainian Orthodox clergy intoned prayers for the nation. Singers with guitars belted out rousing patriotic folk songs. And everyone feared another attempt by Yanukovych's shock troops to clear the entire arena amid much more bloodshed.

Natalyia, a 66-year-old grandmother, braced herself against that eventuality. Clutching a handbag in one hand, she piled pavement cobblestones with the other to hurl across the front line, at the police uniforms and armour. "Our struggle is for Ukraine to be democratic, for courts to be courts, for Parliament to be Parliament, for a president to be a president. That's all."

There were signs of fracturing within the Yanukovych camp. The authorities in the western city of Lviv pledged maximum aid to the Kiev protesters while the government erected multiple blocks and checkpoints on roads leading to the capital to try to keep people away.

There were also reports that the president had fired the head of the armed forces, suggesting dissent within the security elite.

Mykola Polishchuk, a former health minister who is Kiev's chief neurosurgeon, worked through the night tending to the wounded at a city-centre cathedral turned into a makeshift medical centre.

Sticks and stones
"Most of the injured had head injuries, hit with stones and bricks. There were injuries from live ammunition as well," said Polishchuk.

"When we called for ambulances, the riot police prevented them from coming close to the hospital and took the ambulances to treat their own men. One ambulance was destroyed by [pro-government thugs] with baseball bats. About 30 medical vehicles had their tyres slashed even though they were filled with injured people trying to get to the hospitals."

Artem Melnichuk (19) sat next to his father by a campfire. "Last night was like a war. At first I was a little scared. But then the adrenaline kicks in and you forget who you are, you just do it. There is no choice any more but to be brave and to fight." — ©  Guardian News & Media 2014