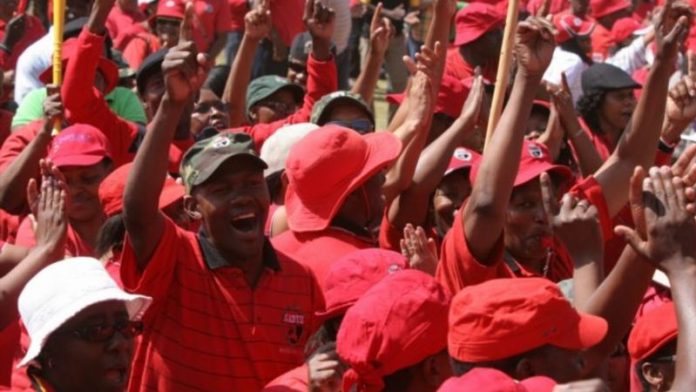 In a surprise attack that caught the building's security off-guard, the invading forces managed to take occupation of the department's second-highest office – that of the director general.

This was because – even more alarmingly – it was the director general himself, Bobby Soobrayan, who spearheaded the invasion. Closer inspection suggested Soobrayan might have learned a thing or two from Agent 007 or Jason Bourne, in that he appeared to have pulled off this successful attack, invasion and occupation single-handedly.

At any rate, these were among the lurid impressions the South African Democratic Teachers' Union (Sadtu) managed to create in a press statement it released on Monday morning.

This invited media to an "urgent" briefing about the "provocative … invasion of the DBE offices by Bobby Soobrayan". It also strongly hinted that Soobrayan was perhaps [and alas] not really James Bond or Jason Bourne: although it was he who did the invading, this was "part of a campaign to disrupt education".

So he had help – enemy forces that Soobrayan led, therefore? But who were they? And was President Jacob Zuma told about the coup d'etat in national education governance? Sadtu didn't cast light on any of this.

But there was another way of reading its unusual way of describing a bog-standard state bureaucrat's arrival at the office on a Monday morning.

This was that the country's largest teacher union had finally lost the plot (to stick with its current preference for military metaphors concerning conspiracies, enemies and invasions). Or, more plainly, that it had gone bonkers and lost its marbles altogether.

"Marbles" gets us closer to understanding what actually led to Sadtu's ludicrous press release. Unfortunately, it also provides a way of reading this week's genuinely sinister development: Sadtu's threat on Tuesday to call its members out on a national strike over – we are expected to believe – a 0.5% pay increase.

First, Sadtu appeared unaware when it issued the Monday release that there was nothing illegitimate at all about Soobrayan's arrival at work.

Yes, he had been on "special leave" since last year, pending the outcome of a disciplinary hearing on charges that Sadtu itself spent about a year pressuring Basic Education Minister Angie Motshekga into bringing against him.

But by Monday, the hearing, chaired by Judge Willem van der Merwe, had already concluded by clearing Soobrayan – a little detail that it was surprising Sadtu seemed to have missed because, at its insistence, its own legal representatives sat in on the disciplinary hearing as observers.

Perhaps those representing Sadtu took the same breezy approach the union does regarding its members' working hours and presence in the classroom? Or maybe Sadtu developed its well-known selective deafness on being told anything it doesn't want to hear?

The point is surely that, concerning Soobrayan's disciplinary case, Sadtu got everything it wanted – except the verdict.

The two charges related to increased payments to matric markers that were never implemented and allegedly unauthorised expenditure of about R48 000.

These were charges Sadtu spent a militant year demanding be independently adjudicated in a hearing with its own lawyers present. That is precisely what happened – in a process that the Congress of South African Students (Cosas) itself applauded for its transparency.

In an exceptionally unusual political move, Cosas in the same statement also denounced Sadtu on Thursday for its strike threat. The congress expressed its "dismay and disgust", and lambasted the union for "seeking to impose [its] thinking on everyone in a bullying way".

This is spot-on. By Tuesday, when Sadtu held its press briefing, the union appeared to have caught up with what Judge van der Merwe had actually ruled and so toned down the "invasion" rhetoric dramatically.

But it upped the war talk in another way, both by dismissing (on obscure grounds) the hearing's exoneration of Soobrayan, and saying it would call its members out of classrooms over the department's alleged failure to implement a 0.5% pay increase.

That amount is part of an agreement to a 1.5% increase for all public-sector employees reached some time ago. The department has so far only implemented 1%, Sadtu said.

If it beggars belief that the union would consider this adequate grounds for bringing schooling to a halt, so too should it ignite profound alarm that Sadtu is dismissing – on Soobrayan – a 26-page report penned by a judge and replete with case law and legal precedent in support of his verdict.

Here is where one strongly suspects the loss of those school-playground marbles comes in. Frustrated now in its year-long attempt to get Soobrayan fired, Sadtu throws its marbles along with all its other toys out of the cot.

None of this is to suggest that Soobrayan has nothing left for which to answer and still be held accountable (he does). But that is not the tack Sadtu took anyway (it should have).

Now it is Motshekga who will need to show a hardness of political muscle she has not always displayed and show Sadtu the door.

Otherwise, government might as well just go the whole hog and hand the entire ministry of education over to this currently power-crazed union – a governance arrangement that all too often appears to be the undeclared status quo anyway.