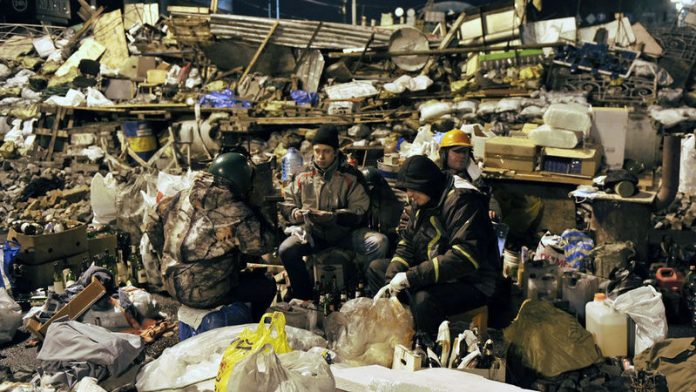 Ukraine's presidency said on Friday a deal was reached at all-night talks on resolving the country's crisis after 75 people were killed in two days of the worst violence since Soviet times.

But the opposition did not immediately confirm an agreement had been reached and diplomatic sources described the talks brokered by three European Union ministers as "very difficult".

Earlier on Friday Talks between opposition leaders and the embattled Ukrainian president continued as a shaky peace reigned in the protest camps in downtown Kiev.

President Viktor Yanukovych, who was still engaged in talks with opposition leaders and foreign officials, was "going to make concessions in order to restore peace", Interfax Ukraine quoted his spokesperson Anna German as saying at the time.

Support for the president appeared to be weakening, as reports said the army's deputy chief of staff, Yury Dumansky, was resigning in "disagreement with the politics of pulling the armed forces into an internal civil conflict". Late on Thursday, the Ukrainian Parliament passed a measure that would prohibit an "anti-terrorist operation" threatened by Yanukovych to restore order, and called for all interior ministry troops to return to their bases.

But it was unclear how binding the move would be, as the mechanism for carrying it out would have to be developed by the president's office and the interior ministry.

On Friday morning, several thousand protesters milled around Independence Square, known as the Maidan, which earlier this week was rocked by street battles between protesters and police that have left at least 101 dead.

No visible police forces remained on the square, and volunteers walked freely to the protest camps to donate food and other packages.

Corruption in Ukraine
Yanukovych and the opposition protesters are locked in a battle over the identity of Ukraine, a nation of 46-million that has divided loyalties between Russia and the West. Parts of the country – mostly in its western cities – are in open revolt against Yanukovych's central government, while many in eastern Ukraine back the president and favour strong ties with Russia, their former Soviet ruler.

Protesters across the country are also upset over corruption in Ukraine, the lack of democratic rights and the country's ailing economy, which just barely avoided bankruptcy with a $15-billion aid infusion from Russia.

In Brussels, the 28-nation European Union decided in an emergency meeting on Thursday to impose sanctions against those behind the violence in Ukraine, including a travel ban and an asset freeze against some government officials.

The White House said US Vice-President Joe Biden spoke by telephone with Yanukovych on Thursday afternoon and made clear that the US is prepared to sanction those officials responsible for the violence.

Despite the violence, defiant protesters seemed determined to continue their push for Yanukovych's resignation and early presidential and parliamentary elections.

"The price of freedom is too high. But Ukrainians are paying it," Viktor Danilyuk, a 30-year-old protester, said on Thursday. "We have no choice. The government isn't hearing us."

One of the wounded, volunteer medic Olesya Zhukovskaya, sent out a brief Twitter message – "I'm dying" – after she was shot in the neck. Dr Oleh Musiy, the medical co-ordinator for the protesters, said she was in serious condition after undergoing surgery.

Musiy told the Associated Press (AP) that at least 70 protesters were killed on Thursday and over 500 were wounded in the clashes.

There was no way to immediately verify any of the death tolls.

"For now, there are no results," said an opposition leader, Vitali Klitschko.

Prevent further bloodshed
Video footage on Ukrainian television showed shocking scenes on Thursday of protesters being cut down by gunfire, lying on the pavement as comrades rushed to their aid.

Protesters were also seen leading police officers, their hands held high, around the sprawling protest camp in central Kiev. The interior ministry said 67 police were captured in all. An opposition lawmaker said they were being held in Kiev's occupied city hall.

German Chancellor Angela Merkel spoke with Russia's President Vladimir Putin and President Barack Obama about the crisis on Thursday evening. All three leaders agreed that a political solution needs to be found as soon as possible to prevent further bloodshed.

Saying the US was outraged by the violence, Obama urged Yanukovych in a statement to withdraw his forces from downtown Kiev immediately. He also said Ukraine should respect the right of protest and that protesters must be peaceful.

The US state department on Thursday issued a statement warning citizens "to defer all non-essential travel to Ukraine due to the ongoing political unrest".

The Russian leader called for an immediate end to bloodshed and for steps "to stabilise the situation and stop extremist and terrorist actions". He also sent former Russian ombudsman Vladimir Lukin to Ukraine to act as a mediator.

Russia appeared increasingly frustrated with Yanukovych's inability to find a way out of the crisis.

Prime Minister Dmitry Medvedev said Russia will "try to do our best" to fulfill its financial obligations to Ukraine, but indicated Moscow would hold back on further bailout instalments until the crisis is resolved.

"We need partners that are in good shape and a Ukrainian government that is legitimate and effective," he said. – Sapa-AP