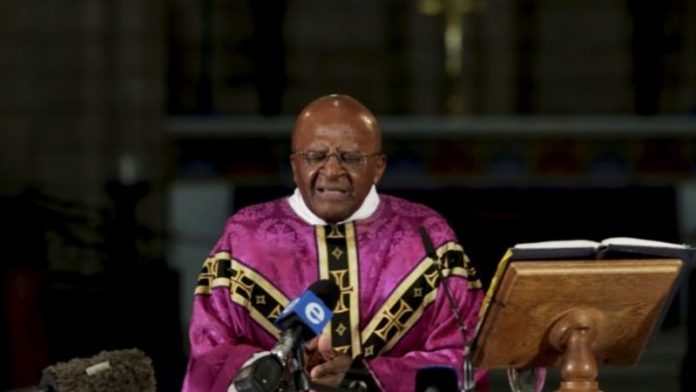 "To strengthen criminal sanctions against those who commit sexual acts with children, regardless of gender or sexual orientation," Tutu said in a statement released by the Desmond and Leah Tutu Legacy Foundation.

Tutu said tightening these areas of the law would provide children and families more protection than criminalising "acts of love between consenting adults".

He said he spoke to President Yoweri Museveni last month and the president gave him his word that he would not let the Anti-Homosexuality Bill become law in Uganda. Tutu said he was "very disheartened" to hear Museveni was re-considering his position.

Controversial
Last week, Agence France-Presse (AFP) reported that Museveni said he would sign the controversial Bill into law. It would see homosexuals jailed for life, despite international pressure and warnings from Washington that bilateral relations would be harmed.

"Exhibitionism of homosexual behaviour must be punished because, in this part of the world, it is forbidden to publicly exhibit any sexual conduct [kissing, etc] even for heterosexuals," the president said in his statement.

"If I kissed my wife of 41 years in public, I would lose elections in Uganda," said Museveni.

AFP reported that Museveni said he was initially opposed to the anti-gay law because he thought "it was wrong to punish somebody on account of being born abnormal" – much in the same way that he would not punish an albino or a woman without breasts.

However, he said that advice from scientists in Uganda's department of genetics, school of medicine and the ministry of health showed a "unanimous conclusion … that homosexuality, contrary to my earlier thinking, was behavioural and not genetic" and therefore should be punished.

Tolerance
The anti-gay Bill passed easily through the Ugandan Parliament in December after its architects agreed to drop a death penalty clause. According to the law repeat homosexuals should be jailed for life. It outlaws the promotion of homosexuality and requires people to denounce gays.

Tutu said history was littered with attempts to legislate against love or marriage across class, caste and race, but that there was no scientific basis or genetic rationale for love.

"There is only the grace of God. There is no scientific justification for prejudice and discrimination, ever," Tutu said.

"Human beings are very diverse … Our diversity requires of us to be tolerant and compassionate and respectful of each other."