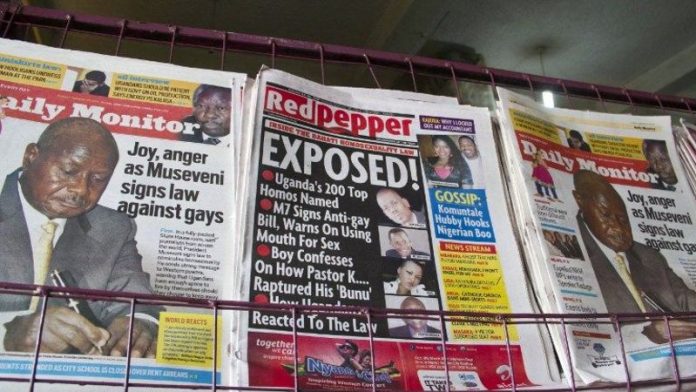 A Ugandan newspaper published a list on Tuesday of what it called the country's "200 top" homosexuals, outing some Ugandans who previously had not identified themselves as gay one day after the president enacted a harsh anti-gay law.

US Secretary of State John Kerry said Monday's signing of the Bill by President Yoweri Museveni marked "a tragic day for Uganda and for all who care about the cause of human rights" and warned that Washington could cut aid to the government of the East African nation.

"Now that this law has been enacted, we are beginning an internal review of our relationship with the Government of Uganda to ensure that all dimensions of our engagement, including assistance programmes, uphold our anti-discrimination policies and principles and reflect our values," Kerry said in a statement.

The Red Pepper tabloid published the names – and some pictures – of alleged homosexuals in a front-page story under the headline: "EXPOSED!"

The list included prominent Ugandan gay activists such as Pepe Julian Onziema, who has repeatedly warned that Uganda's new anti-gay law could spark violence against homosexuals.

A popular Ugandan hip-hop star and a Catholic priest are also on the list.

Danger
Few Ugandans identify themselves publicly as gay, and the tabloid's publication of alleged homosexuals recalled a similar list published in 2011 by a now-defunct tabloid that called for the execution of gays.

A Ugandan judge later condemned the outing of homosexuals in a country where gays face severe discrimination, saying it amounted to an invasion of privacy.

A prominent Ugandan gay activist, David Kato, was killed after that list came out, and activists said at the time that they believed he was targeted because of his work promoting gay rights in Uganda.

"The media witch hunt is back," tweeted Jacqueline Kasha, a well-known Ugandan lesbian activist who is among those listed in the Red Pepper story.

Uganda's new-anti-gay law punishes gay sex with up to life in jail.

The Bill originally proposed the death penalty for "aggravated homosexuality", defined as repeated gay sex between consenting adults and acts involving a minor, a disabled person or where one partner is infected with HIV.

First-time offenders also face life in jail, contrary to an earlier version of the Bill that mentioned a 14-year jail term.

'Conspiracy'
The new law also creates the offences of "conspiracy to commit homosexuality" as well as "aiding and abetting homosexuality", both of which are punishable with a seven-year jail term.

In signing the Bill, Museveni said the measure is needed because the West is promoting homosexuality in Africa, rejecting international criticism of the law as interference in Uganda's internal affairs.

Museveni accused "arrogant and careless Western groups" of trying to recruit Ugandan children into homosexuality, but he did not name these purported groups.

Ugandan police spokesperson Patrick Onyango said on Tuesday that no homosexuals have been arrested since Museveni signed the Bill but that at least two had been taken into custody since lawmakers passed the Bill last December.

Onziema, the gay activist, said he had counted up to six arrests and said that more than a dozen Ugandan homosexuals had fled the country since December over safety concerns.

Homosexuality has long been criminalised in Uganda under a colonial-era law that outlawed sex acts "against the order of nature".

Challenge
Some Ugandan lawyers and activists have said they will challenge the law in court as unconstitutional and impossible to implement.

"The enactment of the anti-homosexuality Bill has only emboldened the … population in their rejection of anybody perceived to be gay or even friendly to gays," he said.

The Ugandan law – which came just over a month after Nigeria passed a similar measure against gays – has been condemned around the world, although it is widely popular among Ugandans.

UN high commissioner for human rights Navi Pillay warned that the law would institutionalise discrimination and could encourage harassment and violence against gays. – Sapa-AP