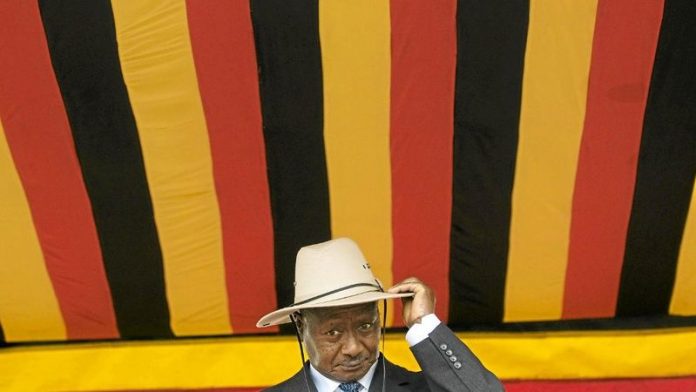 Uganda's President Yoweri Museveni initialled the Bill on Monday, drawing immediate criticism from Western donors, including the United States. Within hours, Norway and Denmark said they were holding back aid. Austria said it would review assistance.

Reflecting the gap between the policies of Western donors and some African attitudes, a Ugandan tabloid's frontpage carried the banner headline "Exposed" and threatened to out 200 allegedly known homosexuals, an act activists feared marked a new pogrom against the gay community.

"I'm really here to discuss the economy and growth opportunities, but that will be overshadowed, unfortunately, because they have taken this decision," Borg told Swedish news Agency TT, referring to the Bill on homosexuality.

"It represents a financial risk for Uganda to get this type of reputation," said Borg, who was in Uganda on Monday and Tuesday, and met gay activists the same day the law was signed.

The new Bill strengthens existing punishments for anyone caught having gay sex, imposing jail terms of up to life for "aggravated homosexuality" – including sex with a minor or while HIV positive. It outlaws lesbianism for the first time and makes it a crime to help individuals engage in homosexual acts.

Many culturally conservative sub-Saharan African governments outlaw homosexuality, a point of friction with the many Western donors that support their budgets.

US Secretary of State John Kerry said the new legislation "complicates a valued relationship", adding Washington would review ties with veteran leader Museveni and his government.

Museveni may though be betting that such warnings are just rhetoric, analysts said. Uganda is a Western ally in the fight against al-Qaeda-linked militants in Somalia, putting troops into a battle the West has little stomach for.

He may also be counting on future oil production which could start in 2016 and help ease his nation's dependency on aid.

Surge in house raids
Gay rights campaigners report a surge in house raids, violence and harassment against homosexuals since Parliament passed the Bill in December. Many gays in the capital, Kampala, hid behind locked doors for a second day on Tuesday, they said.

Homosexuality is taboo in almost all African countries and illegal in 37 – including Uganda, where rights groups say gay people have long risked jail. Fear of violence, imprisonment and loss of jobs means few gays in Africa come out.

Uganda's leading tabloid Red Pepper printed pictures of 10 suspected homosexuals and a list of several dozen names with personal details about their work places and families.

"They are exposing people at a very dangerous time," said Julian Onziema Pepe, a spokesperson for Sexual Minorities Uganda (SMUG).

The Red Pepper item revived bitter memories of a local newspaper's 2010 campaign to publish photographs of suspected gays alongside the banner: "Hang them". Uganda's High Court intervened, gagging the Rolling Stone publication but activists worried the new Bill would clear the way for similar witch-hunts.

Gay activist Clare Byarugaba said five people were in hiding in her office, asking to be moved to safe houses. "Museveni has basically given the leeway for people … to persecute each other, and it's just going to get worse," Byarugaba said. – Reuters