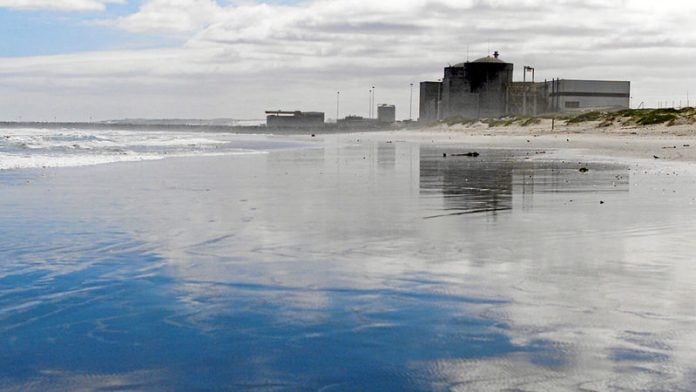 Indications of policy confusion at the highest levels of the government were reinforced this week when the budget failed to build on President Jacob Zuma’s State of the Nation pronouncement that “we expect to conclude the procurement of 9 600MW of nuclear energy”.

The cost of 9 600MW of nuclear power has been estimated at anything between R400-billion and more than R1-trillion, and would dwarf any other tender in South Africa’s history.

In contrast with Zuma’s definitive pronouncement for the coming year, Finance Minister Pravin Gordhan did not mention nuclear at all in his budget speech. He mentioned renewables four times, and shale gas exploration once.

Even the energy department, in the estimates of national expenditure that accompany the budget, did not commit to any looming procurement decisions.

Treasury spokesperson Jabulani Sikhakhane downplayed the omission, explaining that the long lead time for the construction of nuclear power pushes its financial impact beyond the three-year window period of the current budget.

But Anton Eberhard, professor at the University of Cape Town’s Graduate School of Business, said that, “given our fiscally constrained situation, it is highly unlikely that [the] national treasury will allocate any funds for nuclear power”.

“Eskom is also not in a position to finance nuclear power; its balance sheet is stressed as a result of funding Medupi and Kusile and it will not be able to raise enough debt to finance a nuclear power plant.”

President at the helm
Zuma chairs the national nuclear energy executive coordinating committee, which brings together the departments with a direct hand in the implementation of the country’s nuclear energy plans.

Though the National Planning Commission and the treasury are believed to have reservations about the high costs of nuclear energy, the departments of energy, public enterprises, trade and industry and others are broadly in favour.

Perceived pluses include guaranteed energy security, the potential to develop a fully fledged local nuclear industry, and the kudos that comes with being a global nuclear player.

But the huge sums involved are believed to be one of the reasons why a major policy clash erupted in April last year between the planning commission and the energy department.

Nuclear costly
The commission, on which Eberhard sits, published a study that suggested nuclear was costlier than originally anticipated, and could be delayed for years while base load alternatives such as shale gas and imported hydropower were explored.

The energy department initially dismissed the study as “back of a cigarette packet energy modelling” but then released a draft update to the Integrated Resource Plan (IRP)in November that appeared to agree with the commission’s findings.

The draft plan states that, if electricity demand is lower than projected, or nuclear prices are higher than those assumed in the model, then less or no nuclear power will be required.

The energy department is weighing comments from the public and from other government departments, before the updated plan is finalised and approved by the Cabinet.

The 9 600MW figure given by Zuma is the policy position taken in the country’s now outdated electricity road map, the IRP2010.

Zuma did not acknowledge the updated assumptions contained in the proposed draft revision of the IRP.

Ready to proceed
Rob Adam, the president of the Nuclear Industry Association of South Africa, refused to read too much into the silence on nuclear in the budget speech. “All the indications are that government is ready to proceed with procurement, it’s just a question of when.”

Aside from Zuma’s speech, there are additional signals that a nuclear decision is on its way. Energy Minister Ben Martins told journalists in Johannesburg two weeks ago that “a decision” on nuclear would be taken “in the next couple of months”.

The energy department has in the past six months commissioned a study into the costs of nuclear power, visited nuclear facilities belonging to all potential international nuclear vendors, and last week invited companies to bid to advise it on the economic impacts of nuclear localisation.

This flurry of activity is partly reflected in the threefold increase in the department’s consultancy fees budget over the past two years, from R2.74-million in 2012-2013 to R9.74-million in 2014-2015.

“In preparation for the new nuclear build programme and in order to learn from international experience on nuclear procurement, spending on consultants increased significantly,” the department explained.

Although it is not clear what will be decided, there are three major decisions for the government to make.

Can we afford it?
The department’s nuclear costs study is understood to be complete, but the findings have not been made public.

Eberhard believes that the best data on nuclear costs come from actual nuclear contracts. He pointed out that the updated IRP assumes a nuclear investment cost of $5 800/kW (R62 500). It also states that if costs are higher than $6 500/kW (R73 270) of installed capacity then other electricity supply options become more competitive.

For example, the most recent contract awarded to Russian firm Rosatom – believed to be a frontrunner for South Africa’s nuclear build – is for two reactors in Hungary, costing $7 031/kW (R75 762).

Meanwhile, the United Kingdom has committed to an investment cost of $8 150/kW (R87 825) when it signed with a French-Chinese consortium to build reactors at Hinkley Point. The same firms involved in the UK are eyeing the South African nuclear contract.

Who will fund it?

Given the massive sums of money that would need to be raised or guaranteed up front, much rests on the ownership model of the nuclear plants.

Options include the build, own, operate and transfer model, by which ownership of a plant is transferred to the procuring country or utility at a specified time, or ownership by a national utility such as Eskom.

A public-private partnership with vendor-assisted financing is another possible option.

Many of these options would rely on government guarantees of some form, however, which would ultimately be repaid by electricity tariffs.

How do we procure it?

A flurry of reports in November last year, emanating mainly from the Russian state-owned media, suggested that South Africa and Russia were on the cusp of signing a country-to-country nuclear deal.

Without a competitive process, South Africa might not get the best deal and, because of their opacity, country-to-country deals carry the potential for grand corruption.

Said Eberhard: “A transparent nuclear energy procurement process will reveal actual prices and we’ll be able to see whether it’s affordable or not.”

Adam, speaking at a nuclear event last week, said that the arms deal had taught South Africa that “you can’t get away with a country-to-country deal”. – Additional reporting by Lynley Donnelly