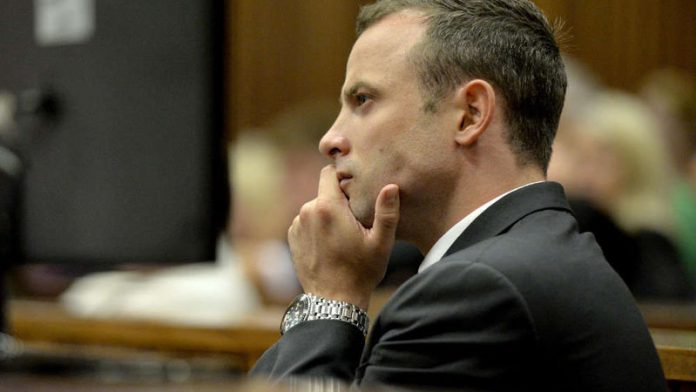 The first witness in Paralympian Oscar Pistorius's trial says she heard a woman's "blood-curdling" screams coming from his house, setting the tone for the state's bid to show he murdered Reeva Steenkamp after a domestic row.

Michelle Burger took to the stand on Monday shortly after Pistorius told the court he was pleading not guilty to the charge of premeditated murder and a string of lesser crimes in contravention of the Firearms Control Act.

In a submission read by his attorney, Pistorius insisted he believed he was protecting himself and Steenkamp from an intruder when he fired four shots into a locked toilet door in his home on Valentine's Day last year.

It was "unfair and incorrect" to say they had argued earlier that night, he added.

The state then called Burger, an academic at the University of Pretoria, who lives less than 200 metres from Pistorius's home and said she was woken up at 3am by a woman's escalating screams, followed by those of a man also crying for help. "She called for help. She screamed terribly and shouted for help. Then I heard a man also call for help. He called for help three times."

Robbery in progress
Burger, who testified mostly in Afrikaans, said she believed she was listening to a robbery in progress. Her husband called security guards and asked them to investigate.

"Then I heard her screams again," Burger said, under questioning from state prosecutor Gerrie Nel. "It was like a climax. I heard her anxiety. She was very scared.

"It was very traumatic for me. You could hear that it was blood-curdling screams."

Then came the shots, with a pause between the first and second shot, rapidly followed by two more. "It was bang … bang, bang, bang," she said, adding that after the shots the screams faded.

Burger was cross-examined aggressively by Pistorius's advocate Barry Roux, who suggested her recollection was confused.

At one point, Roux put it to Burger that when Pistorius became anxious his voice rose as high as that of a woman, and, given the 177-metre distance between their homes in adjoining security estates, it was possible she failed to tell the difference.

Burger was firm however that although she also heard a man scream, it was the "fear from her [Steenkamp's] voice that startled" her.

Roux suggested that Burger had adapted her recollection of events that night to prejudice the disabled athlete, after she listened to his submissions during his bail hearing last year.

Roux questioned why Burger did not hear Pistorius breaking down the locked door with a cricket bat after the shooting. "You come from an attitude … when you heard Mr Pistorius's version at the bail application you immediately decided it cannot be true.

"You decided if he said Reeva was not screaming, he was lying. In your view, he cannot be telling the truth."

But Burger insisted that she could not understand Pistorius failed to hear the woman's cries that woke her. Roux retorted: "What you believed … was a woman screaming."

State prosecutor Gerrie Nel objected on more than one occasion and asked for the witness to be treated fairly.

Most of the first day of proceedings was broadcast live on television, but Burger's face was not shown on air, nor were press photographers allowed to take pictures of her in court.

Scrum
Nel suggested this could also be the case for other state witnesses. Outside court though, a scrum of foreign and local media waited to capture images of Pistorius, his defence team and family, and Steenkamp's mother June.

Pistorius, dressed in a black suit and tie, appeared sombre but calm as he listened to proceedings in court on Monday, compared to the bail hearing last year when he openly cried. He was supported by his siblings and uncle. The family sat at a distance from Steenkamp's mother June.

The trial will resume at 9.30am on Tuesday, with Roux returning to his cross examination of Burger, who is one of about 107 witnesses expected to testify in the case.

Earlier, Nel had told the court that since there were no eye witnesses to the event, the state would rely on circumstantial and forensic evidence to convict the 27-year-old athlete nicknamed Blade Runner.

"There were only two people in the house, there were no eye witnesses," Nel said. "The state's case is based on circumstantial evidence … and on what the neighbours heard … and lead ballistic and forensic evidence."

It remains unclear whether or not Pistorius will take the stand. – Sapa

João ‘Jan’ Rodrigues’ application for a stay of prosecution has been dismissed. He will stand trial for the 1971 murder of activist Ahmed Timol
Read more
National

João Rodrigues, who is accused of murdering anti-apartheid activist Ahmed Timol in police custody in 1971, will stand trial in 2019
Read more
Advertising
Continue to the category
Politics