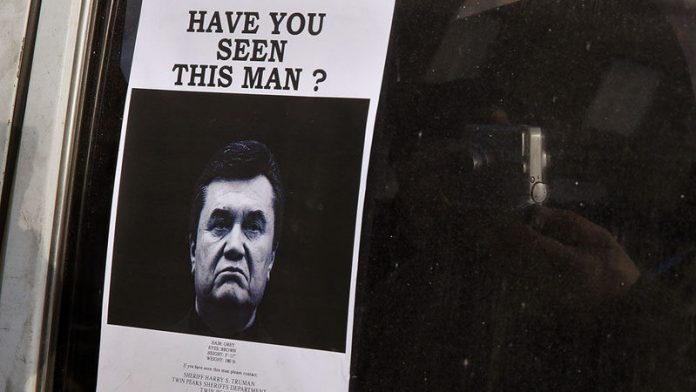 In a legal filing published in the European Union's Official Journal, the EU said that "all funds and economic resources belonging to, owned, held or controlled" by the people listed was now frozen within the 28-nation union.

The announcement follows a decision taken last month by EU foreign ministers in response to the collapse of the Ukrainian government and Yanukovich's flight into exile following a crackdown on protesters in Kiev in which scores were killed.

In its filing, the EU said Yanukovich's assets were being frozen "in connection with the embezzlement of Ukrainian state funds and their illegal transfer outside Ukraine".

Among the other prominent names on the sanctions list are Viktor Pshonka, Ukraine's former prosecutor general; Oleksandr Yakymenko, the former head of the security service; and Olena Lukash, the former minister of justice.

The sons of Yanukovich and Azarov were also on the list.

Yatseniuk was due to meet EU leaders in Brussels on Thursday to discuss the next steps to help Ukraine and its struggling economy get back on its feet.

EU weighs Russia sanctions
Meanwhile, EU leaders were set to warn but not sanction Russia on Thursday over its military intervention in Ukraine after Moscow rebuffed Western diplomatic efforts to persuade it to pull forces in Crimea back to their bases.

Russia's Foreign Minister Sergei Lavrov refused to meet his new Ukrainian counterpart or to launch a "contact group" to seek a solution to the crisis at talks in Paris on Wednesday despite intensive cajoling by US Secretary of State John Kerry. The two men will meet again in Rome on Thursday.

Tension remained high in Ukraine's southern Crimea region, where a senior United Nations envoy was surrounded by a pro-Russian crowd, threatened and forced to get back on his plane and leave the country.

An emergency EU summit in Brussels is unlikely to adopt more than symbolic measures against Russia, Europe's biggest gas supplier, because neither industrial powerhouse Germany or financial centre Britain are keen to start down that road.

The United States has said it is ready to impose sanctions such as visa bans, asset freezes on individual Russian officials and restrictions on business ties within days rather than weeks.

The European Commission announced an aid package of up to €11-billion for Ukraine in the next couple of years provided it reaches an agreement with the International Monetary Fund, entailing painful reforms like ending gas subsidies.

Diplomats said that at most, the 28-nation EU would condemn Russia's so far bloodless seizure of Ukraine's Black Sea province and suspend talks with Moscow on visa liberalisation and economic cooperation, while threatening further measures.

But they will hold back from further reaching steps both in hopes of a diplomatic breakthrough to ease tensions in Ukraine and out of fear of a tit-for-tat trade war with Russia, a major economic partner of Europe.

France has a deal to sell warships to Russia that it is so far not prepared to cancel, London's banks have profited from facilitating Russian investment, and German companies have $22-billion invested in Russia.

The crisis began in November when Ukrainian President Viktor Yanukovich, under strong Russian pressure, turned his back on a far reaching trade deal with the EU and accepted a $15-billion bailout from Moscow. That prompted three months of street protests leading to the overthrow of Yanukovich on February 22.

Illegitimate
Moscow denounced the events as an illegitimate coup and refused to recognise the new Ukrainian authorities.

But Russia kept the door ajar for more diplomacy on its own terms, announcing on Thursday a meeting of former Soviet states in the Commonwealth of Independent States (CIS), including Ukraine, for April 4 and saying it would be preceded by contacts between Russian and Ukrainian diplomats.

Lavrov said attempts by Western countries to take action over the Ukraine crisis via democracy watchdog OSCE and the Nato military alliance were not helping co-operation and dialogue.

"I want to very briefly say that we had a meeting with US Secretary of State John Kerry on the situation in Ukraine in relation to the actions that our partners are trying to take via the OSCE, the Nato-Russia council and other international organisations – action that does not help create an atmosphere for dialogue and constructive cooperation," he said in a statement issued by the ministry on Thursday.

In a day of high-stakes diplomacy in Paris, he refused to talk to Ukrainian Foreign Minister Andriy Deshchitsya, whose new government is not recognised by Moscow.

'Who is that?'
As he left the French foreign ministry, Lavrov was asked if he had met his Ukrainian counterpart. "Who is that?" the Russian minister asked.

He stuck to President Vladimir Putin's line – ridiculed by the West – that Moscow does not command the troops without national insignia which have taken control of Crimea, besieging Ukrainian forces, and hence cannot order them back to bases.

But Western diplomats said there was still hope that once Lavrov had reported back to Putin, Russia will accept the idea of a "contact group" involving both Moscow and Kiev as well as the United States and European powers to seek a solution.

The European Union formally announced it had frozen the assets of ousted Ukrainian president Yanukovich and 17 other officials, including former prime minister Mykola Azarov, suspected of human rights violations and misuse of state funds.

'Russia! Russia!'
UN special envoy Robert Serry had to abandon a mission to Crimea after being stopped by armed men and besieged inside a cafe by a hostile crowd shouting "Russia! Russia!" The Dutch diplomat flew to Istanbul after the incident.

In eastern Ukraine, a pro-Russian crowd in Donetsk, Yanukovich's home town, recaptured the regional administration building they had occupied before being ejected by police. But police loyal to the new authorities in Kiev raised the Ukrainian flag over the building again on Thursday.

Putin has said Russia reserves the right to intervene militarily in other areas of Ukraine if Russian interests or the lives of Russians are in danger.

"As Russia spins a false narrative to justify its illegal actions in Ukraine, the world has not seen such startling Russian fiction since Dostoyevsky wrote, 'The formula "two plus two equals five" is not without its attractions,'" the state department said in the document. – Reuters